Top Posts
8 Travel Hacks to Save Money on Flights...
How to Get Paid Market Research Studies and...
10 Things No One Tells You About Iceland!
Iceland Budget
22 Things to do in Peru besides Machu...
Israel Budget ~ How Much Does a Trip...
The 7 Best Bars in Barcelona to Have...
14 Reasons to Road Trip to Florence Alabama
My Cuba Budget
24+ Best Places to Visit in China Besides...
Home TipsCompanies Review WOW Airlines Review ~ Is WOW Air good?

WOW Air first got on my radar in late 2016 because I was trying to visit Iceland for the first time.  I didn’t have any problems, and I was very surprised when I kept hearing people complain about it. I decided to fly them again with a more critical eye to provide a review.  I wanted to answer the most common question, “Is WOW air worth the cheap price?” So here is my unbiased view and some other traveler’s thoughts for some WOW air reviews. 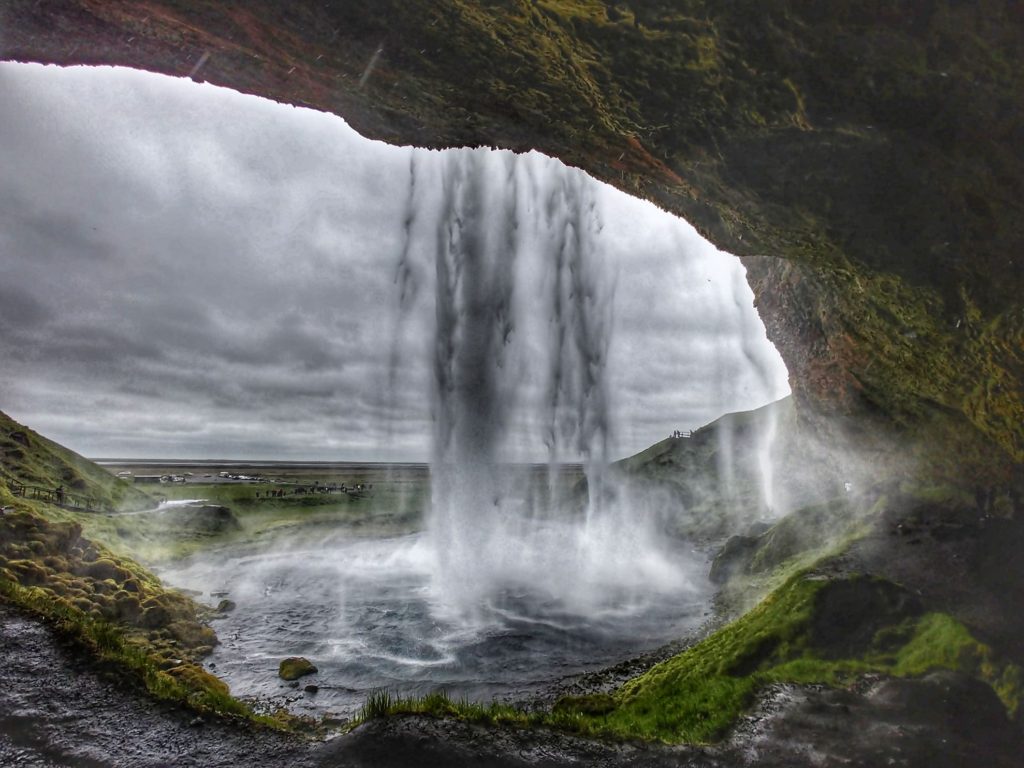 I mean, it’s worth anything to get here, right?

I mean, you can’t beat these prices!  I fly lots of budget airlines, and the biggest takeaway I have for them is to pack light and book early!  The biggest problem people seem to have when they leave their WOW Air reviews is paying for every little thing. Let’s dig deeper into that.

Want to know exact costs? – Check out my Iceland budget from winter. Or the Iceland prices when I went back again in Summer!

Budget airlines seem to operate under the model of a few set seats at a crazy low rate, and the price goes up with each new batch of seats.  They only have a limited number of seats at set prices. 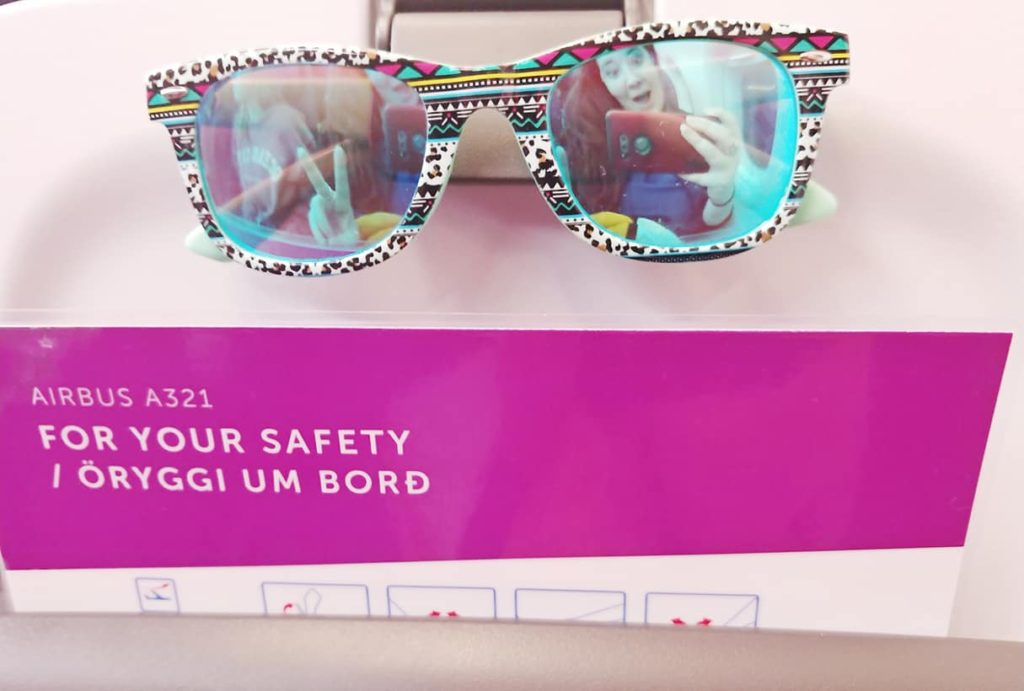 I bet you can see yourself on this flight!

“Big” airlines often include a lot more in their amenities, sure, but you’re basically paying for it in the original price. I kind of like the “Choose Your Own Adventure” cost model because sometimes I don’t need all those amenities. Most times I don’t check a bag.  I don’t drink coffee. I don’t need to sit in an exit seat. Stuff like that.

If you sit down and do the math, sometimes they end up being about the same.  You get the real savings when you bring the least amount of stuff though. Because it’s really the fees that get you.  Go here if you want to see the Wow Air Carry On cost.

If you know you’re going to get a bag (carry-on or checked), please get it online when you buy, because that’s when it’ll be the cheapest. You can add a bag later online for slightly more, but the most expensive will be at the airport.

You can find some more tips on flying on a discount airline here.

There is no entertainment on the WOW planes, which to me wasn’t a big deal. Normally I wouldn’t be able to stand a transatlantic without it, but all their flights have been overnight flights, so I always just sleep!

They do, however, have ipads which you can rent! That’s pretty cool actually.  This is another example of an amenity that you might not use on another flight that you don’t have to pay for if you’re a sleeper!

I’m probably biased here as I do enjoy purple (It’s my eyeshadow color of choice as I feel it makes my green eyes pop :D), but I love the WOW uniforms.  Those uniforms are also on very smiling and friendly employees. I’ve flown with WOW four times, and I believe I’ve been greeted by every person with a smile.

As I said, I’ve only had positive experiences, but to make this as unbiased as possible, I do want to include some stories that I heard on this trip to make this the best WOW airlines review possible.

Read More – Some surprising facts about Iceland from my first trip 🙂

I was in Newark awaiting my flight to Reykjavik, and I ran into some people about my age.  Their flight to Dallas had been canceled, they’d been stuck in Reykjavik and were then stuck in Newark.

Apparently, their plane had a malfunction, and they were irritated about the delay in getting home, as anyone would be.  I found out that they had flown WOW, and I asked them about their ordeal.

They had been given hotel and food vouchers in both Reykjavik and Newark.  Even though they were justifiably upset, I was still pretty impressed because I’ve had some major delays before, and I’ve never received any sort of recompense.

I met some people later when I was flying out of Reykjavik on my way to Egypt, and they had a similar story, except they were coming from Dallas.  They also received some vouchers (which again, I think is amazing) but had also been greatly delayed.

Their big complaint is that there weren’t really any WOW employees at the airport that could help them.  I think WOW remains a budget carrier by having fewer employees, but maybe they should think about upping that a bit for times like this.

To reiterate, it looks like once you got ahold of a person, they were able to help, but that it’s just difficult to track someone down that knows what’s going on and has the power to do something about it!

I flew Southwest (which is my budget carrier of choice, domestically) to get to my WOW flight from Newark. Southwest is the best! I book cheap flights from cities other than my home airport and then use my Southwest points to get there.

However, when I got on the WOW plane right afterward, I couldn’t believe how much more room I had.  You get a big seat on Wow Air! I believe I had at least another inch or so for my knees (I’m 5’9, so that’s tallish), but I definitely had more room on the sides.

My hips definitely touched the armrests on Southwest, but I felt no such pressure on WOW. Nice to have a big seat with WOW Air!

Where the entertainment screen would be is a little clip. I’m not suuuuuure if this is what it’s there for, but it actually held my phone up!  I could have watched something on my phone and made my own, free entertainment! 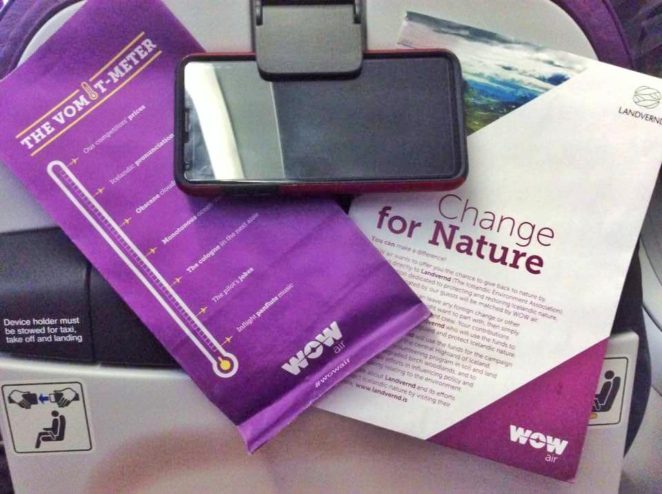 My flight from Newark to Reykjavik was filled with snarky and sassy sayings on the wall and lit with funky purple lights.  All it needed was some fun mood music, and it could have been a party!

My flight from Reykjavik to Paris didn’t have the lights or writing, but everything else was the same.  I guess just the newer planes do.

I’ve flown with WOW four times, and I haven’t had any major delays.  The last two flights went out within 30 minutes of original departure, so that’s not that big of a deal. Both flights were slightly delayed because the flight before it arrived a little later than planned. 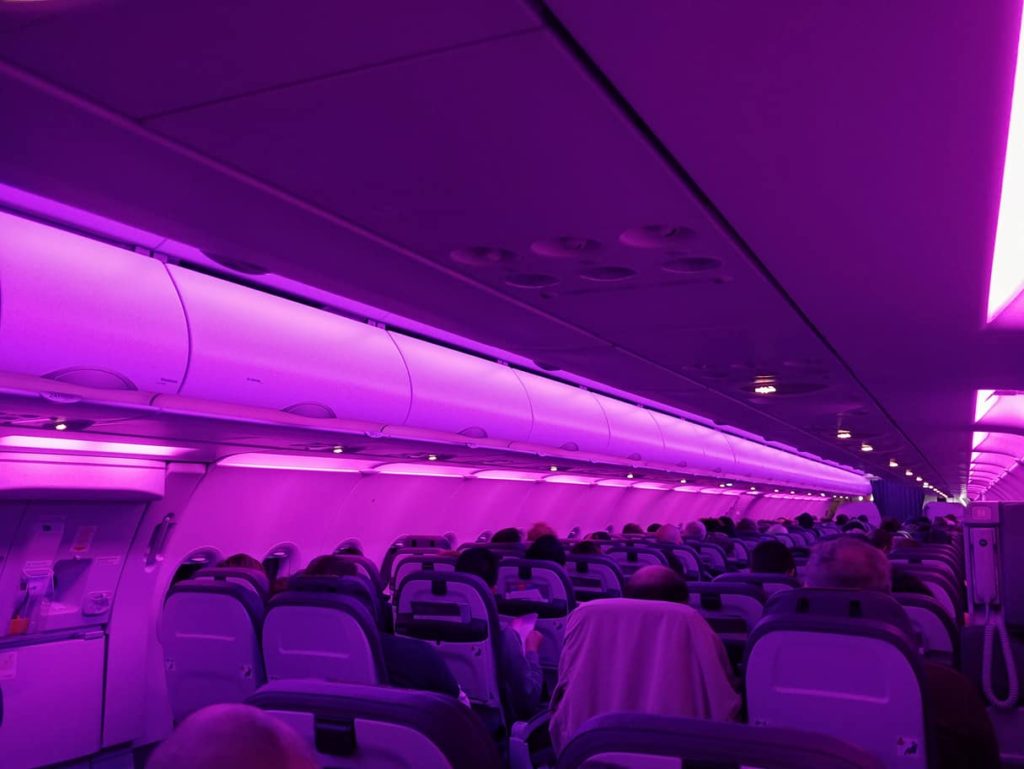 All we need is a disco ball!

Going back to the other stories mentioned in the employee section, it seemed (in those cases) that both group’s situations were due to the same malfunctioning plane.  Because a plane was grounded in Dallas, all subsequent flights weren’t able to fly.

I’m not sure if cancellations count in the timeliness category since they clearly aren’t timely since they didn’t happen.  But I guess it’s worth pointing out because if they did go out they’d probably be on time?

Hands down, it’s the price, with comfortable seats as a close second.  And if you do a roundtrip flight with them, you can create a free stopover! 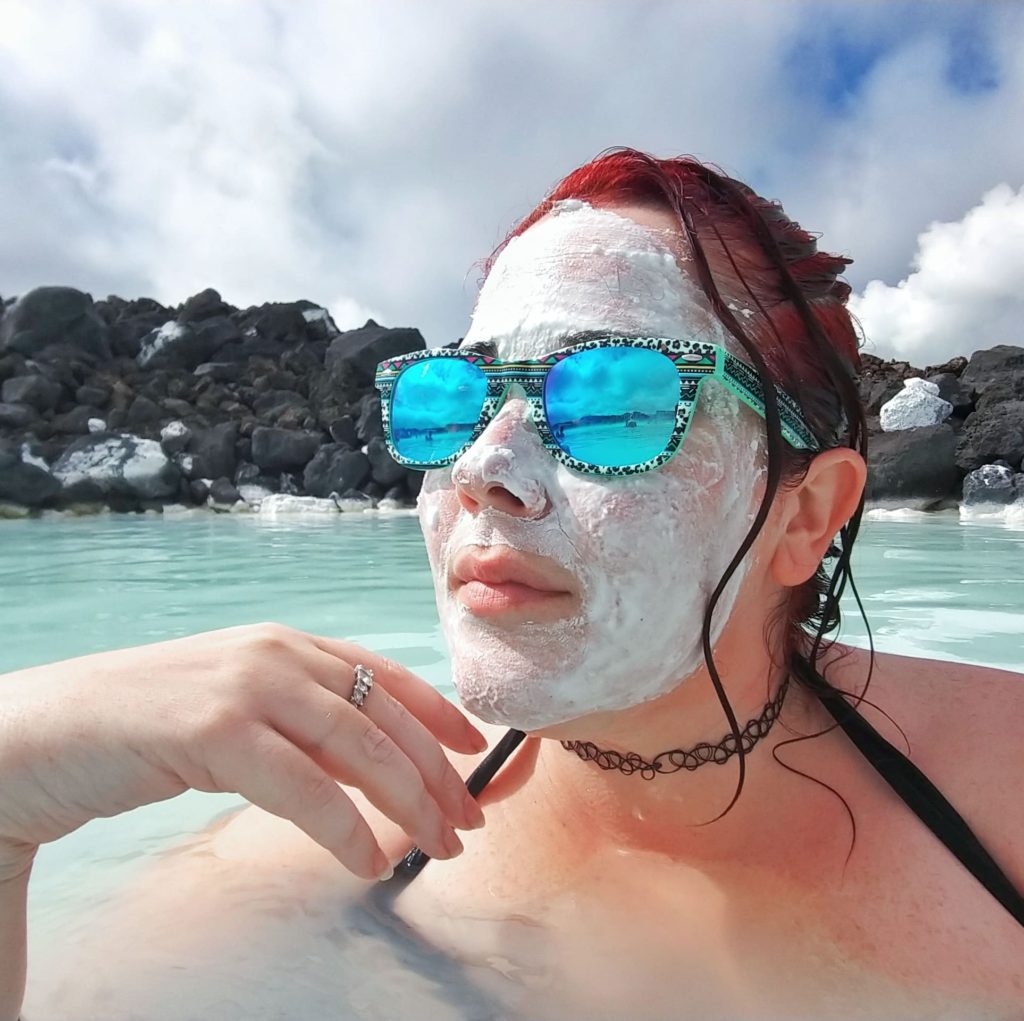 You can easily swing by the Blue Lagoon on a layover!

The general consensus seems to be that it is hard to find an employee to help you if your flight is delayed or canceled.

WOW Air is a force to be reckoned with in and out of Iceland, and it’s hard to beat those prices!  I guess just make sure you have trip insurance in case anything goes awry (of course, you should anyway).

All in all, weighing the pros and cons of WOW air, it’s still an airline that I think is worth it, and I will continue to fly this snarky and fun company  😀 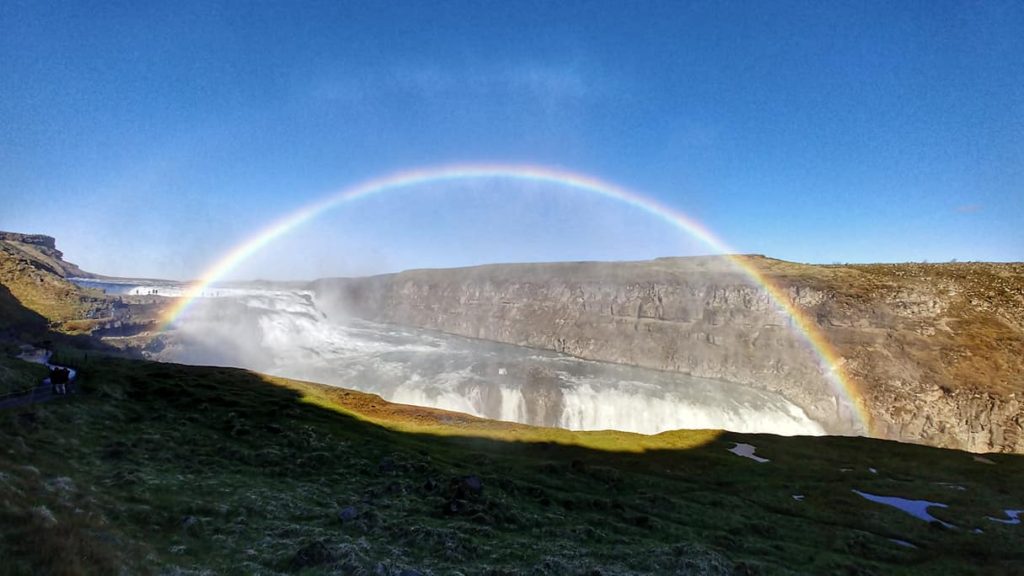 Save this review for later! 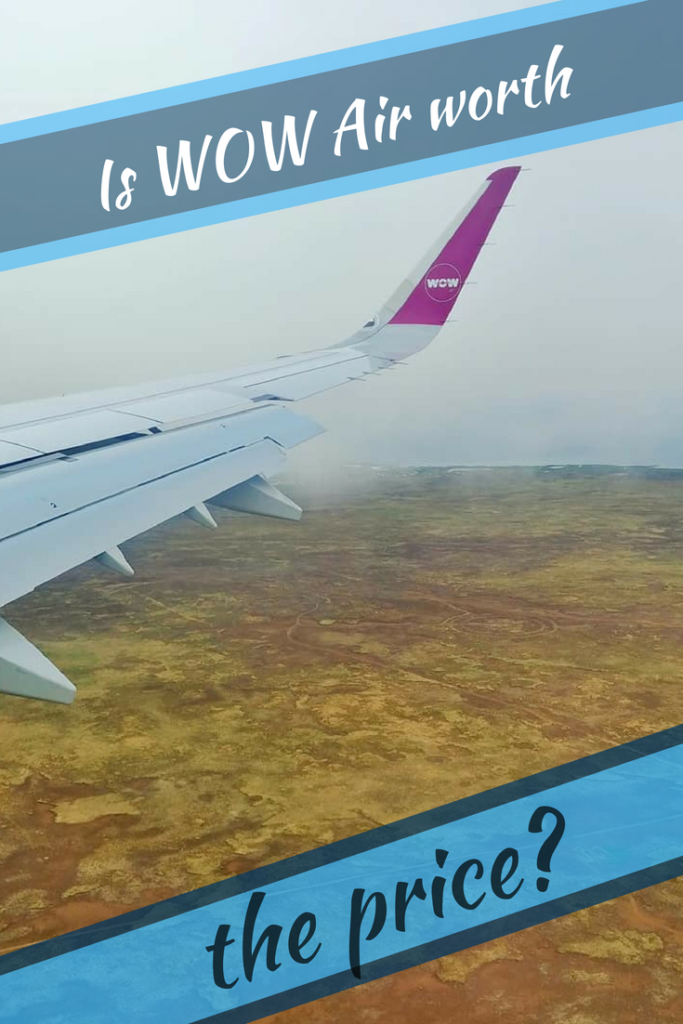 Looking for a Memphis Bar with Bar Games? Try 3!

Hi! I met you in Newark when my WOW flight was cancelled! My other teacher friend and I would love to pick your brain about how you got your blog started! Would love for you to shoot me an email so I can pick your brain 🙂 my friend also does free teacher travel.

Haha, I remember you guys! I hope you had a smoother rest of your evening! I’ll shoot you an email!

But yeah, I think if you are informed of what you are going for and you want to save some money then it would be a good choice. Now I need to go to Iceland 🙂

Their decorations were super nice! I agree that people can’t expect the same level of service with a budget airline, but that doesn’t mean budget airlines aren’t still worth it!

[…] started our trip with the Golden Circle as unfortunately WOW Air managed to lose my luggage and it didn’t arrive to Keflavik airport. So we wanted to stick […]