Top Posts
8 Travel Hacks to Save Money on Flights...
How to Get Paid Market Research Studies and...
10 Things No One Tells You About Iceland!
Iceland Budget
22 Things to do in Peru besides Machu...
Israel Budget ~ How Much Does a Trip...
The 7 Best Bars in Barcelona to Have...
14 Reasons to Road Trip to Florence Alabama
My Cuba Budget
24+ Best Places to Visit in China Besides...
Home TripsAfrica Egypt Budget ~ How Much Does a Trip to Egypt Cost?

Egypt Budget ~ How Much Does a Trip to Egypt Cost?

How much did an 8-night trip to Egypt cost?

Here’s the quick rundown. It’s broken down below to get a deeper insight! 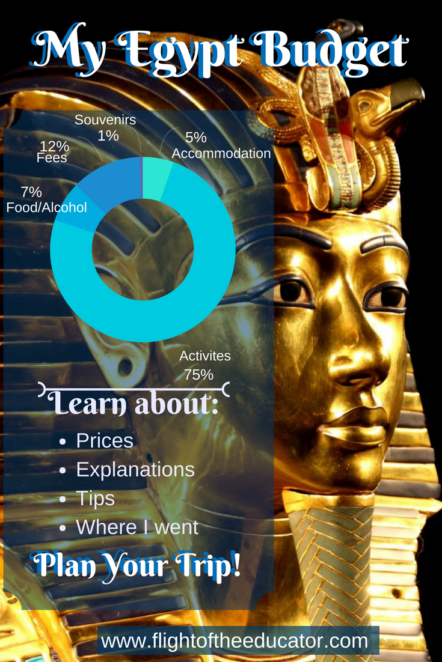 Accommodations ~ How Much Does it Cost to Go to Egypt?

Could you do it cheaper? Yes, we stayed at 4-5 star places. There are definitely much cheaper options.

Keep in mind: All my accommodations were included in the tour price so that affects my total trip to Egypt cost. 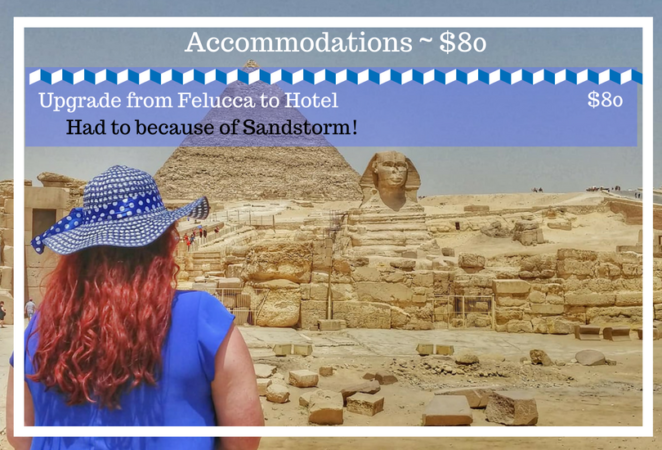 My nightly room was included in my tour rate, so if you want a better breakdown of the hotels and what they looked like, you’ll have to check out my review of my tour!

However, there was one night that there was a “sleep on a felucca” option, that my friend and I opted out of because of the heat and an impending sandstorm. It ended up being $80 for the night, which we split.

Transportation ~ How Much Is it to Go to Egypt?

Could you do it cheaper? I’m actually unfamiliar with public transportation since my tour picked me up and dropped me off at the airport. We also used a bus or boat included in the tour.

Keep in mind: All costs were included in the tour, so that can greatly affect your planning how much does it cost to go to Egypt.

How fun to have a $0 in a category! That doesn’t happen often!

Food ~ How Much Does it Cost to Visit Egypt?

Could you do it cheaper? Absolutely! There were many times that I got a more expensive dish since I decided I deserved it for melting all day during the heat.

Keep in mind: Some food was included. 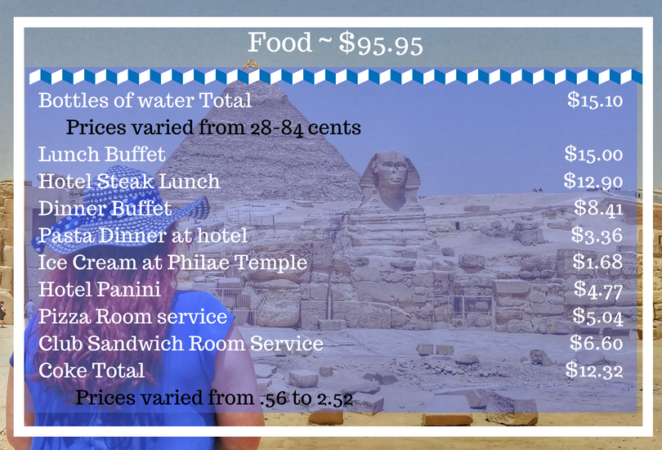 Most of the places where the food was included were buffets. They had a wide variety of starches, proteins, and vegetables. 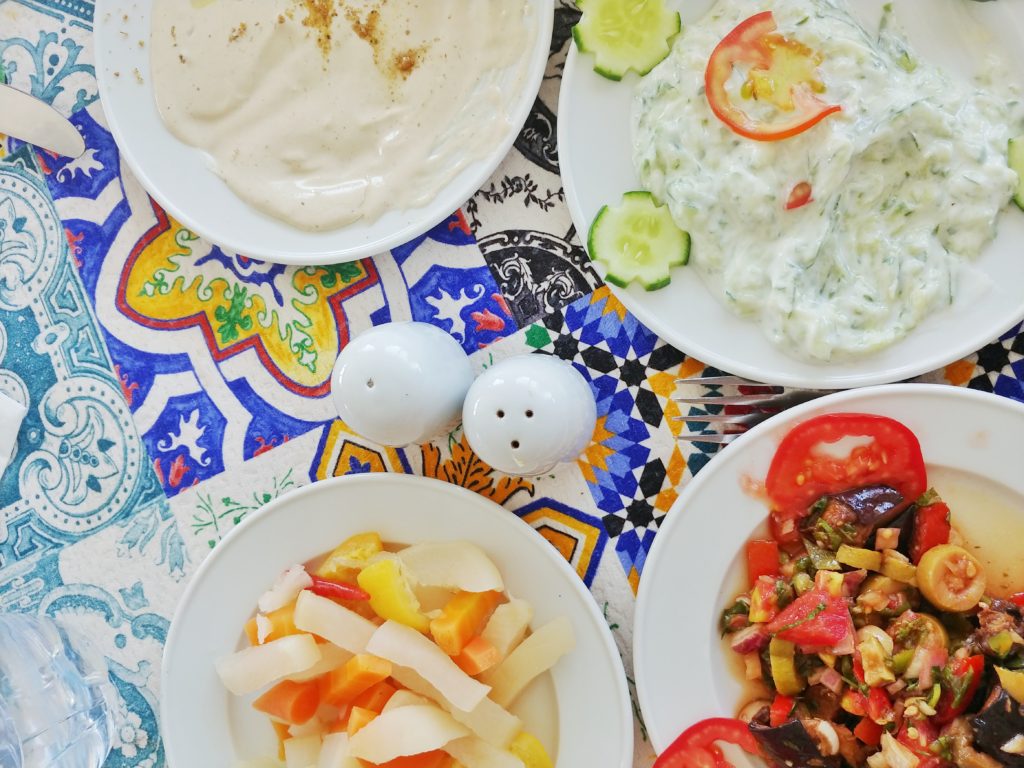 When the food wasn’t included, we often ate at the hotel where the prices were pretty reasonable. The most expensive thing I got was a steak for about $12. Turns out it was a mistake because it was wildly overcooked. If it hadn’t been, it would have been a pretty good deal!

Of course, a fair bit of the food budget was just water! I was trying to stay hydrated in the heat! The waters were normally about 30 cents, but they could get more expensive at restaurants.

If you’re more of a foodie than I am (which is basically everyone but children lol), then I suggest reading this Egyptian Food Guide.

Alcohol ~ How Much Would It Cost to Go to Egypt?

Could you do it cheaper? I feel this one is obvious… 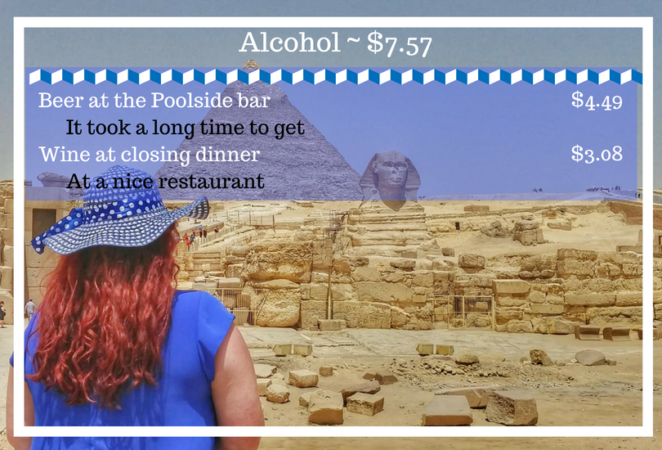 It was actually much too hot for me to want to imbibe too much. It also took a really long time to get any service and then more time to get what you ordered.

I did enjoy a lovely pool-side drink since it had a swim-up bar and a nice glass of wine for the closing dinner. 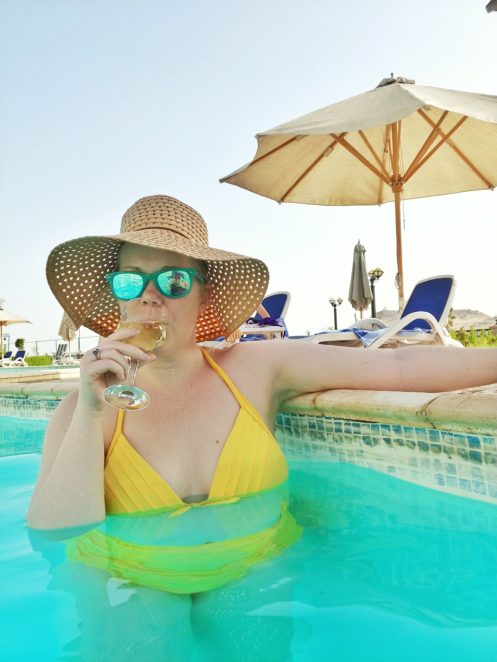 Activities ~ How Much Does it Cost to Travel to Egypt?

Could you do it cheaper? Many of these were optional, but I honestly felt like they were all worth it, so they really must be factored in to the trip to Egypt cost.

Keep in mind: Aren’t these the reason you want to go?? 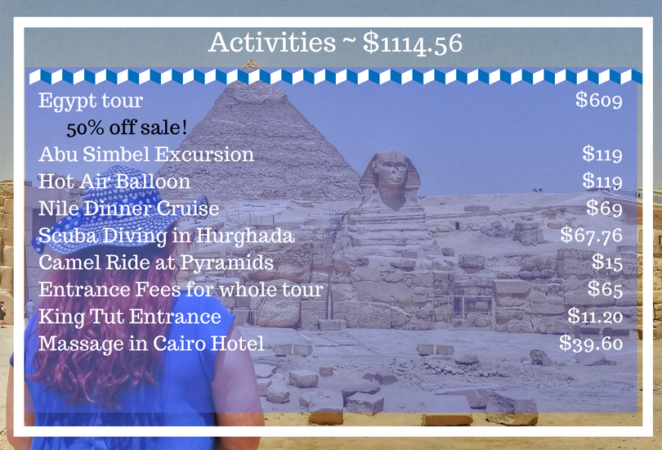 Let me start with the biggest ticket price–the tour itself. I definitely think it was worth it because it paid for so much other stuff. I lucked out and I got the trip at 50% off during a sale. I suggest following their facebook page or getting on their mailing list to try and score a similar deal!

If you’re keen to just save money, and you’re fine with a larger group (max of 50 in comparison to a max of 20), there are tours that I found that are even cheaper than this (even with the sale).

Want a cheaper tour? – Here is a tour that is even cheaper! And here’s an extra 5% off no matter what tour you get!

Within the tour were a few optional excursions. I honestly felt the ones I did were amazing and totally worth it. I met up with some other people on the tour that did some more. I wrote a blog post for the company that breaks down all the excursions if you’d like to read about it here. 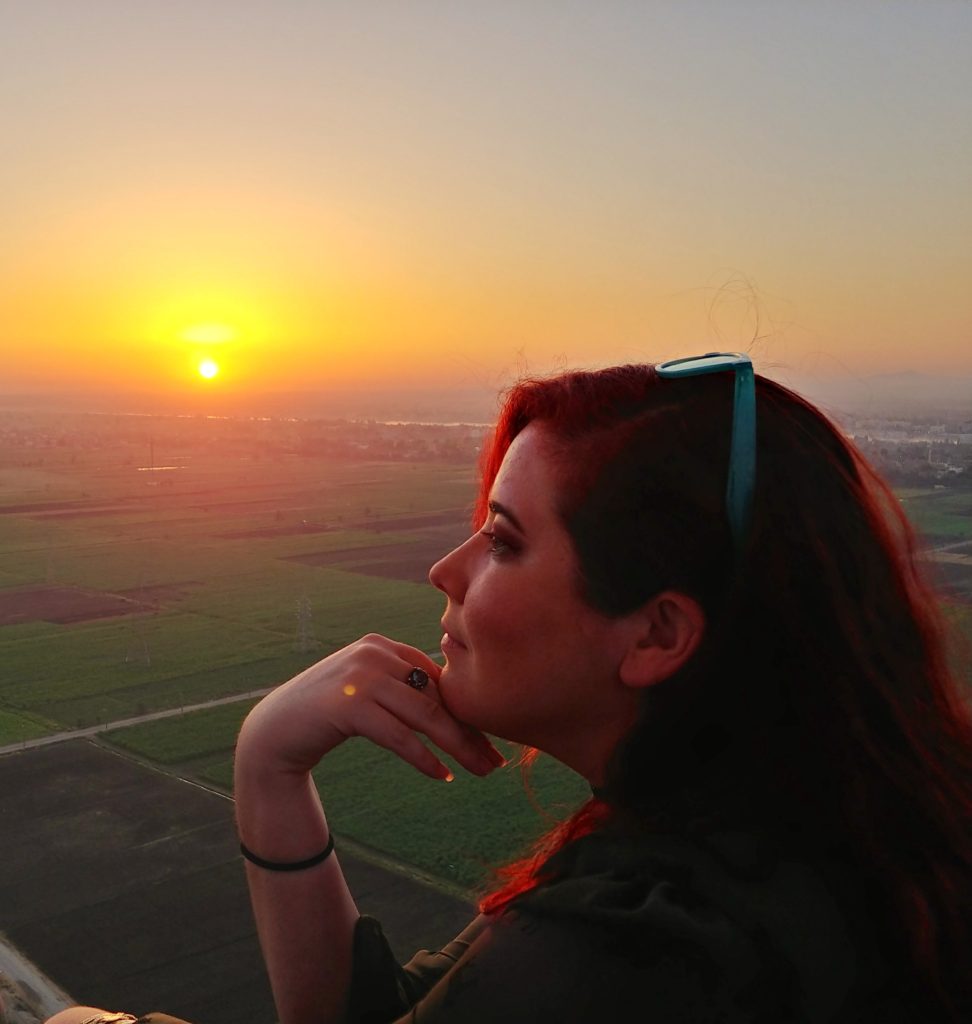 Separate from the tour, I decided to go diving in Hurghada. The Red Sea is famous for its diving, and I wanted to check it out! They also have snorkeling on the same boat for people that aren’t certified. It’s just as good of a time!

Going to the Red Sea?- Read about my experience scuba diving in Egypt!

I was a little surprised to learn that not all the entrance fees were included, so that was an extra expense. It wasn’t a huge deal, but it was definitely an expense. They collected it at the beginning of the trip to save time, so we didn’t ever have to wait in line.

Then there were a few super optional activities like a camel ride and a massage! I’d already ridden a camel in Morocco, so I wasn’t as keen to do it again, but I did because I wanted to recreate a picture of my grandparents! Also, the Egyptian Camels were MUCH taller than the ones in Morocco! Must be because Morocco has dromedaries not camels. 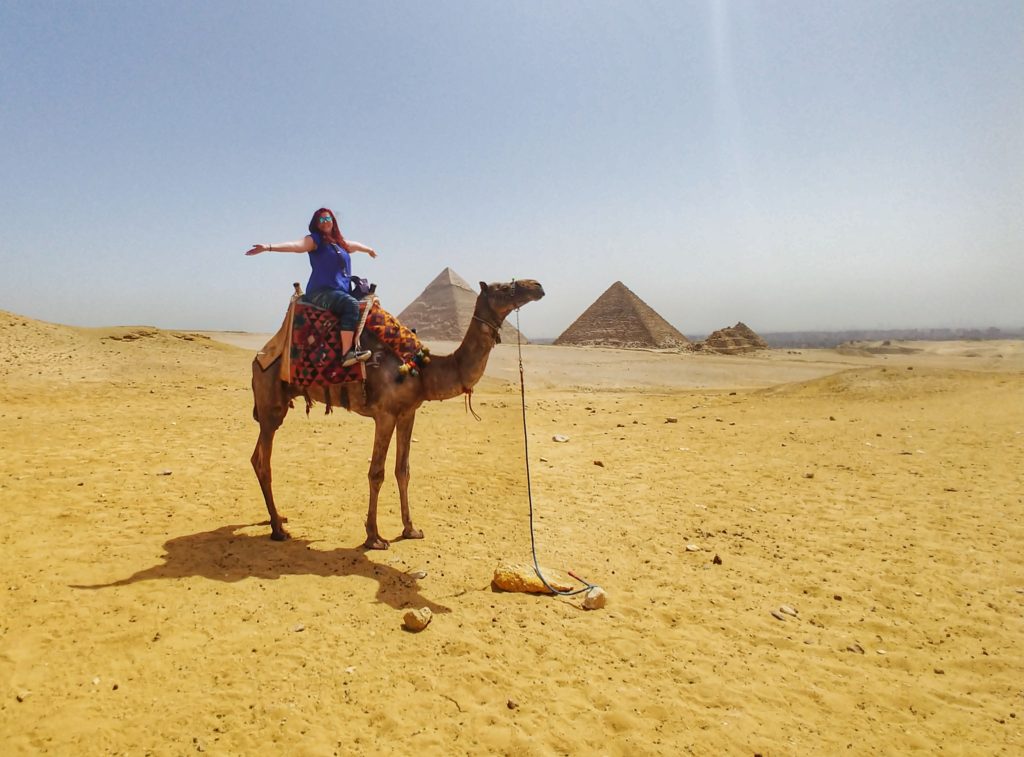 Could you do it cheaper? If you’re good at haggling!

Keep in mind: I don’t really haggle too much because I feel like they need the money more than I do. Also I normally buy spoons when I travel, but my grandmother had already been to Egypt, so I decided not to get another! 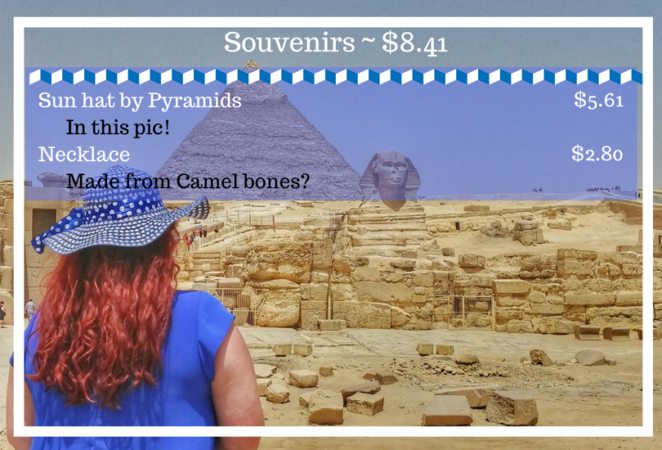 The first souvenir was more of a necessity than a souvenir! I had forgotten to bring a hat, and it was so hot on the first day, I realized my mistake! My guide ended up haggling for me because he said he could get a better price for me.

He ended up getting a really ugly one, and I asked to swap, and I ended up with this blue one! I wore it every day, and it came in handy not only on Egypt, but in Jordan and Israel as well! It was definitely worth at least 3 times what I paid!

I ended up also buying a necklace later because it was supposedly made of camel bones. I’m not sure if that’s true, but it was white and pretty, and it was cheap. My friend and I ended up getting similar ones, so we could commemorate our friend trip 🙂

If you’re really excited about the Egyptian Bazaars, check out this guide on What to Buy in Egypt to get some inspiration!

Could you do it cheaper? Avoiding some of these activities is the only way to avoid these fees. There isn’t a way to change the prices since they are set.

Keep in mind: I’ve also included tips in this section because it sure seemed like a lot of tips were needed!  And you can’t figure out how much would it cost to go to Egypt without them! 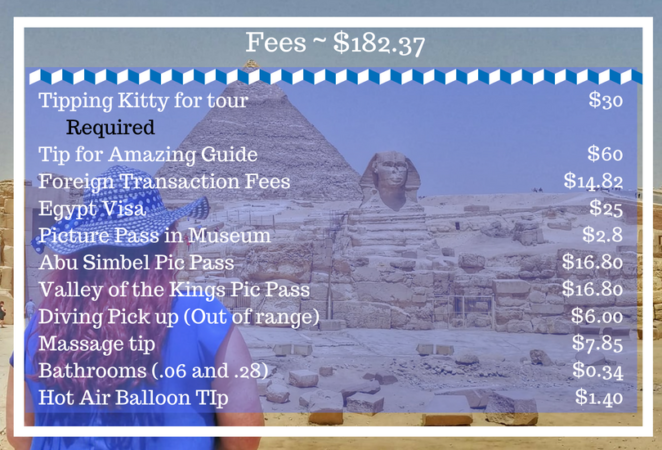 The biggest portion of the “Fees” section are the tips. First, there was the “tipping kitty” which I had to pay at the start of the trip. That was for all the drivers, baggage handlers, etc that we’d encounter throughout the trip. Rather than wasting time and having everyone deal with that everytime, they collect at the beginning of the trip, and they distribute.

I also ended up tipping our guide the most I’ve ever tipped a guide because he was AMAZING. Waleed was an absolute gem and so knowledgeable. He has a Masters in Egyptology, and he had a gift of recounting these ancient facts into vibrant stories. Worth every penny.

There were a few extra activities that weren’t necessarily covered in the normal tipping kitty, and other times we weren’t sure, so we tipped anyway. Also, most of the time Waleed managed to find us free, clean bathrooms, but sometimes no! Just make sure to have small bills! 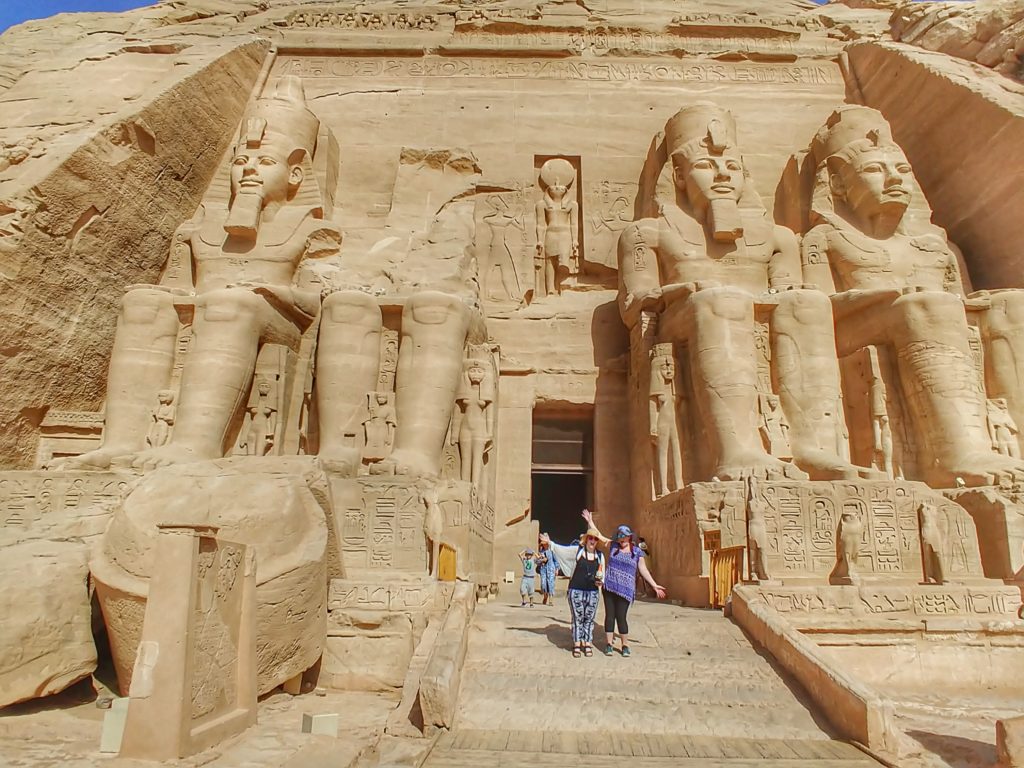 There were also some picture passes required at certain stops. We ended up pooling our money to buy a pass for one person to distribute the pictures later. Make sure that person takes good pics!

I hope you find this helpful for your trip! Let me know what prices you paid and where! 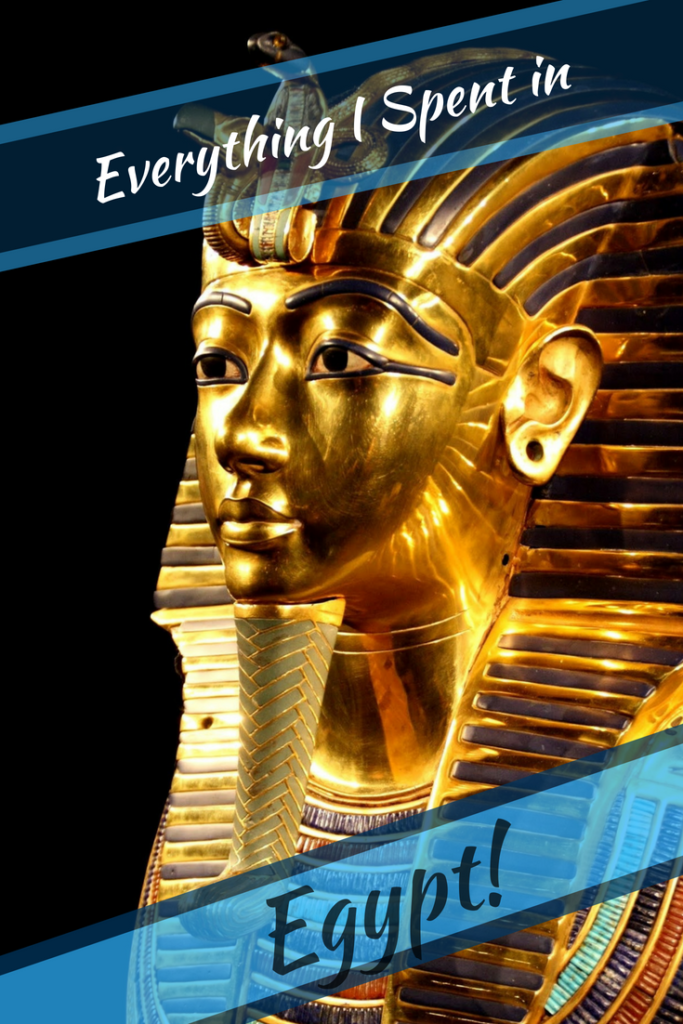 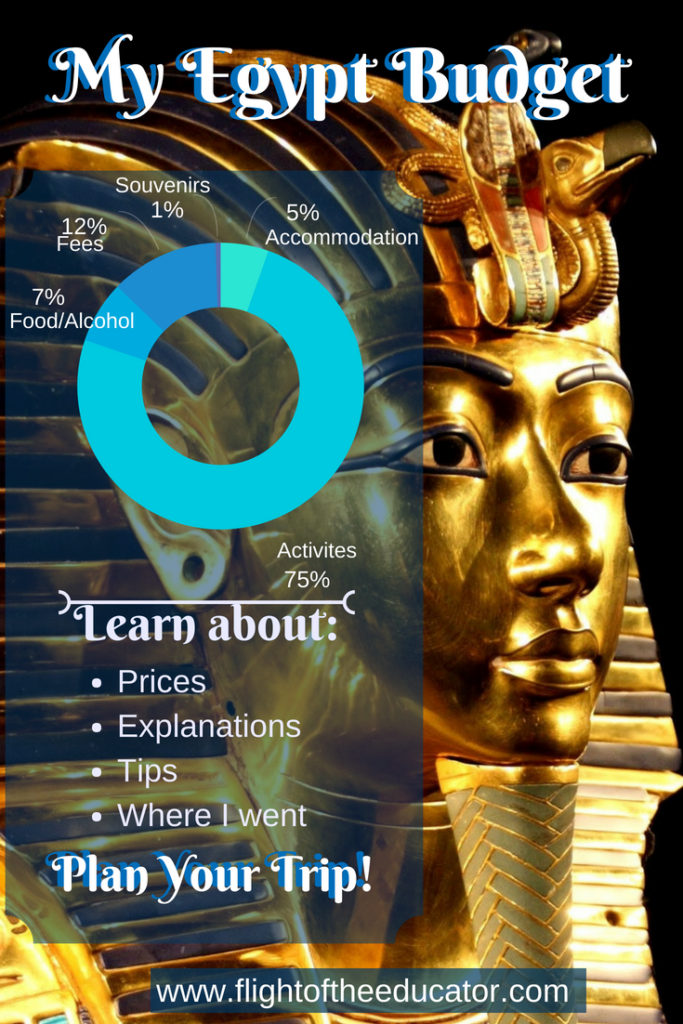 does this include flight?

No, I don’t usually include flights because people could be flying from anywhere! But it did include an internal flight from Hurghada back to Cairo!

[…] our own Egypt trip itinerary and were pleased to find that it worked like clockwork (and was budget-friendly, to […]

[…] For a more detailed cost breakdown, read: How much does a trip to Egypt cost? […]

[…] Additional Reading: Egyptian Food Guide Must Eat Foods When Visiting Cairo, Egypt Egypt Budget – How Much Does a Trip to Egypt Cost? […]

[…] Check out this interesting read about what a trip to Egypt would cost? […]

I so enjoy living vicariously through your travels! But girl, I don’t think I can handle the heat. I’m glad you found that great hat and more glad that it protected you.

Luckily it was a dry heat! Not as bad as humid!