Top Posts
8 Travel Hacks to Save Money on Flights...
How to Get Paid Market Research Studies and...
10 Things No One Tells You About Iceland!
Iceland Budget
22 Things to do in Peru besides Machu...
Israel Budget ~ How Much Does a Trip...
The 7 Best Bars in Barcelona to Have...
14 Reasons to Road Trip to Florence Alabama
My Cuba Budget
24+ Best Places to Visit in China Besides...
Home TypesAdventure My Trans Siberian Train Cost (Tour and Extras!)

I was finally able to take my Trans Siberian Railway holidays through China, Mongolia, and Russia!  I’ve separated the Trans Siberian train cost for the train trip by category, so you can see what I spent, but then also figure out how to apply it back to yourself.  This was a bucket list item for me that I had to put off because I couldn’t get my visas on time!   But now I have this trans siberian railway blog to present to you.

If you’re interested in historical places in China, things to do in Moscow, or a Mongolian travel itinerary, please check those links for more info!

Fun Fact – Most people use Trans Siberian Railway and Trans Mongolian Railway interchangeably!  They think it’s just a Moscow to Beijing train or Beijing to Moscow, but it also depends what other stops you make!  This is whether or not you include Mongolia or Vladivostok.  I personally hit the 3 major cities of Beijing, Ulaanbaatar, and Moscow.  I had to add on a trip to St. Petersburg as an extension, and I recommend that you do too!

What is the Breakdown of My Trans Siberian Train Cost for a 16-night trip?

Could you do it cheaper? It all really depends on your Origin.

Keep in mind: Your Origin!  Where you start your journey will definitely impact the price.  Please read my post about how to score the best deals possible on Skyscanner.net.     To get these cheaper fares, I also used my Southwest points to get to Canada and home from Cuba.  I post good deals when I see them, so always keep an eye out on my FB account! 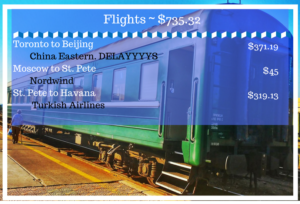 I was supposed to go on this trip last summer, but I wouldn’t have gotten my visas in time, so here I am!

After doing a lot of research and using my trusty Skyscanner Hacks that I taught you, I found that one of the cheapest ways to Beijing was through Toronto, and back was through Cuba!  So that’s where I went by using my Southwest points. (Coming soon, budgets for Niagara Falls and Cuba).

Could you do it cheaper?  In a few places.

Keep in mind:  Some of the places I stayed at were included in the tour. 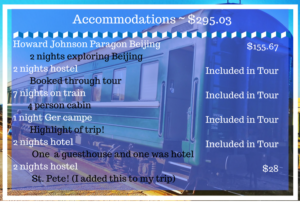 The Howard Johnson in Beijing was so nice.  I decided to go with a hotel because I knew I was going to be sleeping on trains and be around a lot of people for the duration of the trip.  A nice bit of luxury and privacy before I started!

The rest of the accommodations were included in the tour.  I opted to add St. Petersburg to the end of my trip, so that’s why those were added.

Could you do it cheaper? There were a few times that  I could have taken public transportation to and from the airport, for example.

Keep in mind: Most of my main transportation cost was in the tour. 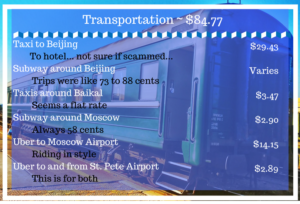 Uber wasn’t available until Moscow and St. Pete, and the prices were so reasonable, I opted for it instead of the hassle and time of public transport.  In Lake Baikal, taxis were easier than walking!

Could you do it cheaper?  If you brought more food with you on the train.

Keep in mind:  I did bring a fair bit of food with me.  Mostly just noodles and pop tarts. 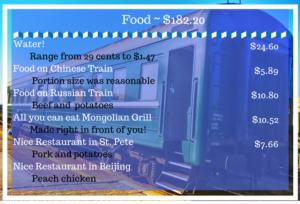 Water not being free in restaurants has confused me, but the prices of the bottles weren’t too bad.  I mostly ate the noodles and such that I brought on the train, and when I was off the train, I’d treat myself.  I got a pretty boss steak in Mongolia for only about $10!  Often on the train platforms there would be vendors with food, so you could try local food from Russia, Mongolia, and China!

Could you do it cheaper?  Not drink on top of the wall!

Keep in mind: I mostly just got beer and obviously cocktails are more, but not much more. 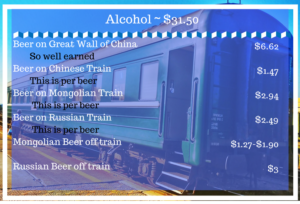 The drinks weren’t too expensive on the train, but the real trick was finding them cold!  You often have to mime being cold to try and find one! Not sure if it was always like that, but I think the fridge was out. She had some tucked away in the back though.

Could you do it cheaper? I’d do all of the activities again except for the boat portion of the Hop on Off trip in St. Pete.

Keep in mind: Some of these prices also include food! 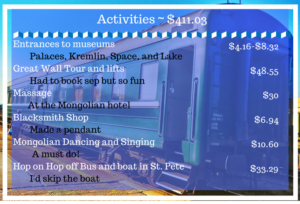 All the of museums in all 3 countries were reasonably priced.  The Great Wall Tour was about $30, but it included transportation for the whole day, lunch, and entrance to Tombs, Tea House, and a Jade Factory.  The only thing that wasn’t included were the chair lifts to the top and the slide down. SO FUN.

If you make it out to St. Pete, check out these St. Petersburg points of interest!

Could you do it cheaper?  Well sure if you don’t do souvenirs!

Keep in mind:  A few were more expensive than I usually go for. 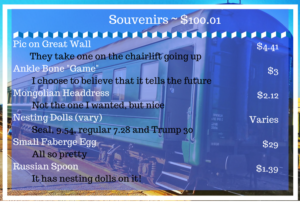 I collect small, decorative spoons from countries that I’ve visited (a collection I’ve inherited from my grandmother). 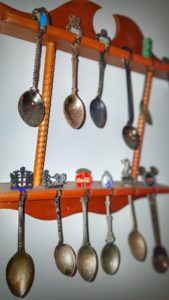 The ankle bone game is WAY fun!  You can pick it up in Mongolia!  You roll 4 different ankle bones and translate the outcomes into your fortune!  These definitely aren’t necessary costs on any trans Siberian railway holidays, but surely everyone gets some sort of souvenir!

Could you do it cheaper?  Countries without visa requirements would be great, but alas.

Keep in mind:  I managed to get my Russian and Chinese visas slightly cheaper. Read below! 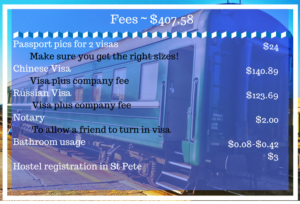 I managed to get my visas slightly cheaper by first mailing them to friends that lived in those cities.  Since I live in Georgia, those cities were Houston and DC.  The notary was because Russia wanted proof that I was allowing my friend to pick up my packet.

Could you do it cheaper?  Laundry could be done cheaper

Keep in mind:  Travel Insurance in mandatory for the tour I did, though not if you don’t use a tour.

Then there is the tour itself!  Stay tuned for a detailed review of the tour.  I chose Vodkatrain’s Budgeting Bolshevik because it was by far the cheapest option I could find! Please let me know if you found cheaper, but I think this is it!  They also have several other options.  I wanted a tour because the train system seemed too complicated for me to want to deal with on my own! If you want to tackle it though, here is a China train travel guide to assist you.

Want a discount? – I bought my tour on Tourradar.  Click here to get 5% off whatever tour you choose!!

I picked the Budgeting Bolshevik because I wanted to go to Lake Baikal and I didn’t want to pay too much!  It’s listed at just under $1,600, but I managed to pay $1448.82 because I bought mine on Black Friday at a discount 🙂  They have a lot of options for other citie and lengths.

I hope you find this helpful for your trip! Let me know what prices you paid and where! 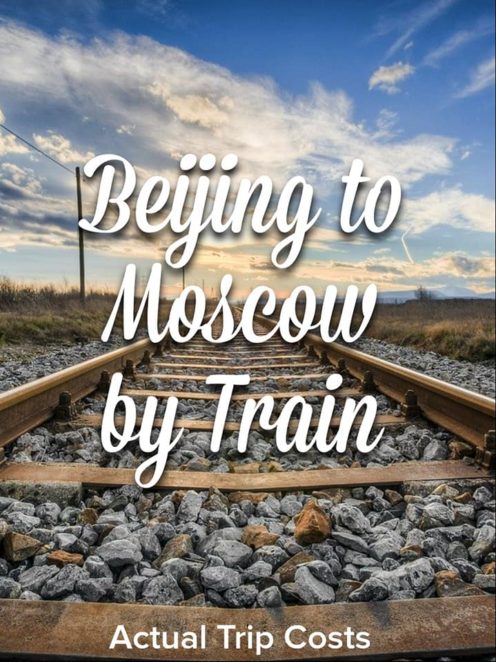 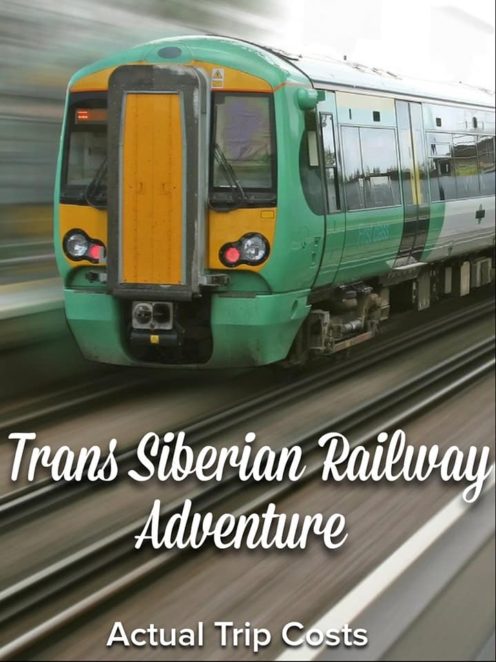 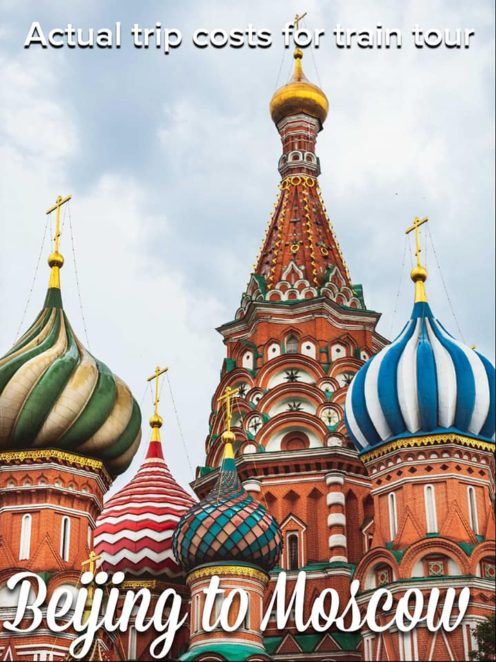 Hello! Someone in my Facebook group shared this website with us so I came to check it out. I’m definitely loving the information. I’m bookmarking and will be tweeting this to my followers! Great blog and amazing style and design.

I’m so glad it was helpful!

This is a very useful post. The transmongolian has always been on the top of my bucketlist for years now. What scares me is the price, I’ve been looking at doing it on a tour through a company. What scares me more is tours are often more expensive than doing it solo (as they need to make a profit). As you’ve quoted your spends for solo, for somewhat I feel it will be a lot more for a group! I best get saving…

Hey, I just sent you an email about it!

[…] Republic, the home to the largest Siberian ethnic group. It’s also the starting point of the Trans Mongolian Railway. The city is surrounded by deep steeps and remote landscapes that make this region look like one of […]

[…] But that was more than 8 years ago. Time and prices have changed, nowadays, the costs of the train voucher from Moskow to Beijing via an agent will cost you around € 700/ $ 700. Check Carly’s post about her Trans Mongolian Railway budget in 2017. […]

[…] a breakdown of the budget for the Trans-Mongolian Railway – but note that this fellow blogger chose an organized tour, which makes the trip easier, but […]