Top Posts
8 Travel Hacks to Save Money on Flights...
How to Get Paid Market Research Studies and...
10 Things No One Tells You About Iceland!
Iceland Budget
22 Things to do in Peru besides Machu...
Israel Budget ~ How Much Does a Trip...
The 7 Best Bars in Barcelona to Have...
14 Reasons to Road Trip to Florence Alabama
My Cuba Budget
24+ Best Places to Visit in China Besides...
Home TypesAdventure Top 10 Surprising Things About Ecuador!

I was able to take a journey Ecuador with my students, but even if you have your own Ecuador itinerary, these are some interesting facts I learned about this country!

1. The Galapagos Islands are a part of Ecuador! 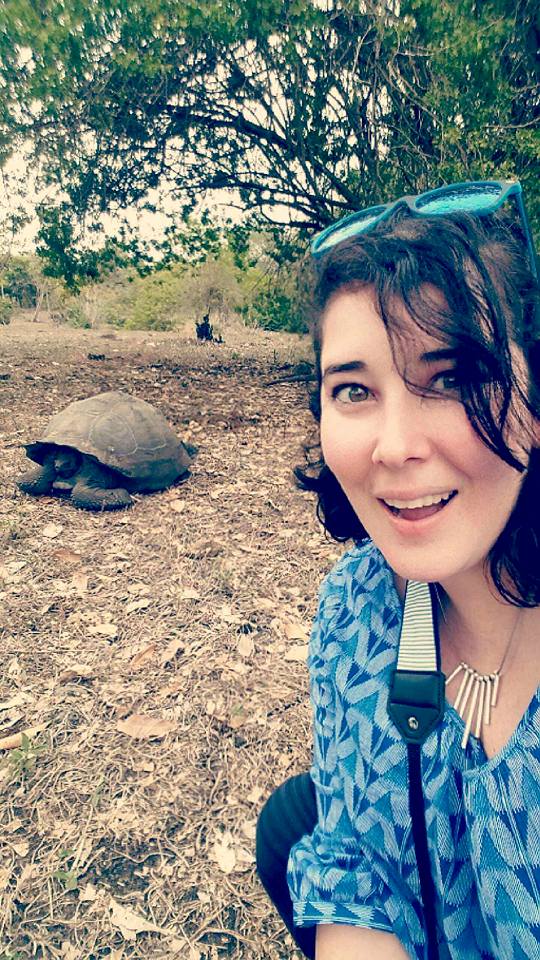 I guess I’d never really thought about which country claimed them until my students and I decided on this as our summer trip!  It was free for me to go on which you can read about here!  The islands themselves were a bit of a surprise. They were a lot drier, browner, and rather more desert-y than I had previously pictured in my mind, but at the same time also more populated? I guess I was picturing Jurassic Park but without the dinosaurs… well, turtles can totally count as tiny dinosaurs right? Funnily enough, saw a guy who kinda looked like the Jurassic Park guy. You can’t tell me this isn’t funny. Jurassic Park Guy! What’s really funny is about 2 weeks before this in Atlanta, I saw another lookalike at Target!

2.  The Native Culture is still strong! I love the Native Women’s clothing!

I expected a little of the native clothing perhaps out in the country, but you could still see them in the cities as well!  How beautiful to see their brightly colored outfits in the grayness of the cities or contrasting in the green of the countryside. My new additions to my collection! The guy told me one was Greek, but it’s Ukranian :/ I guess I have to go to Ukraine!

Ok, this one was a bit of a bummer since I collect foreign currency.  Apparently, they abandoned their original currency, the Sucre, quite a while back.  Luckily, I managed to find a booth in the Mercado Artisanal!  Apparently, I’m not the only nerd that collects money! This guy had so many other currencies that I was able to even find some from countries that had switched to the Euro!  This could have been a list of sad interesting facts about Ecuador if I hadn’t found it!

4.  There are 4 different “parts” of Ecuador 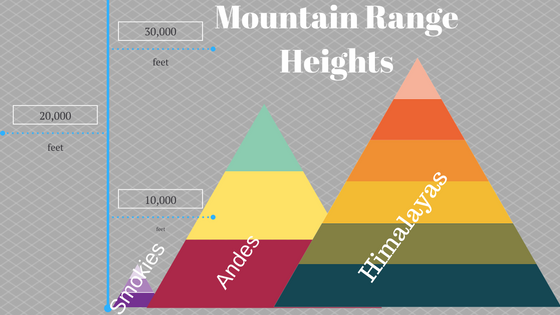 A comparison of mountain ranges’ heights

There are the mountainous region of the Andes, the rainforest of the Amazon, the coastal region like Guayaquil, and of course the Galapagos. While we’re talking about the Andes, HOLY CRAP! Those are some tall mountains.  I made a silly visual to show you why my mind was so blown.  So the Smokies are probably the mountains I’ve seen the most often. Those are on the left.  On the right are the tallest mountains in the world in the Himalayas. The Andes are monsters!  And normally, I’ve seen rocky or tree-covered mountains.  These were predominately covered in well mapped out farmlands. Surprise Surprise, the government gave the natives the most difficult to farm plots :/

5. Mt. Everest isn’t technically the tallest mountain in the world! 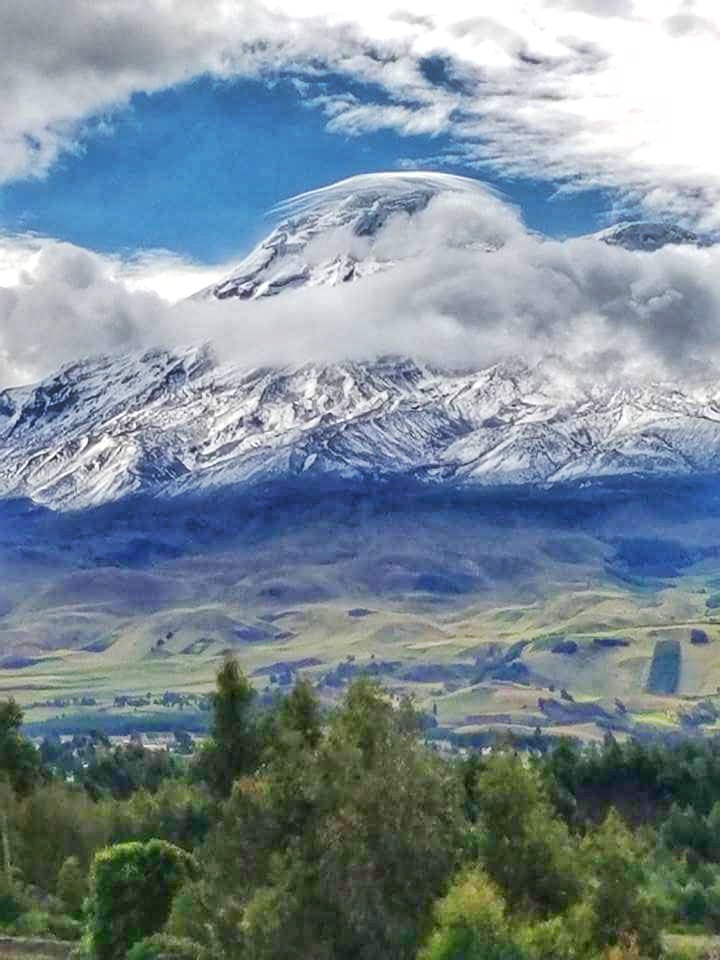 Chimborazo! A monster, but what a beautiful monster!

Turns out, it’s Chimborazo. It dominates the countryside, and because it’s on the equator, it’s technically farther away from the Earth’s core than Everest. The more you know.

#1 is Galapagos and #2 is Quito! Well how about that! Why is this not touted more!? And how cute is this little snuggle bear that I wasn’t allowed to snuggle 🙁

7. Darwin couldn’t wait to GTFO of the Galapagos 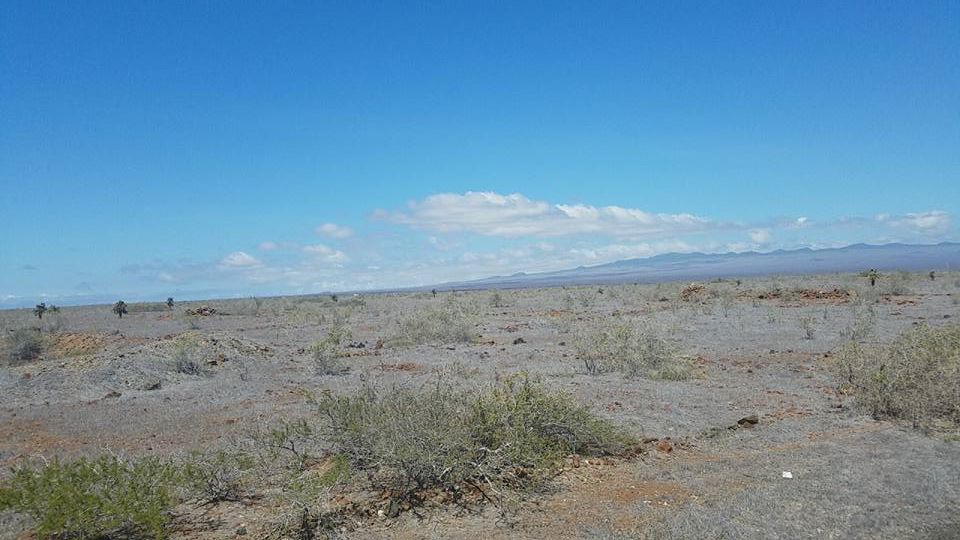 Our guides told us that actually a lot of people were excited to get off the Islands. It was pretty hot and rather barren, so I guess I can’t say I’m too surprised. However, it still struck me as being so different from what I was always told, which is why it was added to this list of interesting facts about Ecuador! 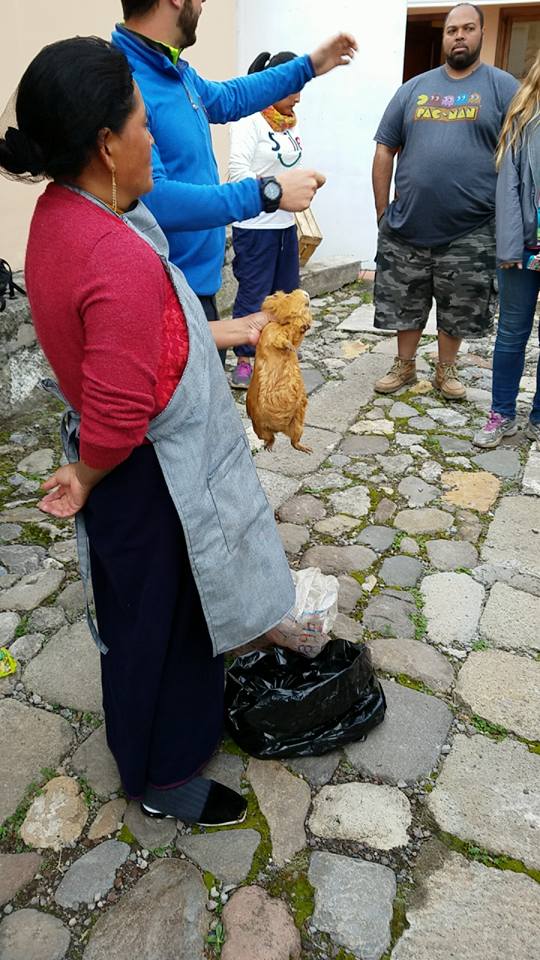 I figured the before picture was better than the afters or durings:/

It’s called Cuy, so be careful. Apparently, it’s quite a delicacy and is used for important occasions as well.  For us, a number of us were interested in trying it, and our guides made us watch the process.  That was a bummer. She was pregnant, and I would say that as a whole… we didn’t eat a whole lot of it :/

9. There are penguins, WHAT!  But a decided lack of boobies 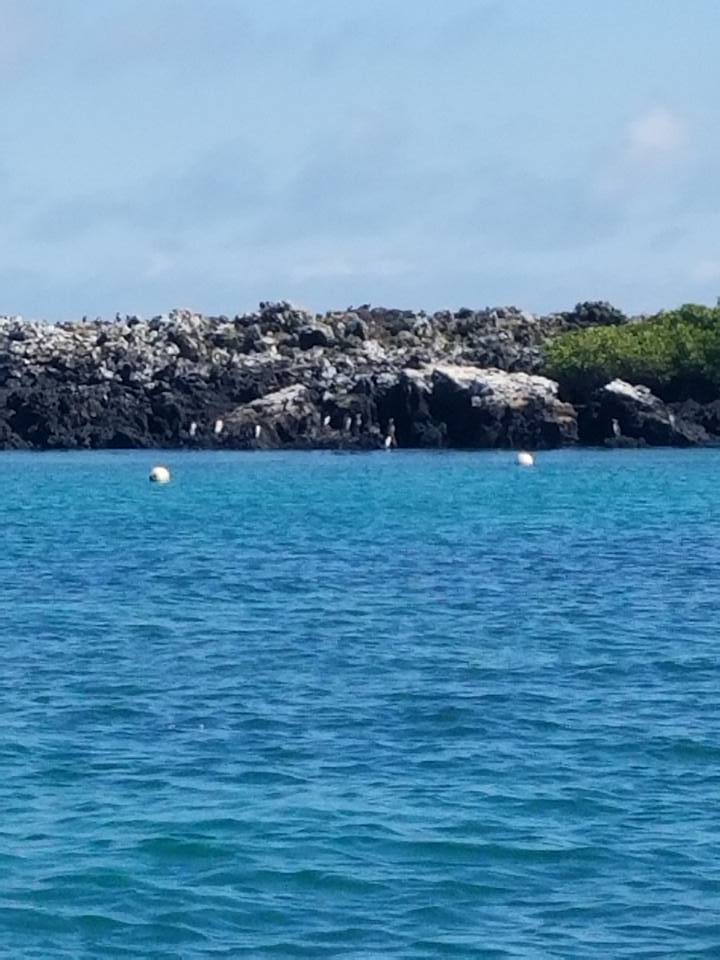 Somewhere in this picture… is a boobie.

As birds go, I was kinda expecting it to be boobies bounding about.  I think we saw one in passing… on a speedboat… The penguins were hard to get pictures of because they were zooming about, but they were there!   And would you believe that there were even flamingos?  They are my favorite collective noun for animals because a group of flamingos is called a Flamboyance! How did they even get there?  Well, that leads me to my next point…

10. Nothing is technically native!

The Galapagos archipelago is made form Volcanoes (There are actually some really cool caves in Galapagos that are made from lava tunnels!) So any species that are currently there were washed ashore or flew there.  That would explain the lack of mammals!  Here’s a more explicit breakdown of theories.

11… The Equator runs through it! 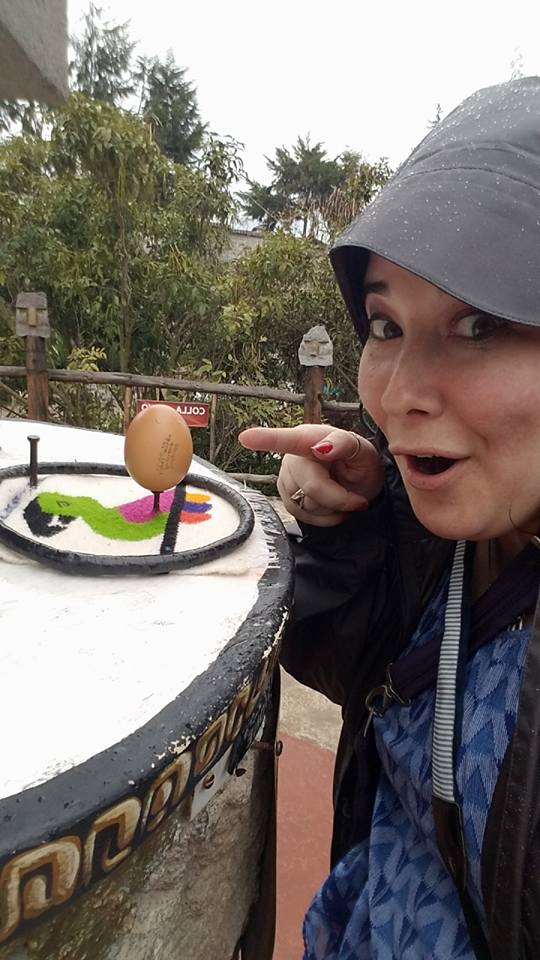 I balanced an egg!

I’m sure you knew that, or you could have figured it out! What was really cool about it though is how the equator and the Earth’s magnetic forces can affect things!  The museum that we went to had a bunch of fun activities for the kids to see how those forces work! And, well I was excited too!  Balancing an egg!  Watching water spin differently based on which side of the equator! And most surprising of all was the difficulty of pushing someone else’s arms down! If you liked it and want to share, or save for later… pin it! 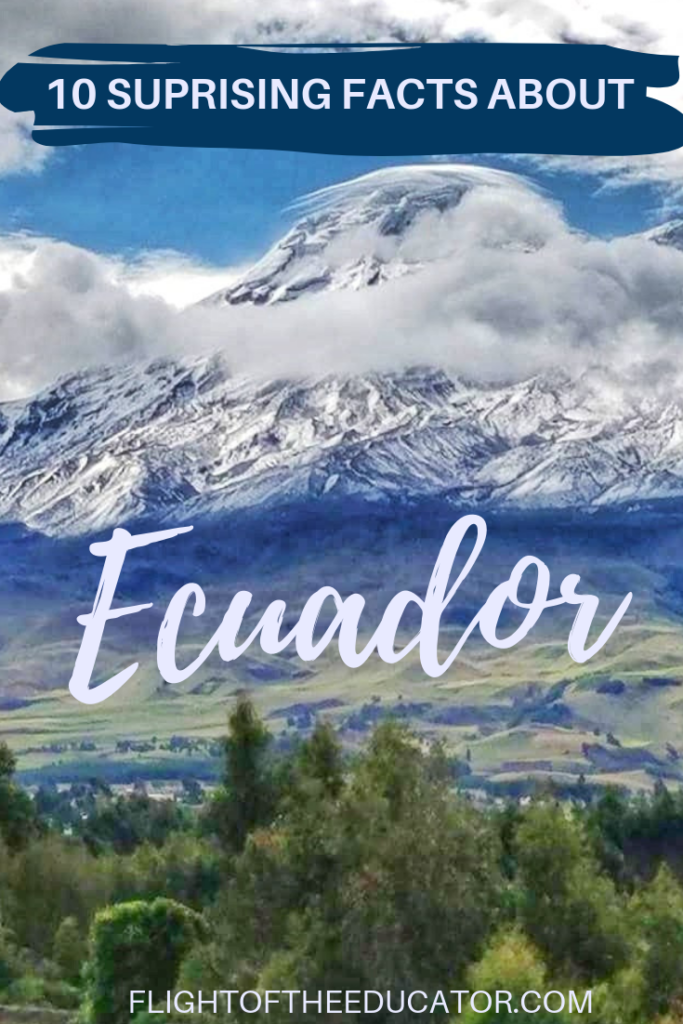 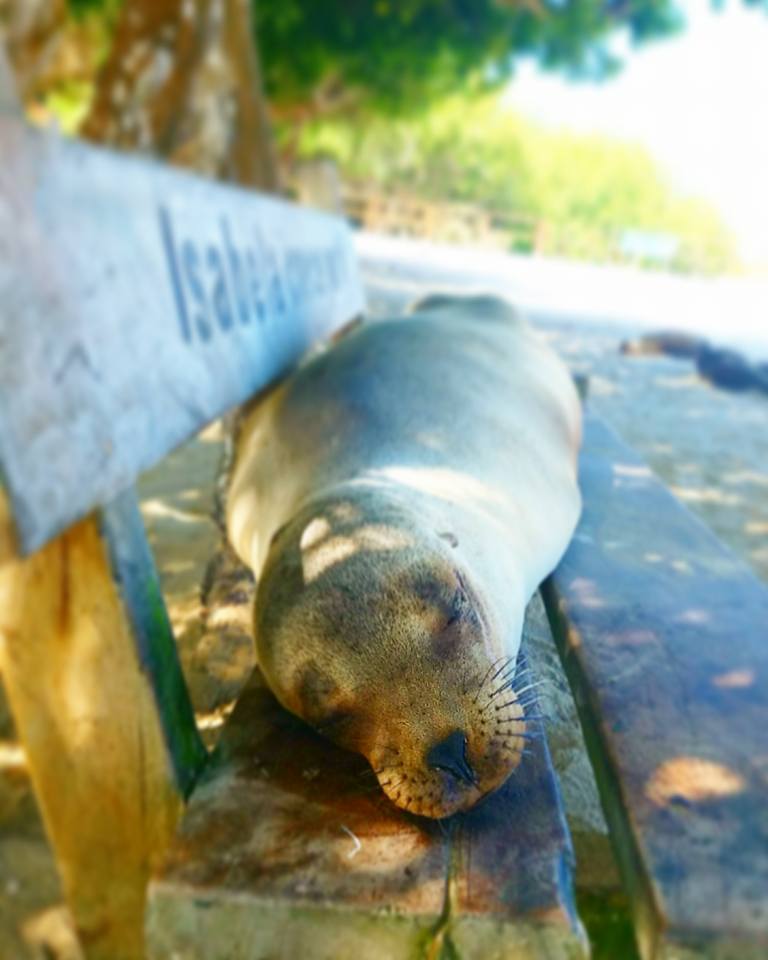 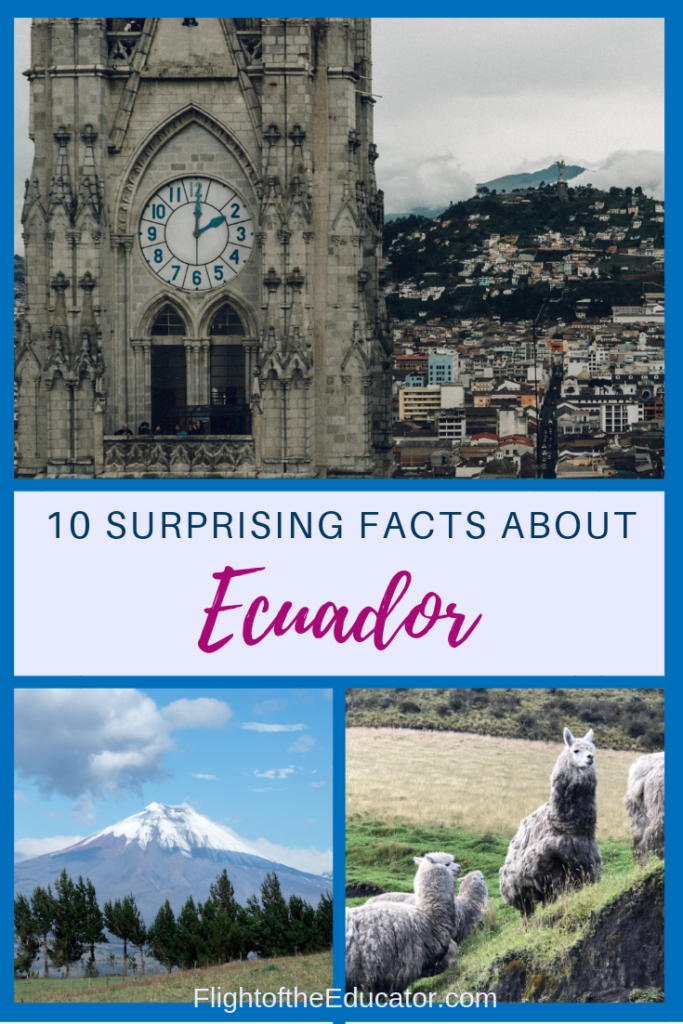 What I should have known before going to the Australia Zoo

I loved Ecuador! Such a beautiful country!

It really is! I couldn’t believe those mountains!

Those are some interesting facts! I’ve never been there, but would love to go, especially after reading more about it.

Very interesting, great photos and Galapagos Islands is on my travel plans, so thank you for sharing

I do hope you enjoy it! The history of it is fascinating!

I love this, it had me chuckling more than once. Not that it was probably supposed to be funny…but because I so get it! The Andes are intense for sure!!! I have my bets that you would have enjoyed the Antisana region of the Andes more than the Galapagos. Although I haven’t been to the islands myself. The Equator stuff is fun though, isn’t it? Our family moved to Ecuador almost 9 months ago, we are loving life here!

My mind is still blown by the Andes. I try to really impress on people the difference, so I had to make a graph. I bet living there is wonderful!! You should get out to the islands though! They were different than I imagined, and besides running into a cactus, it was really great!

Lotza fun factoids I did not know.

They were all a surprise to me as well!

They say you haven’t lived until you’ve eaten guinea pig. Well, ok no one says that but, you’ve definitely done some living!

Ha! Maybe ~they~ should start saying it!