Top Posts
8 Travel Hacks to Save Money on Flights...
How to Get Paid Market Research Studies and...
10 Things No One Tells You About Iceland!
22 Things to do in Peru besides Machu...
Israel Budget ~ How Much Does a Trip...
Iceland Budget
14 Reasons to Road Trip to Florence Alabama
My Cuba Budget
The 7 Best Bars in Barcelona to Have...
24+ Best Places to Visit in China Besides...
Home TripsAround Atlanta Team Feud Night! New Game Night in Atlanta!

This post is part of the series Around Atlanta

Other posts in this series:

I love a good game night, and when I’m not off traipsing around the world, I have to keep myself occupied here at home in good ol’ Atlanta and find fun things to do in Atlanta.  Naturally my traveling, while cheap, isn’t free, so I do need to still find ways to be entertained while keeping my budget in mind.  I usually get into Trivia, but I’m so excited that they’ve finally *officially* added Team Feud!!  (Keep reading for a contest at the bottom!)

I happened upon this as a pleasant mistake!  I went to get Chinese on a Monday, and it was closed, so I decided to hit up .45 cent wings at TJ’s.  It’s right up the street from my house, and I do love wings and a good deal.  Just as I was about to pay and leave… I heard my longtime buddy, Yeager, announce that it was Team Feud night!!  So I started looking around like….

This is not a drill!  I immediately called my bestie and partner in crime, (you might remember her from when we drove a tank!) Jill.  We’d previously attended (two years ago, c’mon guys) a cursory Beta Event for Team Feud and had been forgetting that it existed and were excited to play! 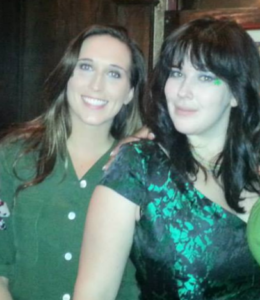 We ended up getting 2nd after we dropped from first, which ain’t too shabby!!  It’s now a weekly Monday event, so you know I’ll be there more often to spend our winnings!

So if you want to have a super amount of fun, for free, and possibly win money… you should check out Team Feud! It’s currently only at 2 locations as of March 2017. 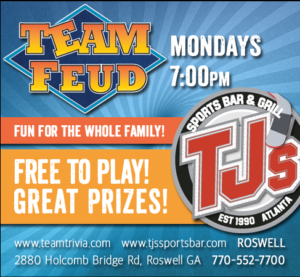 If you want to take on the champs and live around Alpharetta (Exit 7 on 400).

It takes places at TJ’s Sportsbar and Grill in Alpharetta. They have some sweet specials pretty much every night and also host Trivia, Poker and Bingo. I recommend the Honey BBQ wings.  Yum.   And if you’ve never used Groupon, you’re missing out.  If you sign up through my link, I get a referral bonus, which I’d appreciate since I’m not paid for this site.  If you already have an account, here’s the link to the groupon for 35% off! 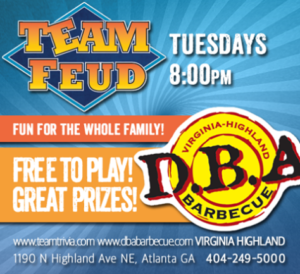 For you ITP people

I don’t know much about DBA BBQ because I’m admittedly an OTP girl (don’t judge me, it’s cheaper!)

But Wait! That’s Not All!

According to their Facebook page (which you should like to get more fresh and exciting news),  they are giving away ~for a limited time~ free tickets to the Renaissance Festival to winners at their trivia show! 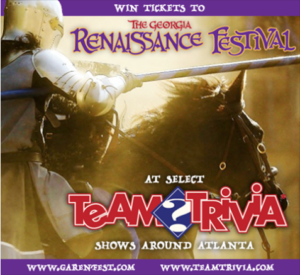 Or How about a contest?

If you don’t think you can win them at trivia, win them with me!  Go to My Facebook Page’s Giveaway to Enter! You have a few ways to enter to increase your chances of Winning!  Good Luck!

Come join me and/or say Hello to me or Yeager!  He’s there all the time.  Me, only sometimes 🙂

You’re so interesting! I do not suppose I’ve read through something like that before.

So great to find someone with a few original thoughts on this topic.
Really.. many thanks for starting this up.
This website is one thing that is required on the internet,
someone with a little originality!

Thanks! I try to be different! 🙂

Holler if you go on Monday Im down

Totally, I’ll be there!