Top Posts
How to Get Paid Market Research Studies and...
8 Travel Hacks to Save Money on Flights...
22 Things to do in Peru besides Machu...
10 Things No One Tells You About Iceland!
Israel Budget ~ How Much Does a Trip...
14 Reasons to Road Trip to Florence Alabama
24+ Best Places to Visit in China Besides...
Iceland Budget
My Argentina Budget!
My Cuba Budget
Home Budgets New Orleans Trip Cost

A common travel goal is to visit all 50 states, so I had to get down to NOLA to check off Louisiana!  I found a Penny Fare with Spirit and had a quick weekend getaway in New Orleans. This is my New Orleans trip cost to better assist you in planning your own New Orleans trip! 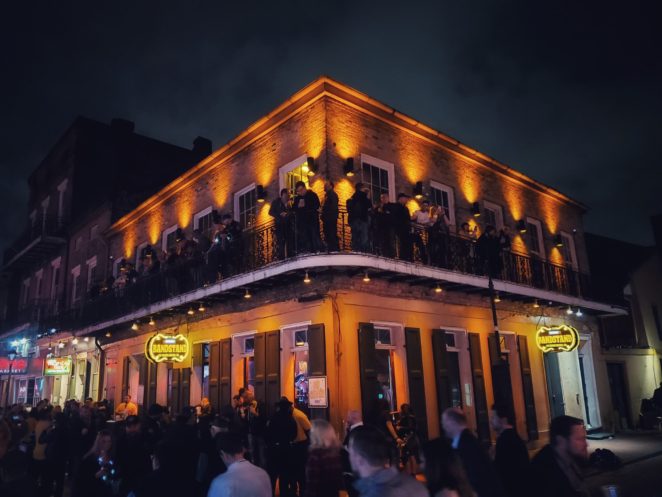 Could you do it cheaper?  You certainly don’t have to give to the street performers.

Keep in mind: This was a quick getaway, so not time for much!  If you’re around a little longer, you might want to check out the best things to do in New Orleans.

I only had a brief weekend to take advantage of New Orleans, but the top thing I wanted to do was a New Orleans Ghost Tour.  I decided to go with Haunted History Tours because they have been featured on many TV shows as the best one in New Orleans. And why not go with the best?

It was really difficult to pick a tour! They have some geared more towards Voodoo, Ghosts, Vampires, Cemetery, and even a Haunted Pub Crawl!  In the end, I opted for the original Haunted History Tour since the time worked the best for me, and I thought I should start with the original!

Take a peek of their full listing of tours here. 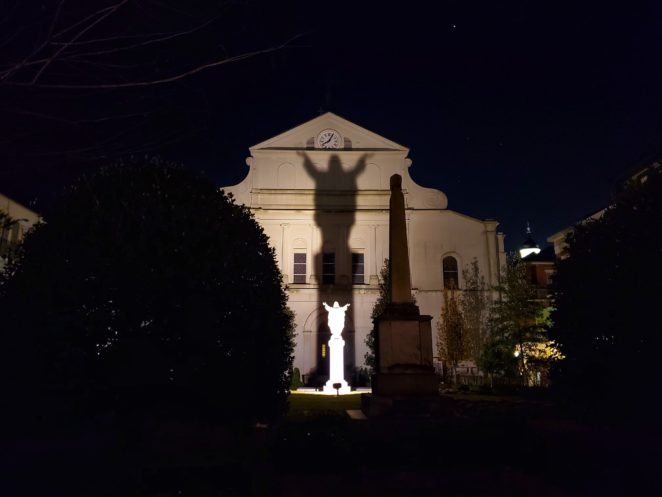 I noticed that all the tours started around similar times and from the same general area, so I was worried that it was going to be a hot mess, but it was handled SO well.  The meeting point was right in the thick of the French Quarter, so it was easy to find.  Everyone was told to stand in front of different stores depending on the tour you are going on. You’re actually able to do the tour with a drink in hand (as long as you’re not aggressively intoxicated), so it was easy to grab one of the fun themed drinks in a fun glass and head out on the tour!

Our tour guide was very fun and knowledgeable.  She had a good walking pace, a clear voice to listen to, and just the right amount of drama that a ghost tour deserves! She also got us out on time, gave a ton of info, answered all questions and most importantly!….. Found us a bathroom break and a drink break at a haunted bar.  #WINNING Can definitely recommend it. 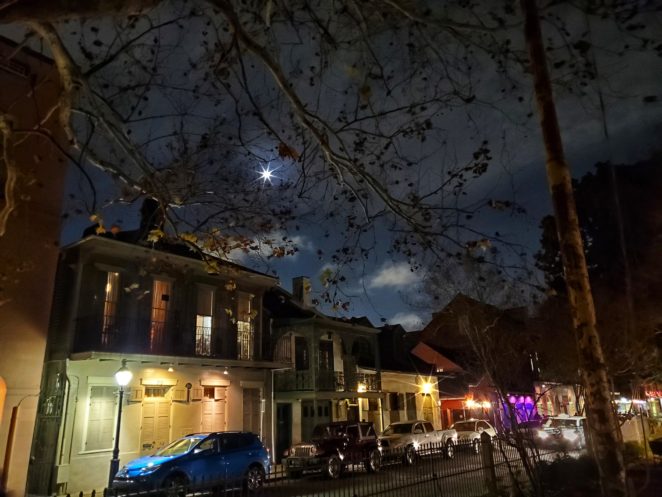 This activity was really a “for the story” experience.  I saw several women set up on the streets with tables, candles, draperies and tarot cards.  So, I thought… why not! I opted to do both for $20, which I felt was fair.

I’m not sure if my woman was a real psychic, but she definitely “kept it real” with the way she talked to and about me, lol.  I felt like a few things she said were generally applicable, but some seemed pretty specific. One or 2 cards surprised me, so I guess we’ll have to see if that plays out! 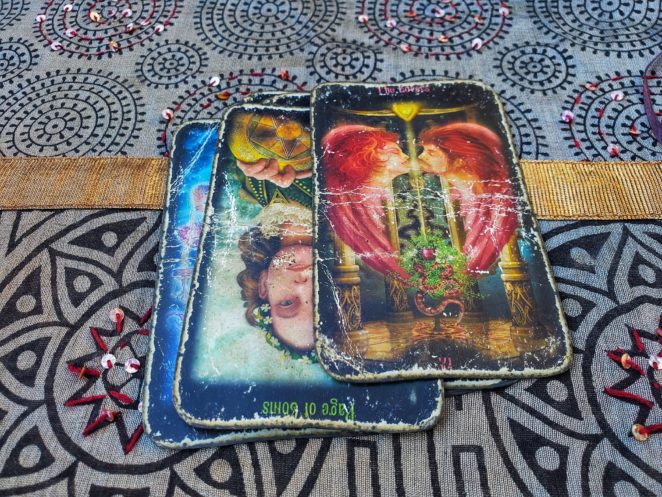 “The Lovers” huh? We’ll have to see how that shakes out hehe

You certainly don’t have to pay the street performers, but I figured if they were good enough to make me laugh and sit and watch them for a while, they deserved a few bucks.  I actually saw pretty much the same act in front of St. Louis’s Cathedral and across the park near Cafe du Monde.

I recommend going to the one by Cafe du Monde.  They say they are there pretty much all the time. Plus, as a bonus, you can get a beignet at Cafe du Monde and have a snack and a show! 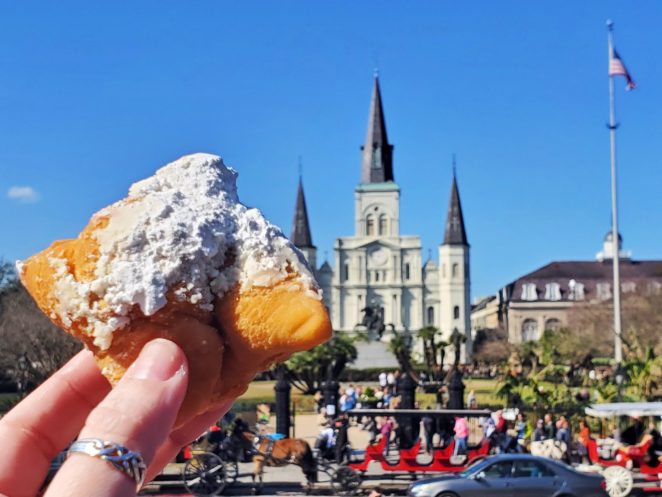 Could you do it cheaper? Yes, there were cheaper places, but when I factored in travel time and ubers to get where I wanted… rather be walking distance!

Keep in mind: You want to be near the French Quarter! 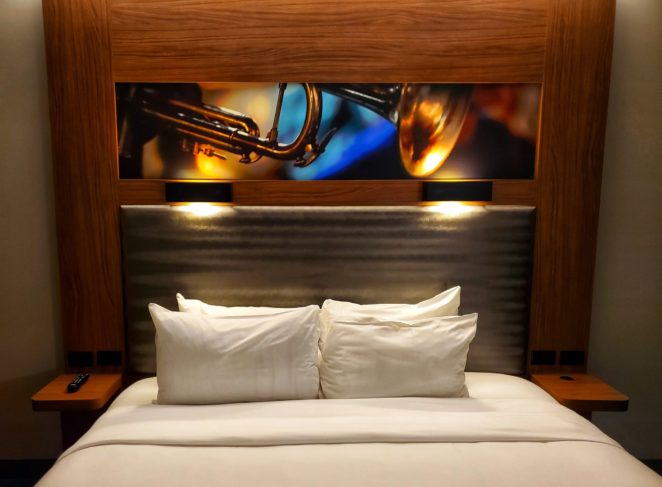 I think my hotel cost was a little more because it was “Mardi Gras Season,” but it was well worth it.  The hotel room was very comfortable, the hotel was within walking distance to the French Quarter, and they had games and happy hour in the lobby!  Looks like the price is usually about $120 a night plus taxes.

Here are my suggestions for accommodations in New Orleans  if you want more options: 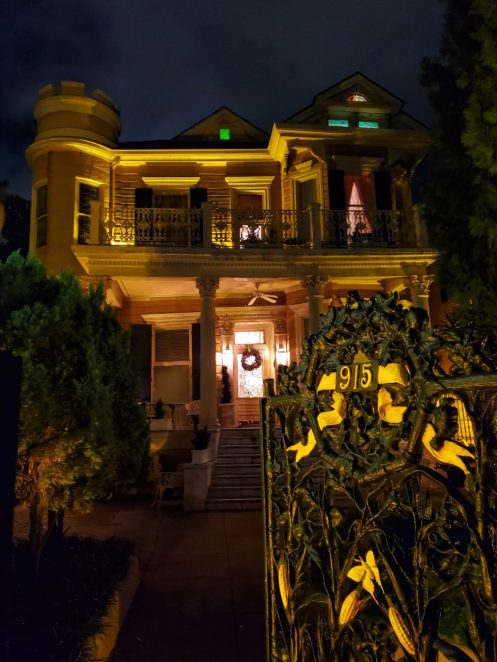 Could you do it cheaper? Could take the bus Round Trip both ways to the airport.

Keep in mind:  My flight was really early on Sunday morning!

To and From Airport

When I landed, I immediately checked the uber price to the hotel. $68??? No, thank you! So I hopped on Google and asked around, and it turns out there was a bus that goes to the city (turned out to be only $1.25!)  To get to the bus, go to level 3 outside of the airport and look for the 202 Airport Express.

The end of the line is Duncan Plaza.  I would search that to your hotel to see where to get off.  If you do Aloft like I did or somewhere close by, it’s a very short walk from Duncan Plaza. The bus is slightly longer than cab/uber, but for that amount of savings, alrighty!  Took less than an hour.

Once I was in the city, the uber prices weren’t terrible.  There are also these little bicycle taxis, but those would have been more expensive.  After a long day of walking, I didn’t feel like walking back to the hotel on a boring street, so uber from the ferry terminal to the hotel it was!

I had heard that the best view of the city was from Algiers! I took the ferry (it was $4 round trip.  They don’t have change, so make sure you have some singles!) When I got off the ferry, I was surprised that there was a free music festival pretty much right there!   Can’t guarantee that’s always there, but it was nice to listen to the music, eat some fried ribs, and see the skyline.

Oh, and a silly place for a photoshoot ahahaha. 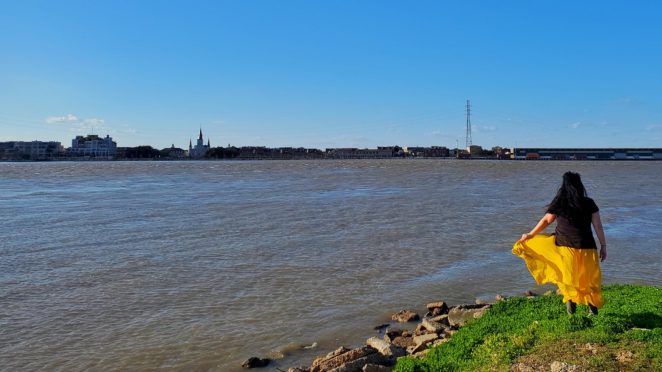 Could you do it cheaper? Don’t eat in the French Quarter, but then again… isn’t that the point?

Keep in mind:  I was only there one full day and part of another.

What, like I’m going to go to Nola and *not* try Gator Poppers?  They were pretty good, and came with a spicy sauce.  I got it at the place on Bourbon street with the barber chair shots and Resurrection.

The Cajun Brekky was at this restaurant right at the corner and very close to St. Louis Cathedral.  This was more of a brunch, so I didn’t have lunch for the rest of the day. It really hit the spot, but careful of the cajun seasoning if you’re not into that! 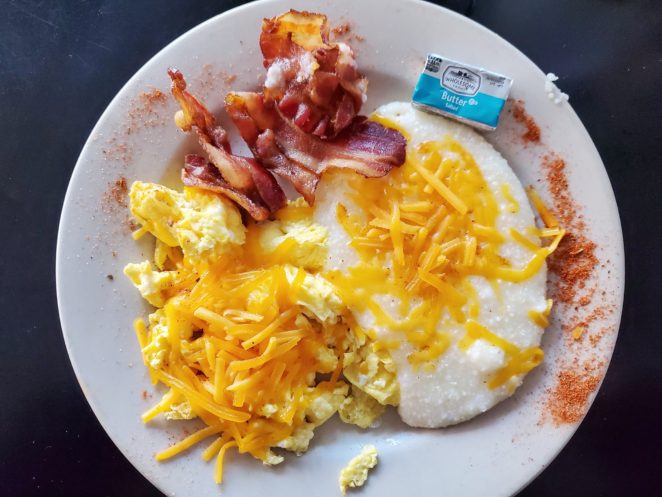 Broussard’s is a super fancy restaurant that was celebrating 100 years in business! That seems like a place worth visiting!  What I really liked is that they had a drink menu that had the most popular cocktail for every decade for the last century! Very cool! I got the filet which was *perfect*. Definitely a little pricier than other restaurants, but not unreasonable and very good.  I got the filet and my friend got scallops, so we made our own surf and turf! 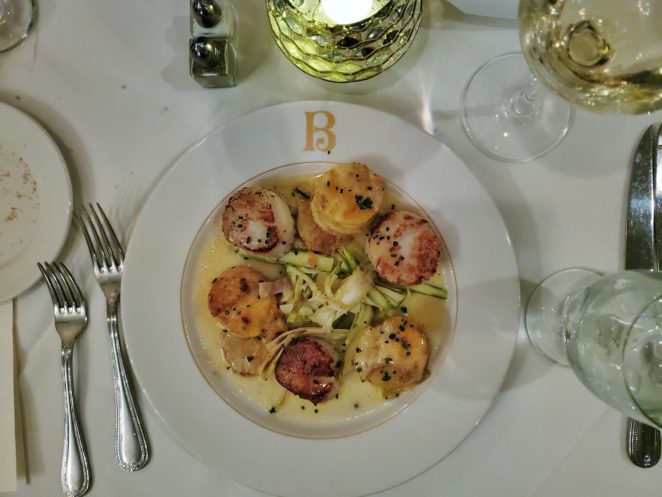 I mean, have you even been to New Orleans if you don’t get a Beignet?  I saw signs for them all over the city, but the place to go is Cafe du Monde. The line actually went out the door, but it moved pretty quickly. The line actually winds through the restaurant and then back out to the back again, so I would go ahead and just walk with the restaurant to your left straight to the back. 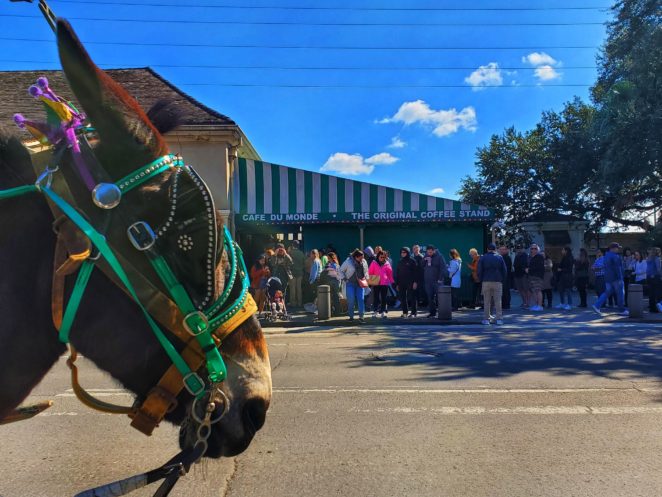 PRO TIP:  You can also buy Cafe du Monde’s beignets at the airport!

What’s nice is that they don’t wildly overcharge, which they totally could!  Grab them to go, walk up the ramp behind the cafe and go look at the Mississippi River or the street performers that are hopefully performing in the amphitheater!

The Fried Ribs were just by a street vendor.  Not bad! It was a little cheaper because they sadly ran out of Mac and Cheese D:

For alcohol, I’m not going to mention how much I had to drink in total, but I will tell you how much everything costs, so you can figure out how to apply it to yourself ?

I can’t really talk about ALL the fun drinks that Bourbon Street has to offer, but suffice to say that pretty much every bar has a signature drink in a fun souvenir glass!  I do want to talk about a few that left a real giggle in my heart.

Shark Attack can be purchased at Tropical Isle (there are a few locations. Can’t miss them!).  I think it was like a vodka sour and then a shark “attacks” the drink. I could describe it or show you a picture, but instead… here’s a video!

Hurricane is a must-have in New Orleans, and the best one is at Pat O’Brien’s! Not only is it HUGE and cheap, there is also a stunning courtyard to enjoy it.  The rest of Bourbon street can get a bit rowdy, so it’s a nice little enclave. 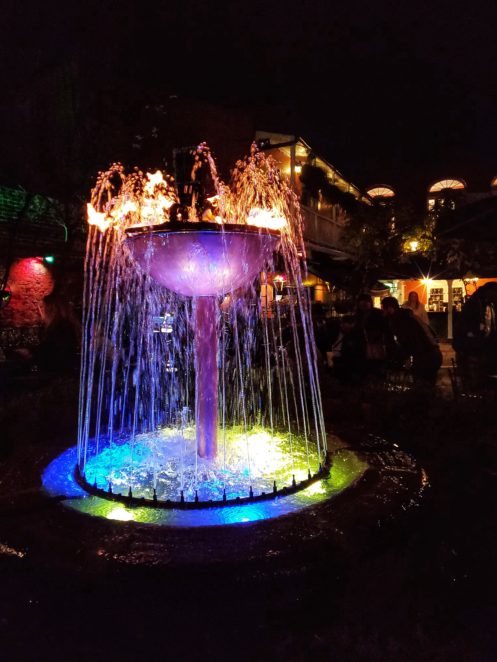 The Resurrection was a sweet blue… I’m not sure, but it was tasty and a fun mug!  Spirits on Bourbon is also where you can sit in a barber chair and be aggressively fed shots if you’re into that.  And they had dueling pianos! It was a fun spot.

For Slushies, there are multiple spots up and down the street with slushies like Fat Tuesday and Slush.

Could you do it cheaper? Stores aren’t really haggling places.

Keep in mind: There are TONS of souvenirs.

I collect spoons, and I don’t normally get one for the states that I go to, but this one had a cute little gator charm hanging on it, so I had to.

For the Voodoo doll, I was actually searching for a “create your own voodoo doll” that I had read about, but apparently they don’t do that anymore.  So, I had to just get a silly little pre-made one. There were more *intense* ones at a store called Hex, but I got a touristy one. Oddly enough, it was so touristy that I saw the same dolls at the Tampa Airport that I went to the week after. Weird right?

I don’t normally include flights since they always vary from where you come from, but I got a penny flight from Spirit!  My flight from Atlanta was only 20 CENTS plus tax, and then a reduced fare on the way back, so $75 round trip. Stay tuned for an article just about that!

So, how much does a New Orleans trip cost?

I hope you find this helpful for your New Orleans trip cost breakdown! Let me know what prices you paid and where! 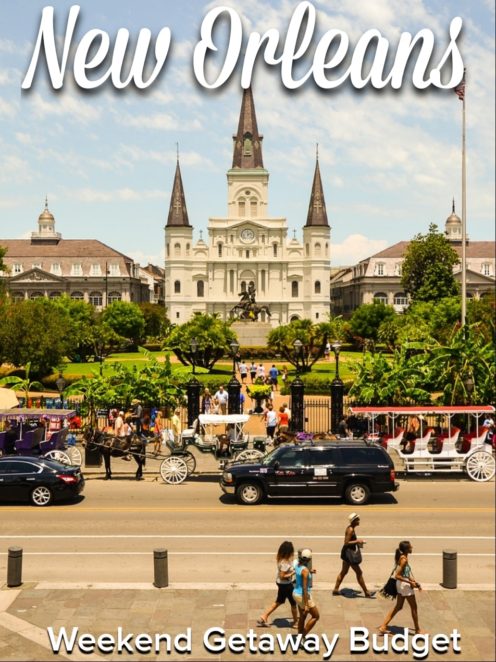 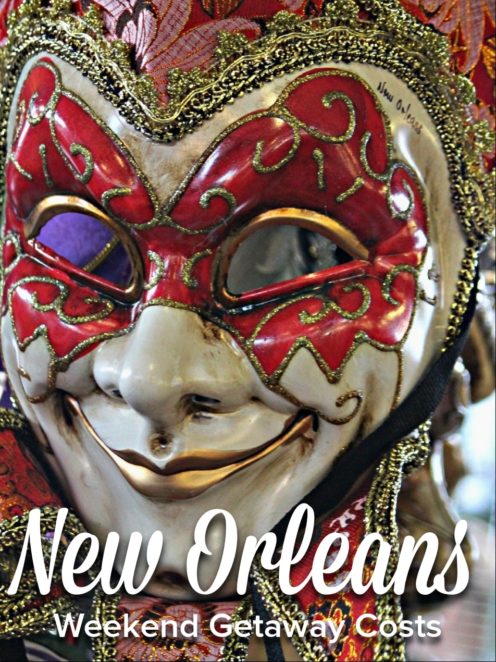 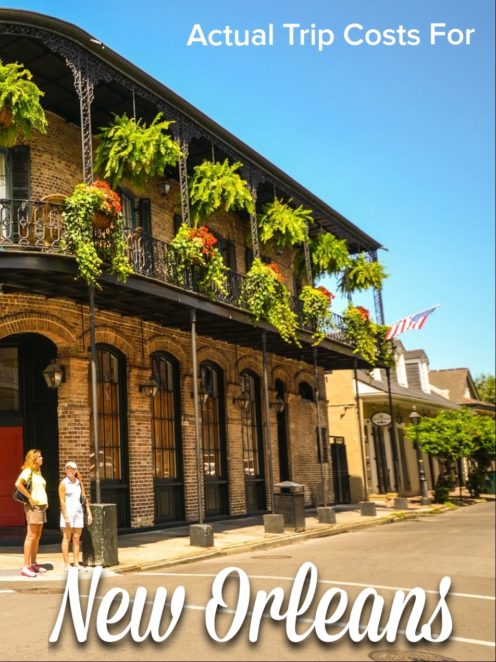 Antarctica Camping ~ What To Expect