Top Posts
8 Travel Hacks to Save Money on Flights...
How to Get Paid Market Research Studies and...
10 Things No One Tells You About Iceland!
Iceland Budget
22 Things to do in Peru besides Machu...
Israel Budget ~ How Much Does a Trip...
The 7 Best Bars in Barcelona to Have...
14 Reasons to Road Trip to Florence Alabama
My Cuba Budget
24+ Best Places to Visit in China Besides...
Home TripsAsia Mongolia Budget!

My Trans-Mongolian Tour began in Beijing, so this Mongolia budget includes my purchases after the trip started while in Mongolia. You can also see the Trans-Mongolian budget as a whole if that’s what you’re into, or just check out what stuff costs for your own separate trip in China or Russia as well! Keep in mind: These prices were included in my tour

Could you do it cheaper?  Hostels are always cheaper! The room was included in the tour price, but we stayed at the Flower hotel which was about $65 a night.  It had a gorgeous lobby but no air conditioning.  I was there in the summer, and it honestly wasn’t bad (temperature wise).  The hotel had a lot of fun things including a karaoke bar and massage spa! Our second night, we stayed at a delightful ger camp. The ger (or yurt as you’ve probably also heard it called) was much bigger than I anticipated, and actually had power (no wifi or AC though, so calm down).  Even though it was ~quite~ warm during the day, it was actually quite chilly at night! I slept on top of the blanket that they provided to try and make my bed marginally softer, and my own blanket on top. I ended up being too chilly in the night; I needed to get under both blankets… and that was in June! We stayed at the Guru Eco Complex Camp in the Terelj National Park and very close to Princess Temple.

I was with my tour group during my time in Mongolia, but you’re absolutely able to do Terelj National Park without a guide. 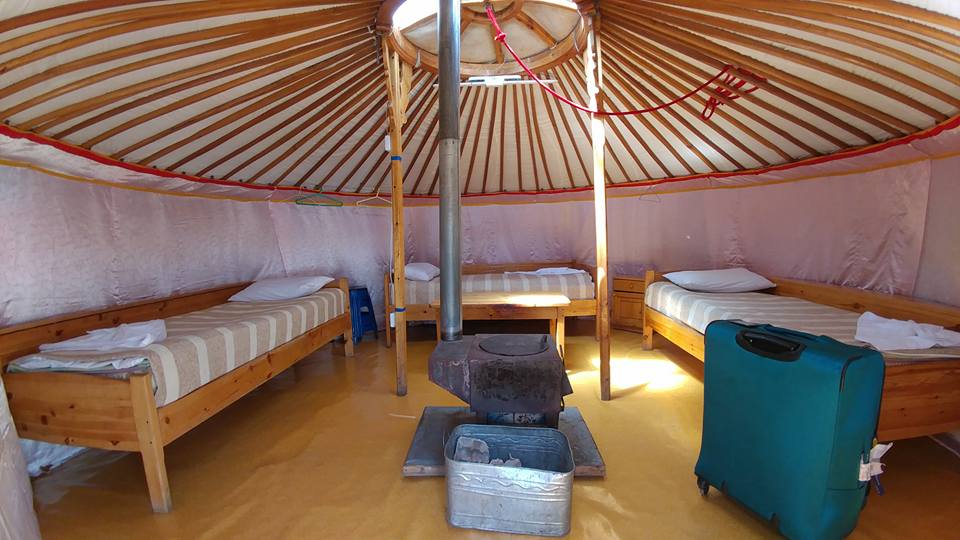 Keep in mind: Taxis are super cheap, but I don’t know how much a driver would be if it wasn’t included.

Could you do it cheaper? If you want to walk it, but ugh.  Taxis are super cheap. Since I was on a tour, we had a driver to drive us all around.  It only cost us those $8 on the last day because he was only booked to take us to the train.  We paid a little extra, and we had him for the whole day!

We opted for this extra because we wanted to go to this really cool cashmere factory!  We actually got to walk around behind the scenes, see how they made the yarn, dyed, and wove them into the beautiful creations! There was, of course, a gift shop!  Mongolia is apparently famous for cashmere, and the best thing for this Mongolia Budget was that this experience was free! Our local guide told us that any car in Ulaanbaatar could be a taxi.  You hold out your hand, and if the driver feels like stopping, they will! It’s less than a dollar a km!  It’s basically Uber before they officially get Uber.

Keep in mind: Breakfasts were included with the accommodations! And I also brought a fair bit of food with me.  Ramen noodles, gummy snacks, and some chocolate pandas.

Could you do it cheaper?  Cooking for yourself in the hotel room.  But at these prices, why not eat out! Most of the food budget was for food on the train, and the ger camp came included with breakfast.  The first dinner was an amazing steak at a pretty fancy restaurant for $11?! You definitely could not get this kind of quality steak in the US for that price!  It was almost as good as the steak I got in Argentina! The last meal we had was at a legit Mongolian buffet, and even that wasn’t even $11 too. And they prepared the food with swords!  So if you were wondering what to eat in Mongolia… this is definitely the place!  You get to choose your protein, sauces, and sides, and these sword fellows chop/slide/mix/grill your food altogether!

The proteins are the usual beef, chicken, eggs, but you could also get horse if you’re brave!  I always like to try the “different” local flavors in countries.  Horse was a lot better than the tarantula I had in Cambodia and the guinea pig in Ecuador! On the train, the prices were crazy expensive (which was a surprise!), so I mostly ate the Ramen noodles that I brought with me from home and some other snacks.  I bought some other foods from a grocery store to stock up for the 2 nights on the train to Irkutsk.

Keep in mind:  I didn’t really buy anything.

Could you do it cheaper? I feel this one is obvious… After we crossed the border from China to Mongolia, the price of the beers on the train doubled, and then the train from Ulaanbaatar to Russia didn’t even have a dining car to buy anything anyway.  So the only beers we had were at dinner and karaoke!

Keep in mind:  That massage was at my hotel. Yessssss.

Could you do it cheaper? I feel this one is obvious…but honestly, I wouldn’t skimp on the Dancing Performance.  That was really something. Most of the activities were included in the tour, but the big one that wasn’t was the Singing and Dancing performance.  It lasted a little over an hour, but you need to get there early because they PACK that house. I’m serious. PACKED. You’ll see throat ululations, dancing, traditional instruments, and gorgeous costumes.  I didn’t take any pics because I didn’t want to pay the extra amount (I didn’t think they’d turn out in low light, and I wanted to experience it myself instead of hunting for the best pic), so here’s a pic of me in the traditional outfit. 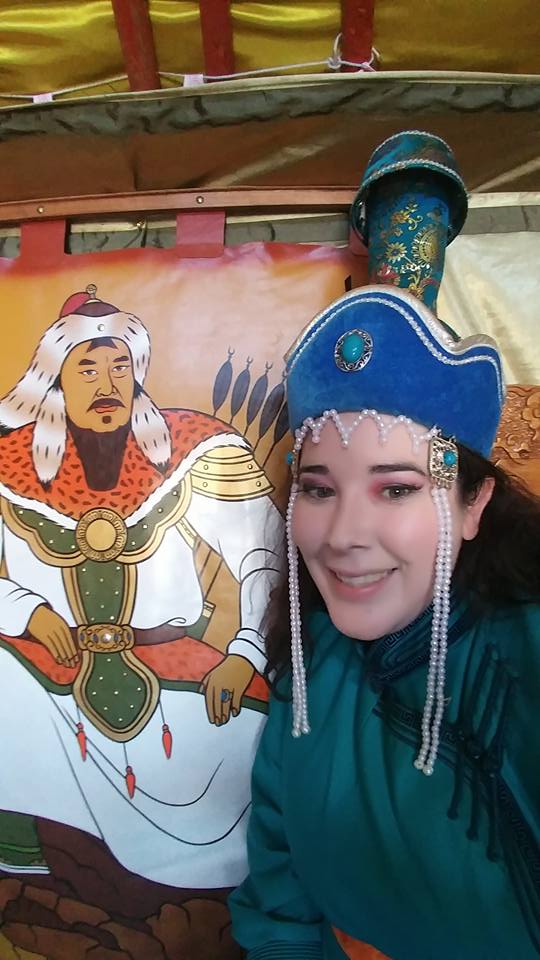 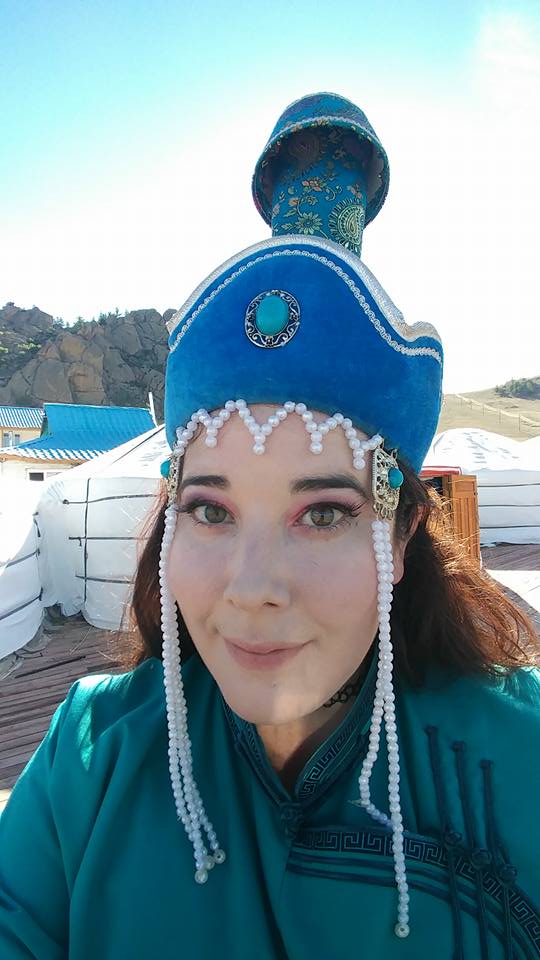 We also went horseback riding which was kind of sad because the Mongolia horses were so short and skinny.  The Mongolians don’t seem to be particularly tall, so I guess the horses didn’t need to be either.  Usually, horses’ shoulders go to about my head, but these came to my chest! It was still a nice way to see the countryside and all the wild marmots <3 Speaking of Mongolia horses, we also saw a GIANT one being ridden by Genghis Khan!  It was built in his honor (EVERYthing is built or named in his honor!) on top of a hill.  You have to pay to get in, but inside is a really well-done museum of artifacts, a video, and you can go up to the top of the horse head (elevator for part of the way!). 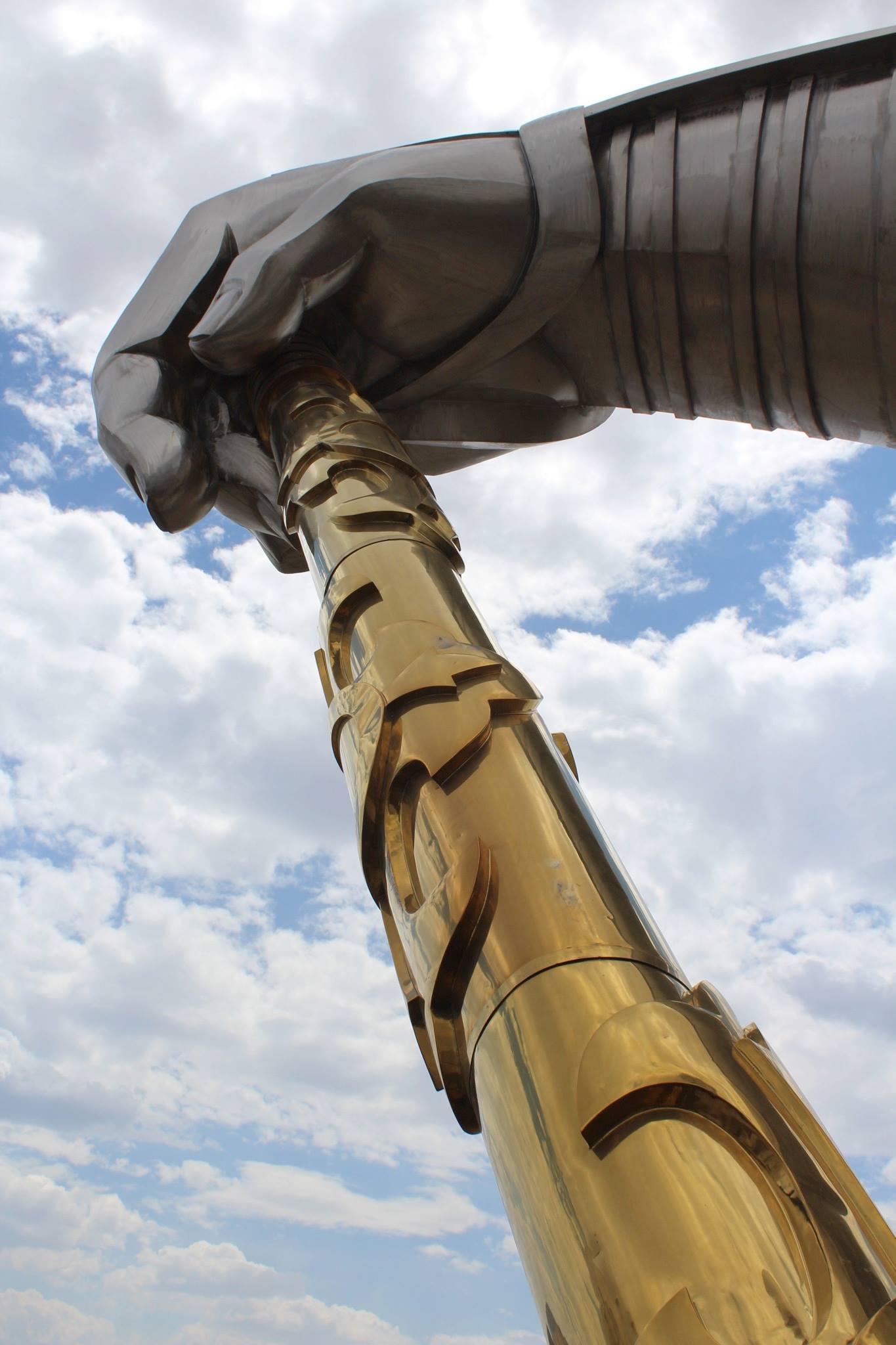 After coming down from the statue, there are men with vultures and eagles.  For a small fee, you can pose with them (it includes a free pic printout!). That vulture was hella heavy. So pumped to find a spoon in Mongolia! I guess I didn’t look hard enough to find one in China.

But the really cool thing that I got was this ankle bone game.  You roll these 4 ankle bones, and based on the side the is displayed “the shape” and the number determines the fortune.  I asked it about a big question in my life and got “The Best” as a response, so I choose to believe in its powers. 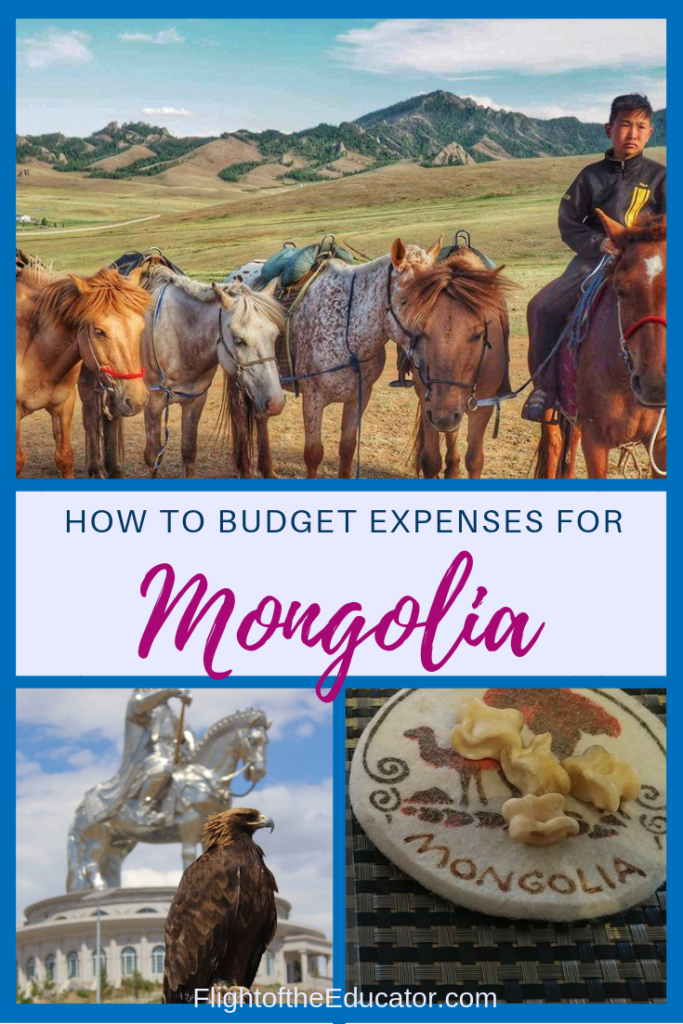