Top Posts
8 Travel Hacks to Save Money on Flights...
How to Get Paid Market Research Studies and...
10 Things No One Tells You About Iceland!
Iceland Budget
22 Things to do in Peru besides Machu...
Israel Budget ~ How Much Does a Trip...
The 7 Best Bars in Barcelona to Have...
14 Reasons to Road Trip to Florence Alabama
My Cuba Budget
24+ Best Places to Visit in China Besides...
Home TipsCompanies Review See the Isle of Mull Puffins on Boat Trips from Oban!

See the Isle of Mull Puffins on Boat Trips from Oban!

After I decided to go to Scotland, the next logical step was to decide where I wanted to go!  Since this was my second time going, I wanted to hit up all the places I’d heard about but didn’t see last time.  I had three goals: Loch Ness, Outlander, and Isle of Mull Puffins.

You heard me. PUFFINS!

Adorable tuxedo-ed puffins actually live in Scotland!  I started searching for how to get there and I was looking for Oban Boat trips, Boat trips from Oban, and Isle of Mull tours.  What really blew my mind during my research was that the Puffins were actually on the SAME TOUR as another tour I was looking for–Fingals Cave Tour!  Kismet!

Please keep reading to find out what to expect on one of the Oban boat trips!

What Will I See On One of the Boat Trips from Oban?

This will depend on which tour you sign up for.  Make sure you check all of your options! I chose the Early Bird Three Isles tour because I wanted to get back to Oban early enough to hit the road again.  I’ll talk more about your other options later, but this next part is for what I did!

These little fellas weren’t actually on Mull, but on Staffa! However, you can’t get there without going through the larger island of Mull.  When the boat drops you off on Staffa Island, you have two main activities. You can go to Fingals Cave on the left, or you can go to the puffins on the right. You can also budget your time and see both!

The hike to the puffins isn’t too bad. You do have to go up some steps and walk a little ways, but the biggest danger is stepping in water.  You get some really nice views of the island along the way. My favorite was seeing the curved basalt columns! I get so used to seeing them straight. 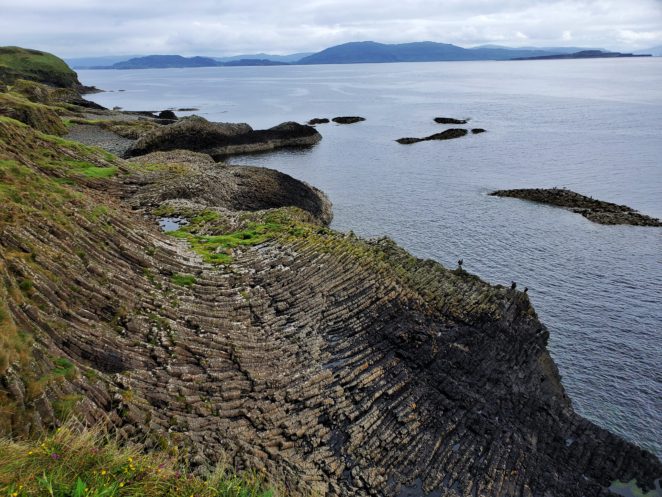 Once you get to the puffins, you’ll be surprised how close you can get to them!  The guide said that puffins don’t fear humans because humans can’t touch them.  And because people hang out around the burrows, natural predators keep away, so we’re actually helping them! 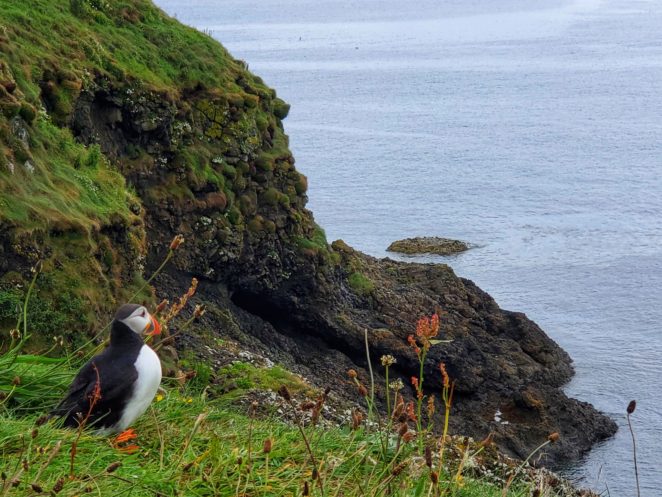 I was lucky enough to come when there were babies! I didn’t get to see them, but I did get to see the parents flying around and bringing home lots of small fish called sand eels! They would have so many in their beak!  To maximize your chances at a good pic, I suggest finding a spot and sitting there and waiting for a good photo opp. You can do video or burst shots. 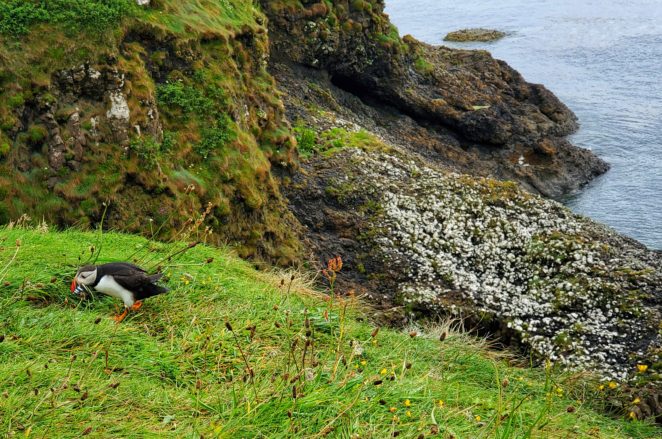 Look how many fish are in the beak!

Staffa Island is famous for the basalt columns.  I’ve seen some in Iceland and in Ireland. In fact, Staffa is the “other side” of the Giant’s Causeway!  While the puffins are on Staffa Island, it in itself is its own special destination. Pulling up on the boat was incredible.  We did a little lap, and it was awe-inspiring. I couldn’t wait to get out and see it. 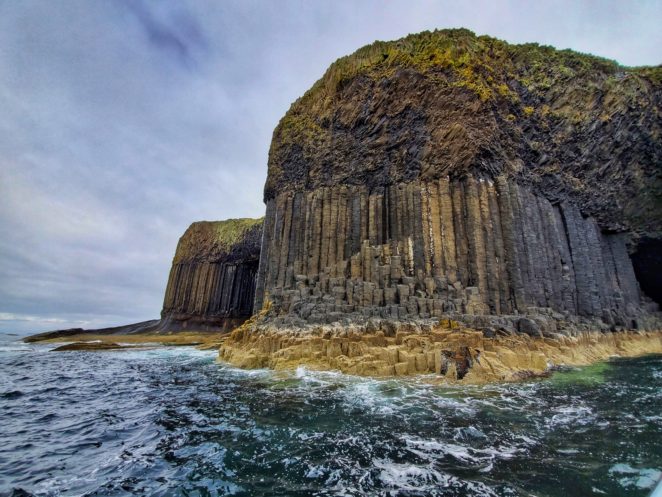 You don’t actually need a tour guide for the cave itself, but you do need a boat tour to get you over.  It’s mostly a level walk from where the boat docks to the cave, and there is a handrail to keep you steady.  Just make sure to wear good shoes! I would recommend seeing the cave first and quickly and then spending the rest of the time with the puffins. 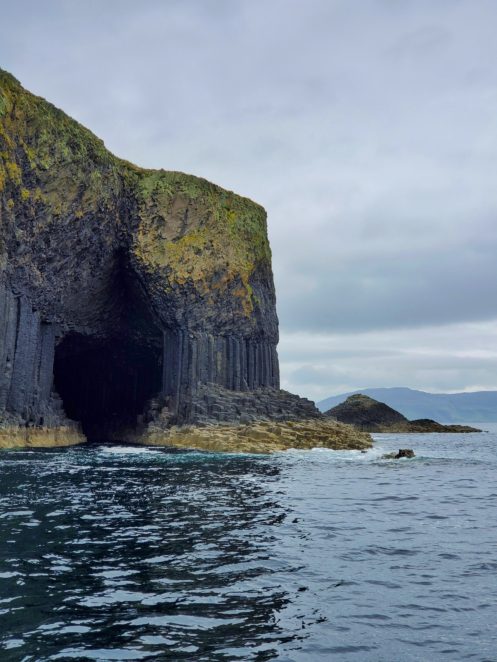 What mysteries lurk in there?

You do take the Mull to Iona ferry as part of this tour!  Because I was so excited about the puffins (pretty much the only reason I looked for Oban boat trips), I didn’t do much research into Iona, but it’s all part of the same Oban to Iona day trip.  When the ferry pulled up I was shocked by the color of the water. 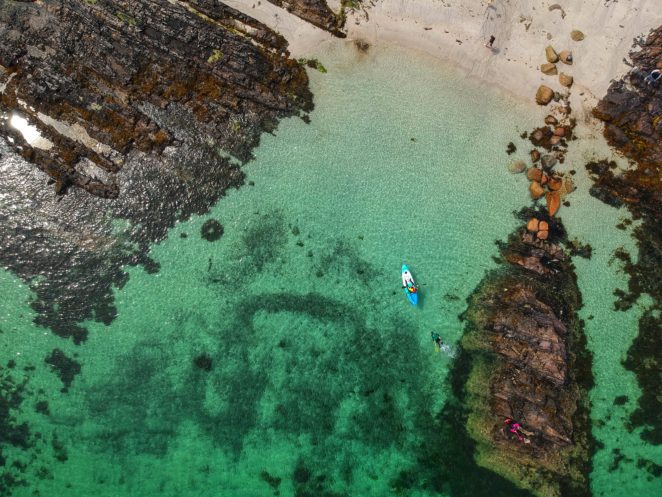 Looks so Caribbean to me!

After landing, I went off to explore Iona Abbey!  The abbey has an audio tour that is self-guided (my fave), so I was able to wander and learn about everything at my leisure.  I think the most impressive part of the abbey is definitely the cloisters. 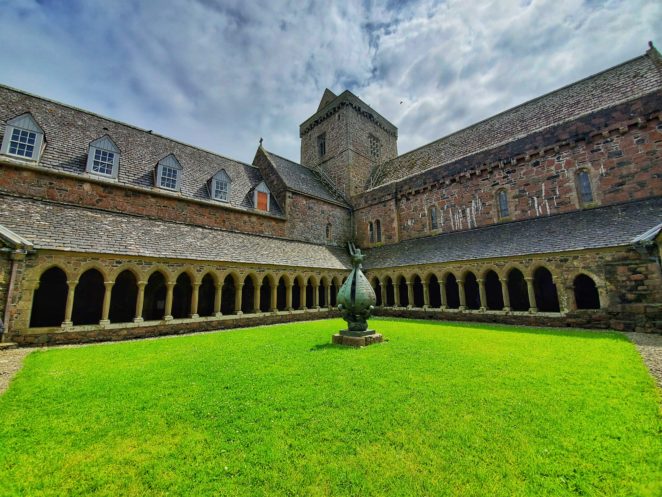 But bonus, there was also a coo!! 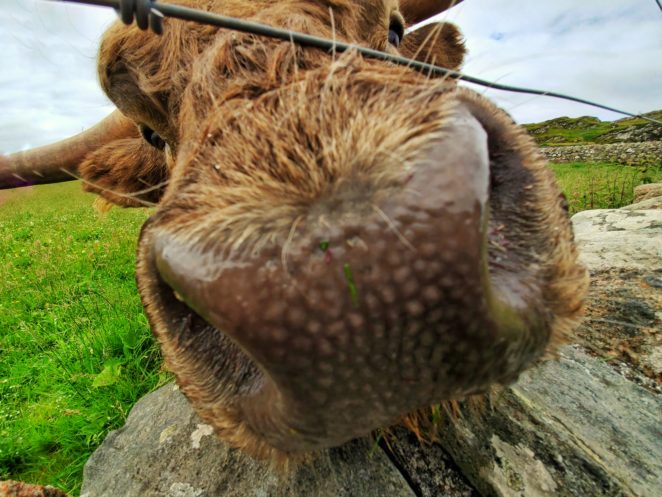 Also on the island are other ruins which are lovely to see, although they don’t have a guide.  If you’re lucky like me, you might be wandering around in it while a tour goes through and you can listen in 🙂 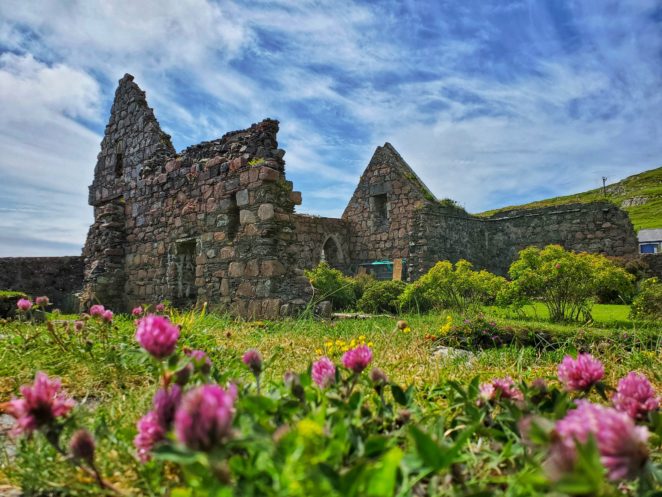 What Amenities Are Available on Boat Trips from Oban?

When you’re on the ferry from the mainland (I came from Oban), that’s a large scale ferry with wifi and other ammenties.  However, when you’re on the Mull to Iona ferry, there isn’t. It’s such a short ride anyway, that you really don’t need it. It’s like 10 minutes or something like that.  Once you’re on the boat that takes you from Iona to Staffa, there is also no wifi since it’s just a small boat.

I brought my own snacks and PBJ sandwiches to save money (that’s why my food budget was lower if you read my Scotland budget post!) and also because I wasn’t sure what the food situation was going to be like. And I don’t like being hungry!  However, on the main ferry, there is food and a whole cafeteria!. The short Mull to Iona ferry doesn’t have food. However, once you finish up on Staffa and head back to Iona, there are restaurants and places to eat. I was glad that I brought snacks though because it had been a long time since breakfast by the time I got to have lunch!

When you’re on the ferries, you don’t have a guide.  The times you have a guide are on the bus between ferry ports and on the small boat portion.  When you get to Mull, a bus will take you to the next leg of the trip. While on the bus, there are GPS triggered vignettes about Mull as you drive along.  Once you get on to the small boat that takes you from Iona to Staffa, you do have a guide. The guide will give you some fun facts as well as reminding you when to be back on the boat!

Yes to bathrooms!  Bathrooms were readily available throughout the day of varying comfort levels.  The most basic one was on the small boat, so I would recommend going on land before you get on the small boat.  There also isn’t a bathroom inside of the Iona Abbey, so if you need one, you have to walk across the street. So best to go before you get in 🙂

Where Do I Go?

If you’re in town the night before early enough, I recommend swinging by to pick up your tickets before you depart.  It will save you time and energy which you’ll be grateful for (especially if you have the early bird tour!). It depends on which company you buy from as to where you grab your tickets.

If you drove like me, you have a few options. The best option is to see if you can leave your car at your hotel.  Mine said no since I wasn’t staying another night, so I had to find parking. There is a parking lot right next to the ferry terminal, but that fills up quickly. I went eaaarrrrly, and I got the last spot.  There’s also a lot behind the Tesco station, and then it’s about a mile walk. Talk to your accommodations to see what they recommend. 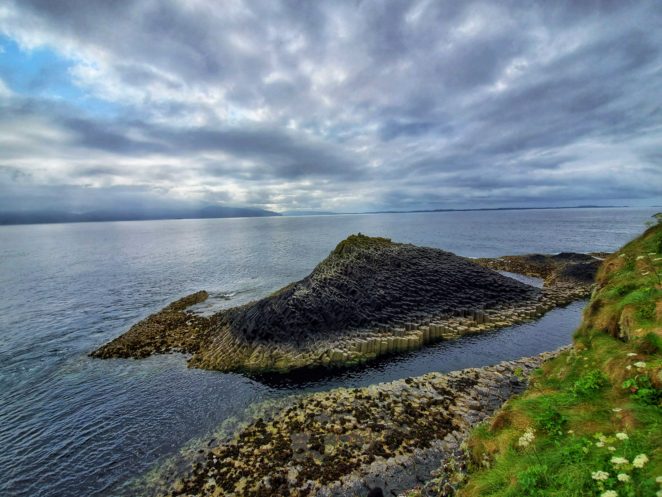 Definitely worth the parking hassle!

Other FAQ About An Oban to Iona Day Trip

When is the best time to see the puffins?

I went in July, so I was there when there were hatchlings that needed to bed fed! However, according to The Scotsman, the puffins are there late March to Mid-August

Can you really get that close to the puffins?

Yes!  The closest I was was about 3 feet to one. They seemed pretty indifferent to people! I found that just sitting and letting the birds come and go around me was the best way to see them rather than walking around and hoping to find one.  Just pick a spot and the birds will come and go!

Is it worth going even when it’s not “Puffin season”?

Oh absolutely yes!  Even though the puffins are so cute, the tour has so much else of substance too. Staffa Island is too beautiful and mysterious, and the Iona Isle has so much history to it. 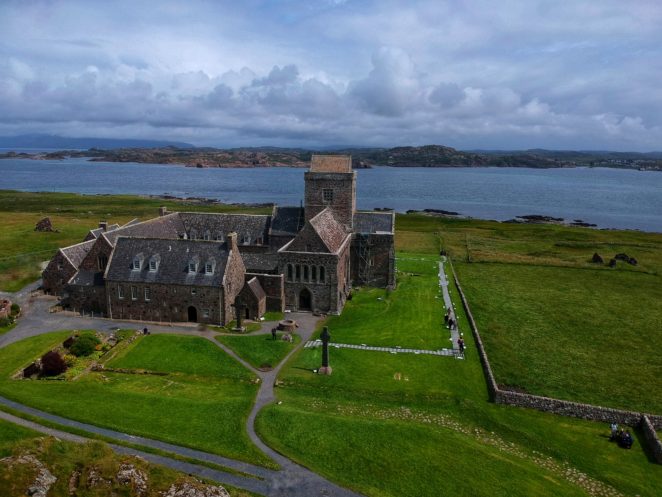 Are there other kinds of tours they offer?

Yes! For one, you can get two different versions of the tour that I went on because they have an early bird tour. Not only is it cheaper, but it got back earlier, so I was able to keep driving to my next destination. They have a few options for shorter and longer trips.  You can see those here.

Well, I took the tour from Oban since I had a rental car, but if you aren’t mobile yourself, you still have options! There are several Isle of Mull tours that leave from Glasgow and Edinburgh! They are over the course of a few days because you could see more!

Pin this to help everyone know about this awesome tour! 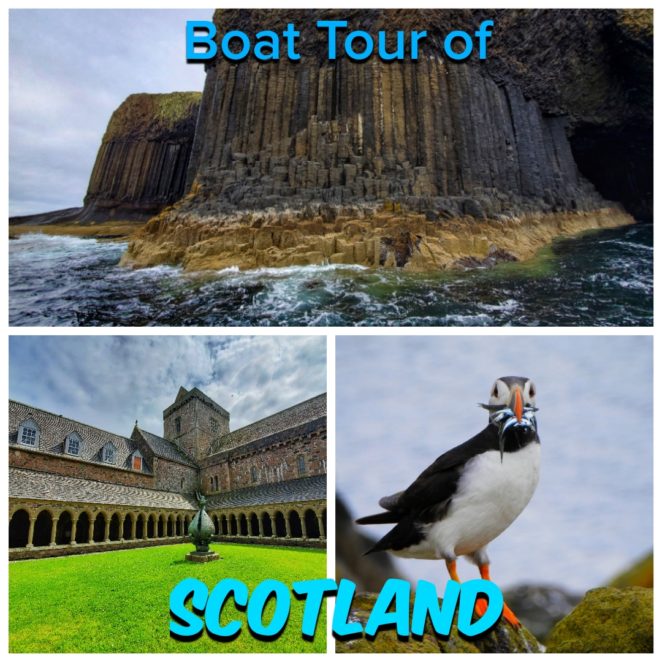 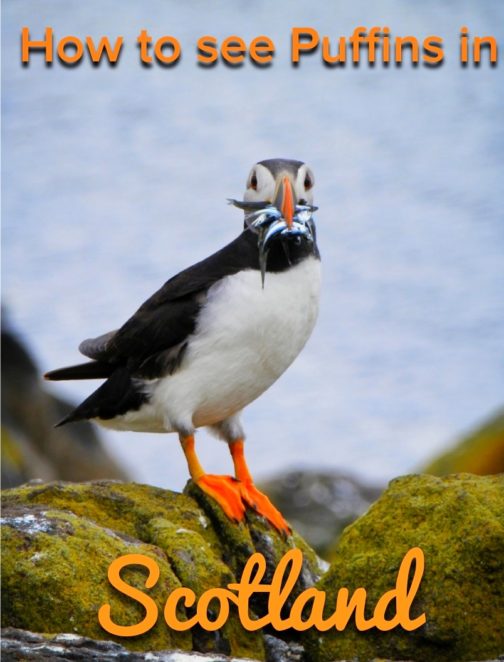 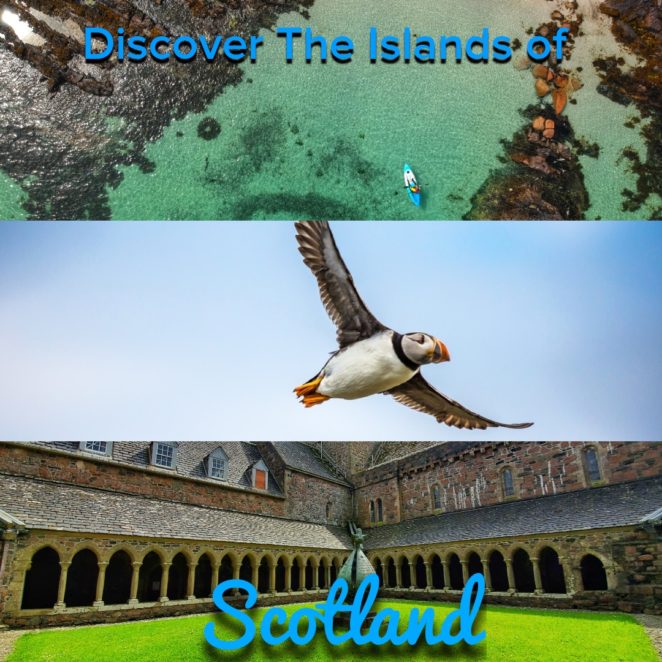 Is Scotland Expensive? My Actual Trip to Scotland Cost

7 Amazing Things To Do In Bangkok In 2 Days