Top Posts
8 Travel Hacks to Save Money on Flights...
How to Get Paid Market Research Studies and...
10 Things No One Tells You About Iceland!
Iceland Budget
22 Things to do in Peru besides Machu...
Israel Budget ~ How Much Does a Trip...
The 7 Best Bars in Barcelona to Have...
14 Reasons to Road Trip to Florence Alabama
My Cuba Budget
24+ Best Places to Visit in China Besides...
Home TripsEurope How to Pretend to be a Princess in Germany’s Disney Castle

So Disney may (or may not) have totally ruined my love life for all time, and that’s fine. I’ve comes to terms with that. It went even a step further when I went to the castle that inspired Cinderella’s castle for a second date while I was living in Germany.  Poor American boys, do they even stand a chance?  My date introduced me to German foods and fairy tale castles.  Nope, American boys don’t stand a chance.

A very popular day trip from Munich is to go to Neuschwanstein Castle!!  Since I was living so close to Munich, and I love beautiful castles, I had to go!  After you’ve checked off a few places in your own Munich itinerary make sure to scoot out to this castle! This gorgeous castle was built by King Ludwig II (Commonly know as the Mad King, bless his heart).  What I really love about this castle, besides how beautiful it is, is that he built is with his own money.  That’s right. He was a king–an established crazy pants one, at that–and he chose to use his own money rather than public funds.  Nice.  He was a bit of a loner and wanted this to be his escape.  And it was pretty much just that until he died, and then it was opened up to the public to make some $$$.  Bummer for him, he actually only spent 11 nights there before he died.  And by died, I mean, they are pretty sure he killed himself. He was 22 :/

Fun Fact! ~ It was actually called Neuhohenschwangau (High/Upper Swan County) but was renamed Neuschwanstein (New Swan Stone) after his death.  Hohenschwangau and Schwanstein were other palaces in ruins in the area

Here’s Hohenschwangau. The poor thing often gets overlooked by it’s more glamorous neighbor. I’m sure we’ve all felt that way.

What Makes it Interesting? 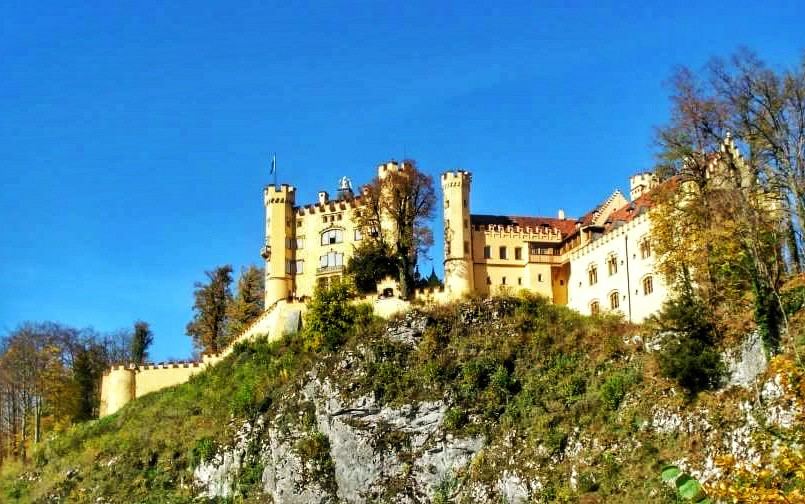 Well besides that they modeled Disney’s castle after it…

The castle has some pretty stunning rooms.  You wouldn’t know it from looking at it from the outside, but every room has a very different theme.  They are modeled from Wagner’s operas!  Sure, Wagner was a bit antisemitic, but Ludwig went nuts for him (the music, I’m hoping, not the antisemitism). 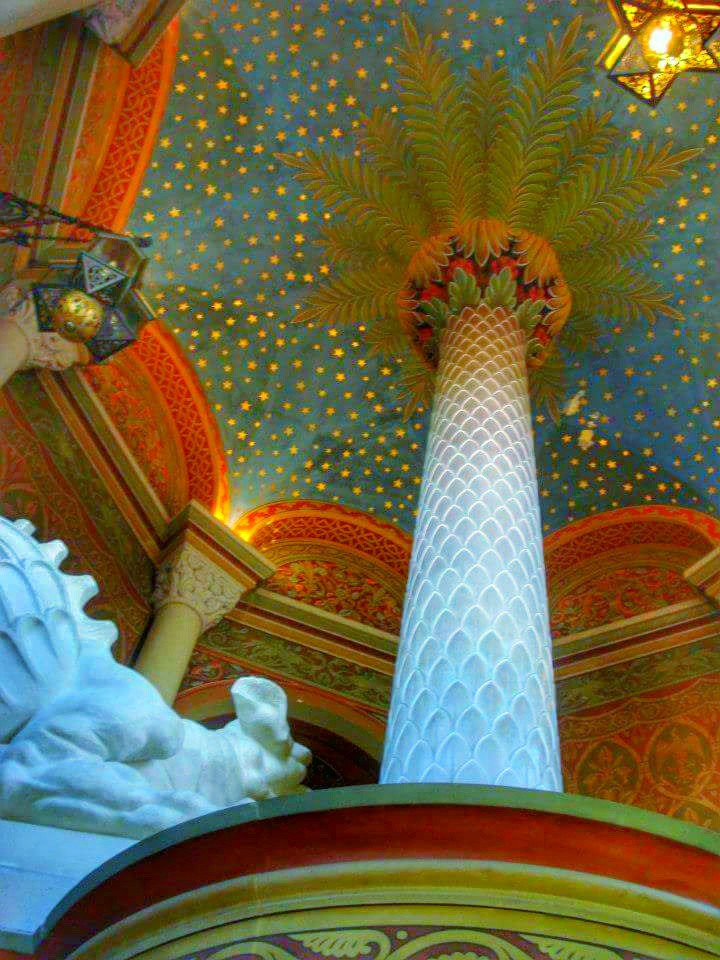 I actually wasn’t even supposed to take certain pictures, but what can I say. I’m a rebel. 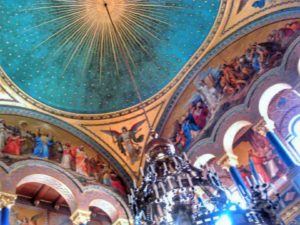 One room was even designed to be a cave.  A CAVE!!!  No pics of that, unfortunately.  No pictures means no flash means pretty low quality in a dark room. Since it was, ya know, a cave.

Ok! Sounds Pretty Cool!  How Do I Get There?

Well, you’re pretty smart!  It is pretty cool!  You can check out the site for yourself, or you can let me break down the options for ya.

I’d also buy those tickets online. They are still available there, but it will save some time in case there are lines!

1.  By Car ~ It’s about 2 hours from Munich on the A7.  If you look above, that’s me being totally jazzed about getting to drive on the Autobahn!   It was a lovely drive!  This is a great option if you’re on your way to other places or like going at your own rate!

2.  By Train ~ You’d have to go to the Fussen Bahnhof, and from there take a taxi or bus.  It’s about an hour from Munich to Fussen, and trains leave regularly on the hour;  you don’t even need a reservation!  If you take a taxi, it’ll be a little more, but can get you closer. To take a bus, it’s about 5 euros round trip, and a 30 minute walk each way.

3. Take a Tour! ~ There are tons out of Munich, and run like $40-50 (but you also have to buy your ticket once you get there for most of them).  Pros: You get someone to tell you tons of fun facts that you might not get otherwise, and you don’t have to deal with anything!  Cons: You don’t get the freedom of wandering around at your own pace and possibly checking out Fussen as well.  Here’s an option.

Here’s a longer post that breaks down the options in greater detail!

And some other Munich Day trips!

What can I expect? 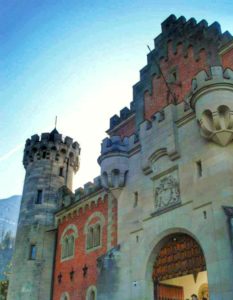 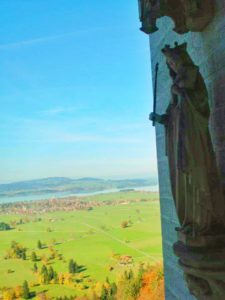 And some lavish interior design! 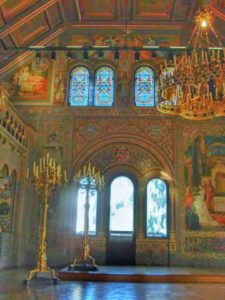 Ok… so How Am I a Princess?

I mean, c’mon. Just look out this window, stare wistfully, give a big dramatic sigh, and pretend like your father doesn’t understand you at all, and that you can talk to your pet animals. 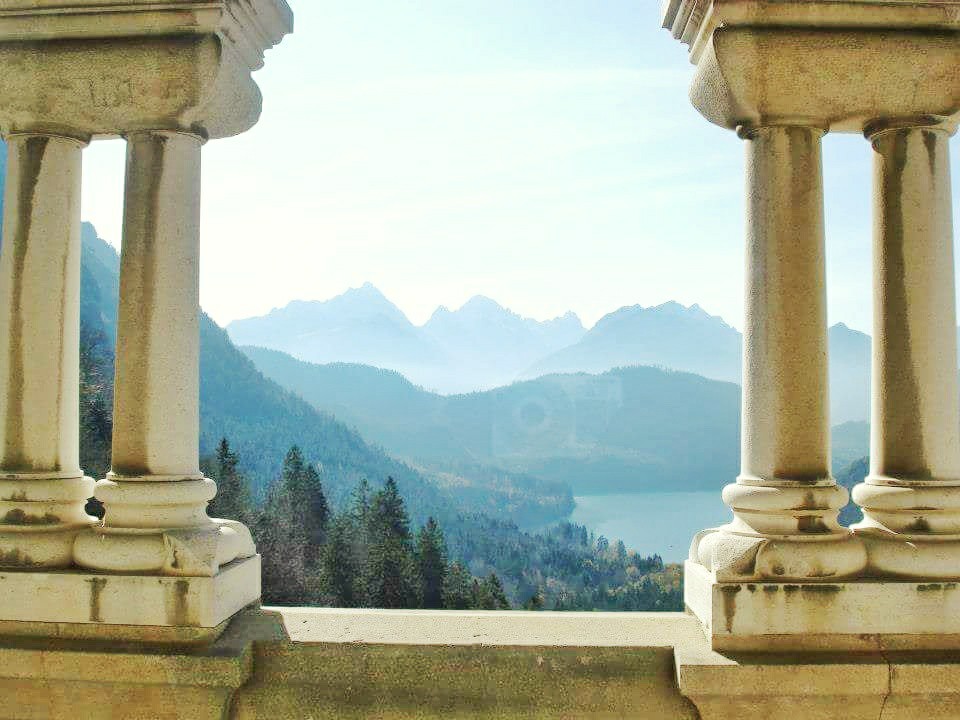 Have you been? Heard of it? CAN’T LIVE ANOTHER DAY UNTIL YOU GO?!  Drop a comment below! Or pin this to remind you later!

[…] our third date, he took me to the Neuschwanstein Castle in Bavaria.  It’s well known as being the castle that inspired the Disney blue and white […]

[…] our third date, he took me to the Neuschwanstein Castle in Bavaria.  It’s well known as being the castle that inspired the Disney blue and white […]

Hi there to all, how is the whole thing, I think every one is getting more from
this web site, and your views are pleasant for new people.