Top Posts
How to Get Paid Market Research Studies and...
8 Travel Hacks to Save Money on Flights...
22 Things to do in Peru besides Machu...
10 Things No One Tells You About Iceland!
Israel Budget ~ How Much Does a Trip...
My Argentina Budget!
24+ Best Places to Visit in China Besides...
14 Reasons to Road Trip to Florence Alabama
Bamahenge and Dinosaurs in the Woods ~ Gulf...
Iceland Budget
Home TipsProduct Reviews How to Make a Tiny Planet with 360 Camera

How to Make a Tiny Planet with 360 Camera

I’ve been on the hunt for a 360 camera since I saw a Tiny Planet Video on Youtube.  I thought it was the coolest thing since sliced bread.  The pictures were so interesting, but I thought the movies were even cooler!  So below is my struggle to find the perfect one to join the ranks of people making tiny planets! I bought these (and returned the ones that weren’t good!) with my own money, so this is an accurate review of them.  There are some affiliate links in here which will give me a small percentage of the purchase price at no extra cost to you. I’d appreciate if you use them if you decide to join me with these awesome products!

How to Make a Tiny Planet … Without 360 Camera

First I tried using an app that would create the tiny planets from a panoramic shot.  Yikes. 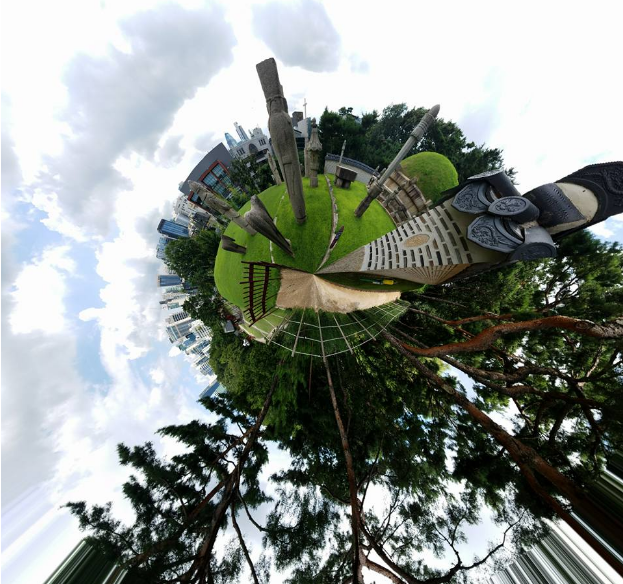 Without the special camera, it comes out very messy and crazy looking

It was too difficult to get a perfect 360 because I didn’t know when to stop spinning!  Plus when it was morphed together, it just got wildly distorted. Look at the bottom right!

So then I tried 2 different cameras but returned them.  They were so difficult to use.  One of them had so much potential because it was waterproof, but the directions were so complicated just to get the SD card formatted, that I quickly abandoned ship on that one.  The other one worked OK, but then it was very difficult to edit the pictures and video. Back to the drawing board.

Try Try Again!  I finally stopped trying to cut costs by buying an inferior product and bought a more expensive one but still very reasonably priced tiny video camera.  I ended up getting the Ricoh Theta SC.  When I got it, it was $330, and it’s currently $170, dang lol.  I’d definitely jump on this because I don’t know how long that price will last!


Why is this tiny video camera better?

This camera is SO easy to use.  You just download the app (Theta S), connect your phone to the camera’s wifi (You don’t actually need to be on an actual wifi), and you’re ready to go.

I was even able to use it while walking, at night, in the dark, in the cold!

Plus the SC comes in lots of cute colors!

Want a free camera? – Do some paid market research studies to earn money!

How do you edit the tiny planet?

I know there are ways to edit these things with fancy programs on a desktop. But this little camera is so easy and all edits can be made on your phone! 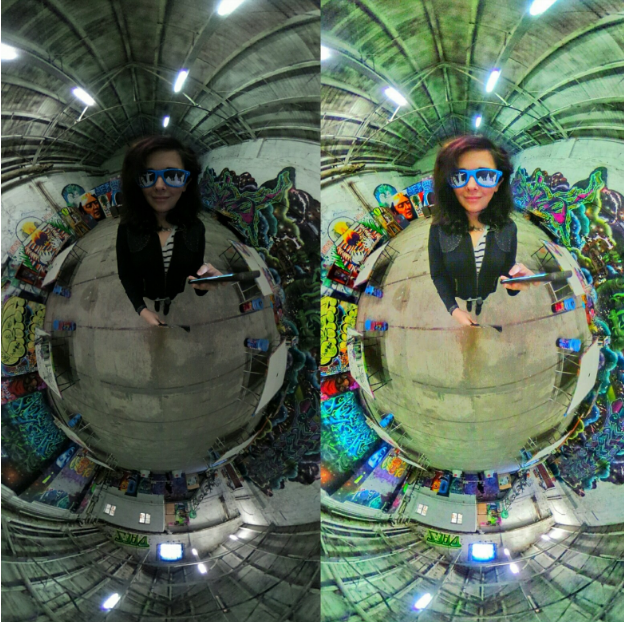 The room was so dark that it needed a little lightening.. but look how cool it looks with contrast and saturation!

I got an #AirBNB #cabin in the country near #reykjavik. Just walking around and you can see one pair of #horse tracks and one set of car tracks! Very secluded and lovely!

The M15 was the first one, then the S (which was considered better for multiple reasons), and then the SC.  M15 is said to be a bit more pixelated with shorter recording times.  The S came out and had better picture and some more features.  The SC is supposed to be just as good as the S, but with a happily cheaper price tag! If you want to get technical, which I don’t, you can read this rundown.  I’ve only owned the SC, and I can tell you that it does everything that I need from it.

What else can it do?

Besides the adorable Tiny Planets, it also makes “Disco Ball” (I think of them more as Snow Globes) and interactive 360 “pictures.”  You might have seen them before on Facebook.  They are the ones where you can pan around, up and down, and all around!  You can also manipulate into Wormholes, Flat or Straight. 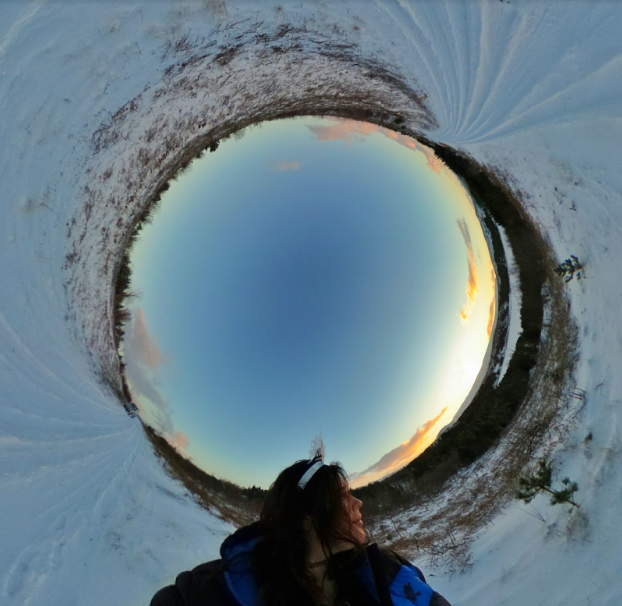 I think that’s personal preference.  I enjoy nice symmetry which was easy to obtain in Iceland. It’s easy to achieve when everything around you is about the same. So where I was in Iceland was all flat, so I got almost a perfect circle!  For my trip in Berlin, I used it inside for the first time, and I wasn’t sure how the ceiling would turn out, but it turned out awesome! (That’s the one in the Snapseed comparison).

After owning this camera for a bit, I found this site with some really WILD ideas! I can’t wait!

What else do I need?

Honestly, beyond the camera and the aforementioned apps, you’re pretty much good to go. The only other item I’d suggest would be a selfie stick or tripod.  It reduces how big your hands look in the picture.  It has the standard threaded connection for tripods at the bottom.  I bought a Go-pole because it can be used for action cameras or this camera!  And I like how far that it extends.  You can get shorter ones, but this one could be long or short. Why not get one with that capability? Weird story, but it came in handy when I was riding on a tank.

Here I am trying to use my camera for the first time. It’s so easy that I was literally doing it while walking into work.  Notice how huge my hand looks and how you can still see the sleeve around it?  I also used Live Planet 360 for this picture, and it left a watermark.  That is why it is not included in my recommendations! 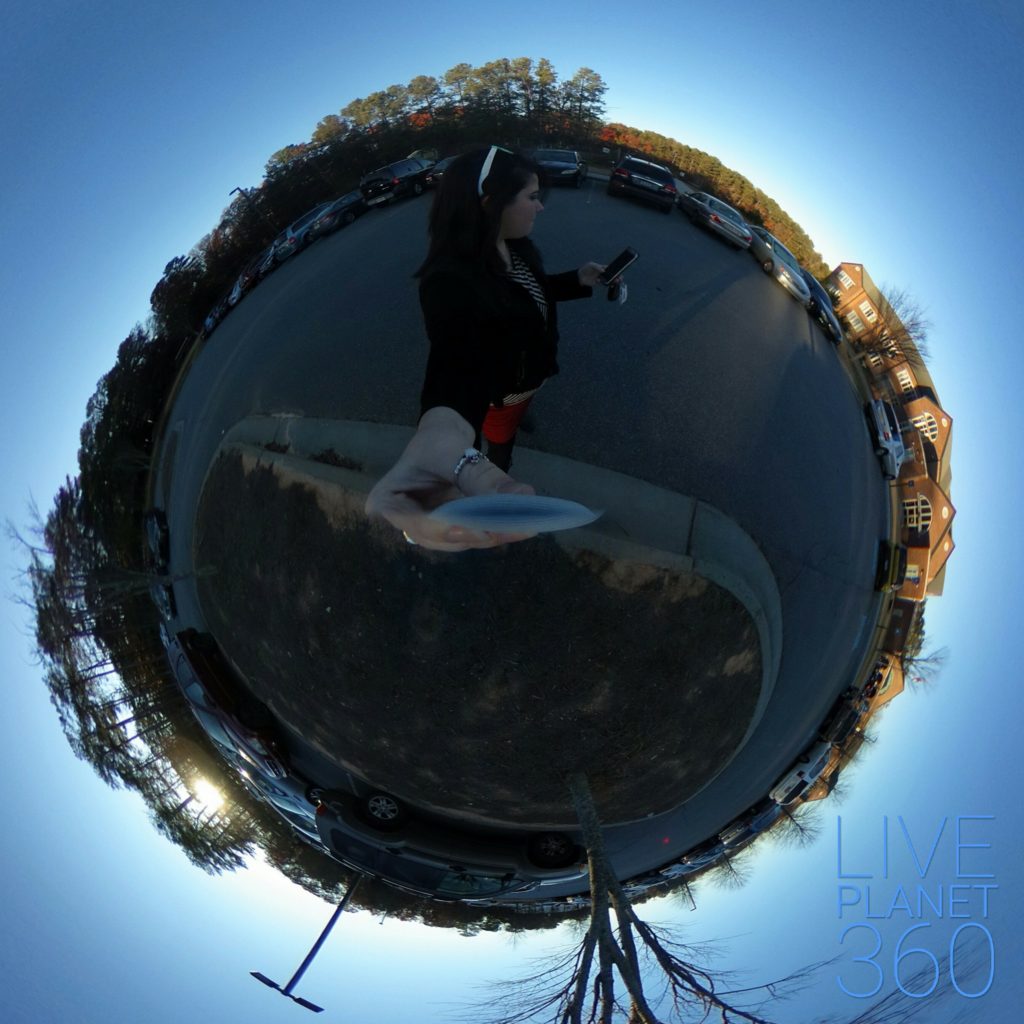 See how big my hand looks without a selfie stick?

If you want to set your camera down and not be in the shot, I suggest a tripod.  This tripod is great because it’s long and skinny before it flares out. Just like my hand up there, the farther away from the camera, the smaller it appears. With this tripod, the legs will hardly be seen.

The following aren’t strictly necessary, but they are amazing for keeping your camera safe, accessible, and out of the shots!

How to Get Paid Market Research Studies and Paid Focus Groups

30 of the Best Cities in Morocco. Let me be your Morocco Tour Guide!

So glad I stumbled upon your site. For one, I love these photos and really want one of these cameras. But most of all, I am about to start leading EF Tours with students from our school, so nice to read a bit about those tours.

The 360 cameras are amazing and very small! That’s awesome that you’re taking students somewhere! I’m sending you a message about it now!

Love the wormhole picture – so surreal! Looks like a fun toy to play around with! Have you tried it in cityscapes too – like with iconic landmarks?

Yeah! I have some with the Chicago Bean and some NY buildings!

Must look really cool with skylines too then 😀

Loved this post, will have to bookmark it for when I travel. Amazing photos and videos (:

I simply want to mention I’m beginner to blogging and absolutely liked your web blog. Most likely I’m planning to bookmark your website . You definitely have outstanding posts. Cheers for sharing your web site.

Thanks for one’s marvelous posting! I genuinely enjoyed reading it, you
could be a great author.I will always bookmark
your blog and will eventually come back someday.
I want to encourage yourself to continue your great writing,
have a nice weekend!

Thank you! I hope you get one of these cameras!

Just saw this kind of photos recently and thats why your post caught my curiosity – I actually didn’t know you need a special camera for that, I thought it was only an app 🙂 It looks really cool tho!
hugs, Nana

I saw one and had to track it down to see how to do it! I love them!

This is just in time. Believe it or not I was searching for a blog about this idea but I had no idea what to type in google. I am so technically challenged. 🙁

Then this camera is for you! It makes it so easy! I sent back the first 2 that weren’t. I wanted to use and write about one that was worth it!

That looks super cool! I always wondered how those were done! I might have to try one of these!

I hope you do!

I’ve seen this camera a few different times. The photos turn out so unique – I like it! Love how you showed the editing, it’s good to know!

how cool is this! I dodn´t even know somehting like this existed! Thanks for sharing 😉

What a fun camera. Love all the cool tricks and styles of images you can create. I’ll have to look into this further to make my pictures more playful. Thanks for sharing.

Great info, what a cool little contraption! Its great that you can edit it from your phone too, post production is my least favorite part of generating blog content.

Very cool post. I think 360 cameras will be the next big thing after the drone. Such cool shots.

I think so too! Except infinitely cheaper than a drone!

I’ve seen so many of these photos and had NO idea how people were doing it~ they’re so visually interesting! Definitely will come back to this when I decide to take the plunge and snag a 360 camera.

How cool! 360 cameras are the next thing I think. Great shots.

This is so fun and quirky! I think I tried the app once but horrible and messed up! It seems you made a good science out of it and it shows from some of your mini globe pics. I think I like the one from Iceland best.

I’ve never really thought about taking pictures like this, but the ones that you have here are really nice. Maybe I will have to take your advice and give it a try!

Thanks for the tips. Looks like a cool idea. Certainly makes some interesting pictures.

Totally funky! The pictures a really cool! Coincidentally I was looking for a selfie stick for my phone. Was the App that you used an iPhone app?

I have an android, but I think they also have for iphone!

Wow. I had seen photos like these on Instagram but I had no idea how they were created so thanks for explaining. I’m surprised the 360 cameras are relatively inexpensive – I had thought they would be thousands of dollars but I guess we live in the future now 🙂

This is so cool! I am WAY behind the times and always wondered how people made these badass photos! Thank you for enlightening me and bringing me to present times!