Top Posts
8 Travel Hacks to Save Money on Flights...
How to Get Paid Market Research Studies and...
10 Things No One Tells You About Iceland!
Iceland Budget
22 Things to do in Peru besides Machu...
Israel Budget ~ How Much Does a Trip...
The 7 Best Bars in Barcelona to Have...
14 Reasons to Road Trip to Florence Alabama
My Cuba Budget
24+ Best Places to Visit in China Besides...
Home Bucket Lists G Adventures Jordan Group Tour Review!

My G Adventures Jordan Highlights tour was a part of my Middle East Adventure!  I originally found a good deal for a trip to Egypt, and decided to tack on Jordan and Israel as well!  I was originally only interested in Petra tours from Amman, which I think set me up with very neutral expectations for the rest of the country. However, I found this tour and ended up being blown away by Jordan! I’ve reviewed each aspect of the tour below.

Headed to the Middle East too? You might find these articles helpful as well!

I adored my guide! His name is Zuhair, and we affectionately dubbed him Zu-bear.  Zuhair was so knowledgeable and actually lived in one of the cities we visited… Jerash!  One of the reasons I really love G Adventures is that they hire local guides, and they just have so much better insight into the area you’re visiting. 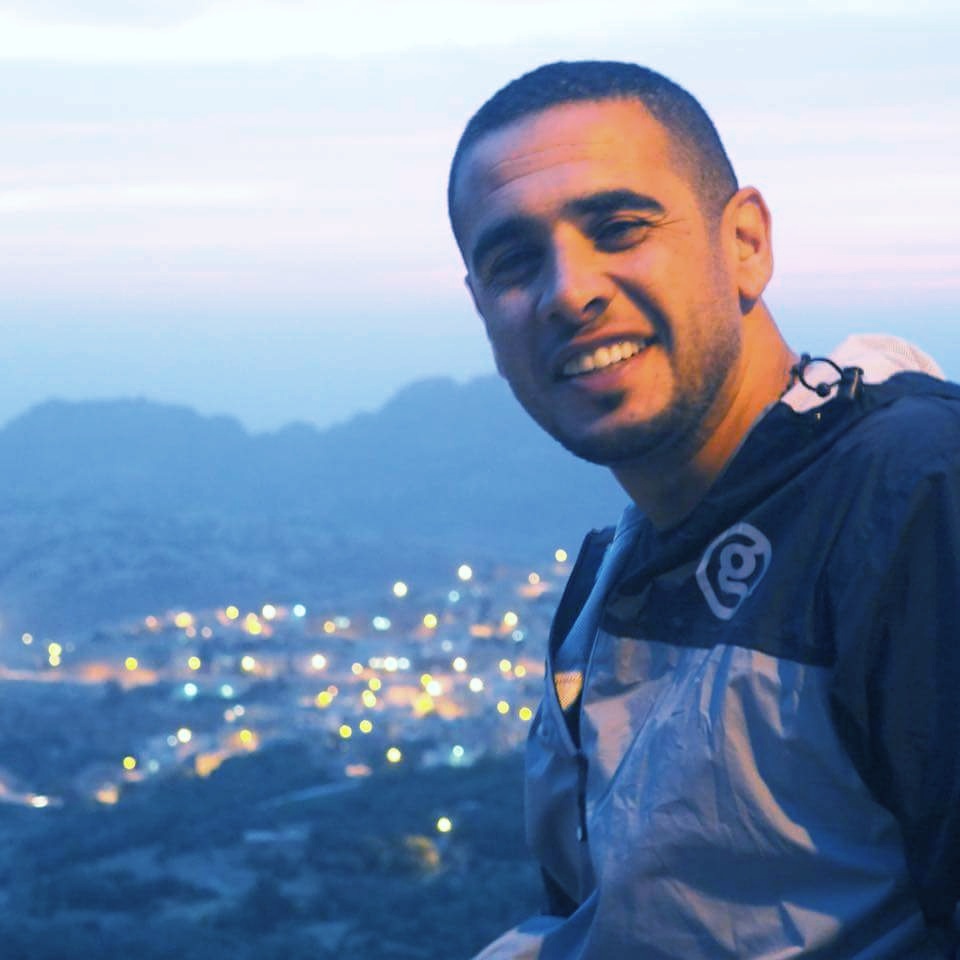 Zuhair was always exceptionally upbeat, enthusiastic, and accommodating!  I had opted to forego the tent camping in Wadi Rum for the luxury splurge of sleeping in a Bubble Tent!  Zuhair made sure to find a driver to take me out there, pick me up the next day, and easily rejoin the group–all with a smile!

He was very passionate about showing off his country that most of us knew nothing about. Admittedly, most of the people in the group were just there to see Petra, but he showed us a country steeped in Biblical History, architecture, and welcoming people.  Jordan is now one of my top 5 favorite countries, and I attribute a lot of that to Zuhair’s gracious guiding.

It’s just arriving in Amman and getting to the hotel for the welcome meeting!

I didn’t know anything about Jerash, but it was actually where Zuhair was from! He was really excited to show us around the very ancient city. I loved seeing where the old city met the new city.  Afterwards, we ate lunch next to the Dead Sea.  Make sure you bring your bathing suit! 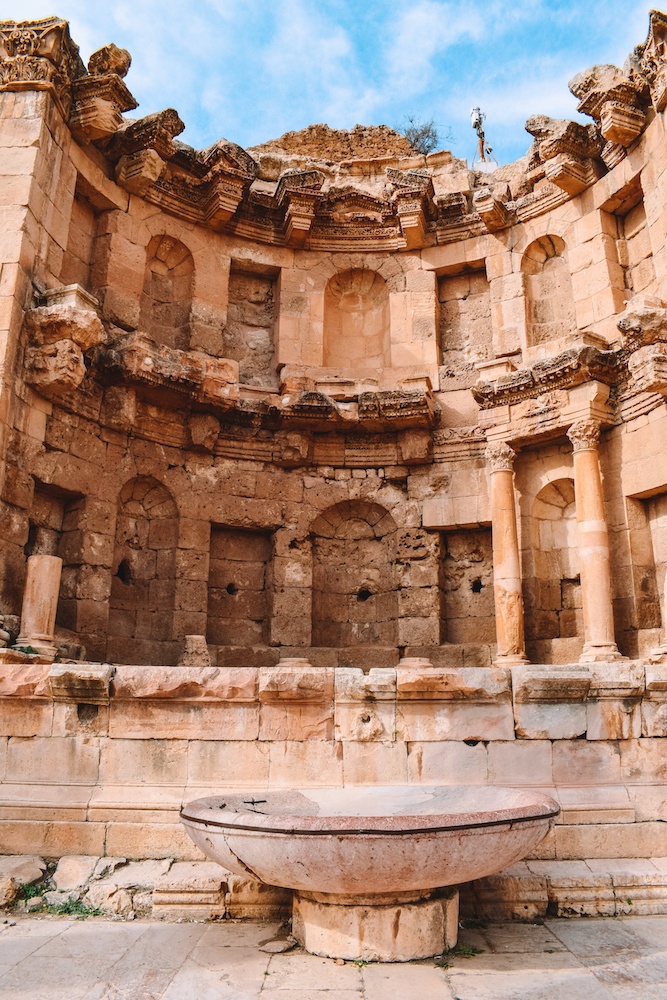 Madaba is famous for the mosaics that can be found all around Jordan! I was surprised about the types you could find!  There was a giant map of the Holy Land which made me realize that I never associated Jordan with the Holy Land.  There were also Crusaders, dragons, peacocks and more!

Later in the day was to Mt. Nebo where it is said Moses first saw the Promised Land, but he would never make it there. 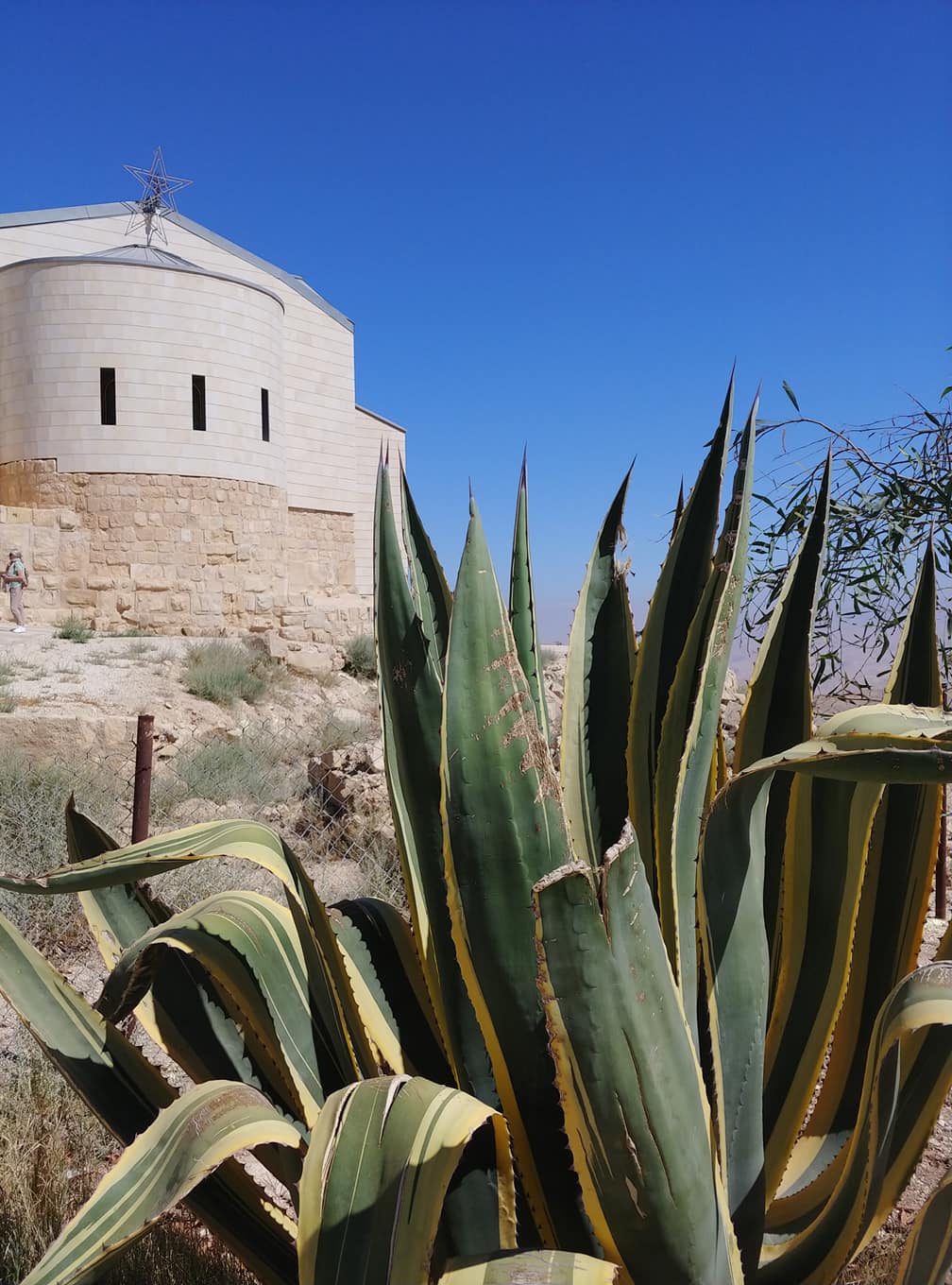 The main event… Petra!!!  I felt like Indiana Jones walking through the Siq to find the Holy Grail! It definitely lived up to the hype and more!  What’s nice is you can explore as much as you want!  There are tons of hiking trails, but if you’re not feeling up to it, you can walk back, take a cab to hotel, and relax.  There’s also an option to see Petra at Night.  Most people said it wasn’t worth it.  I went to a Turkish bath instead which was… an experience lol. I wouldn’t say it was relaxing, but it was something. 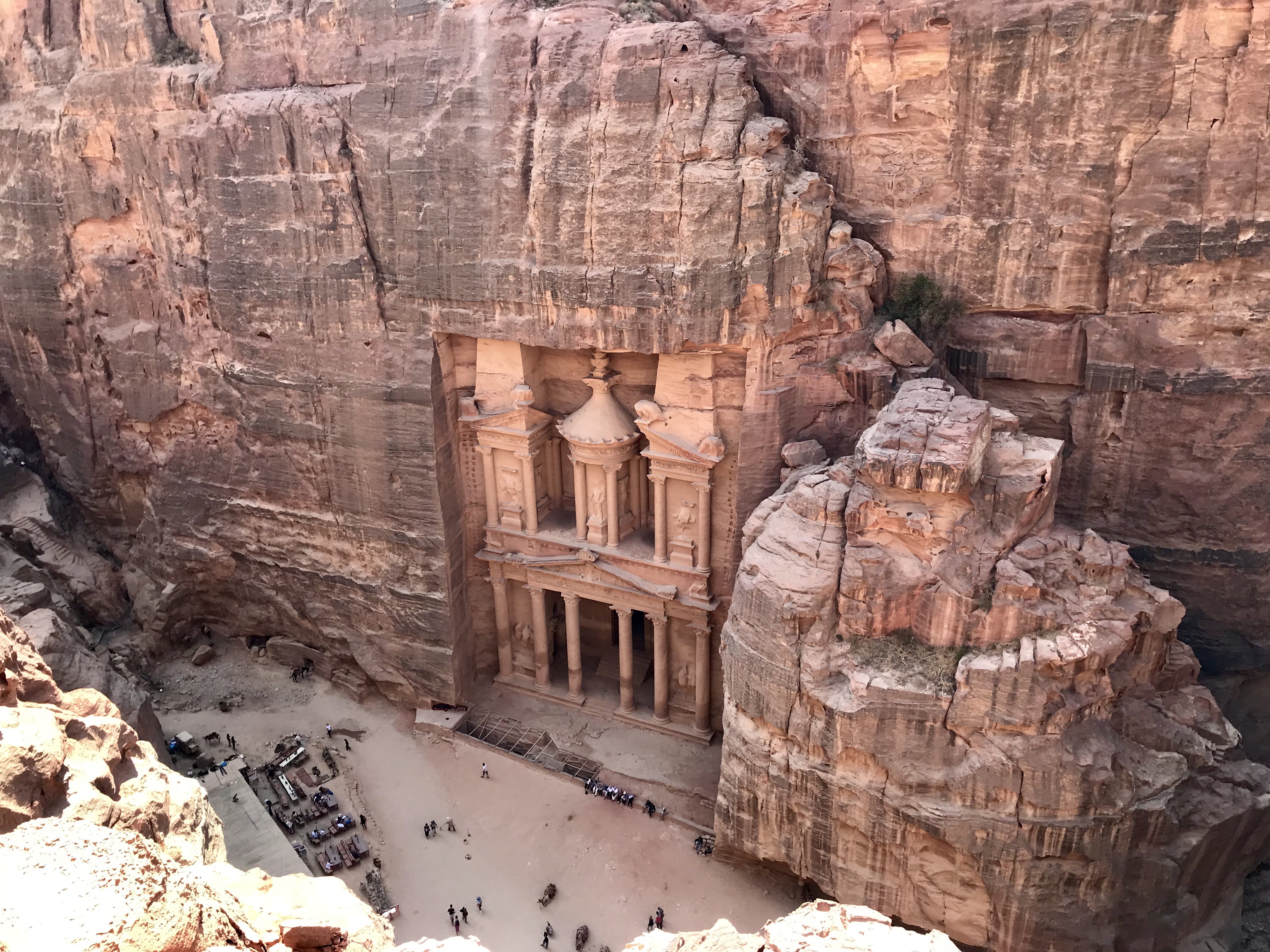 This is Petra from a different angle!

We also got to see Little Petra, which was a much smaller version of Petra.  It was carved by the same people as a stopping point for traders on the way to Petra.  Day 5 was also for Wadi Rum!

The 4×4 excursion into the desert was SO FUN!!!!!! If you’re looking for some adventure travel in Jordan, Wadi Rum is where it’s at! We were bouncing, jostling, and laughing!  I opted to skip the Bedouin camp since I’d be to one in Morocco, and instead went to a Bubble Hotel also in Wadi Rum.

Wadi Rum was like driving on Mars, which is why it has been a film location for movies based on Mars (The Martian, for example). 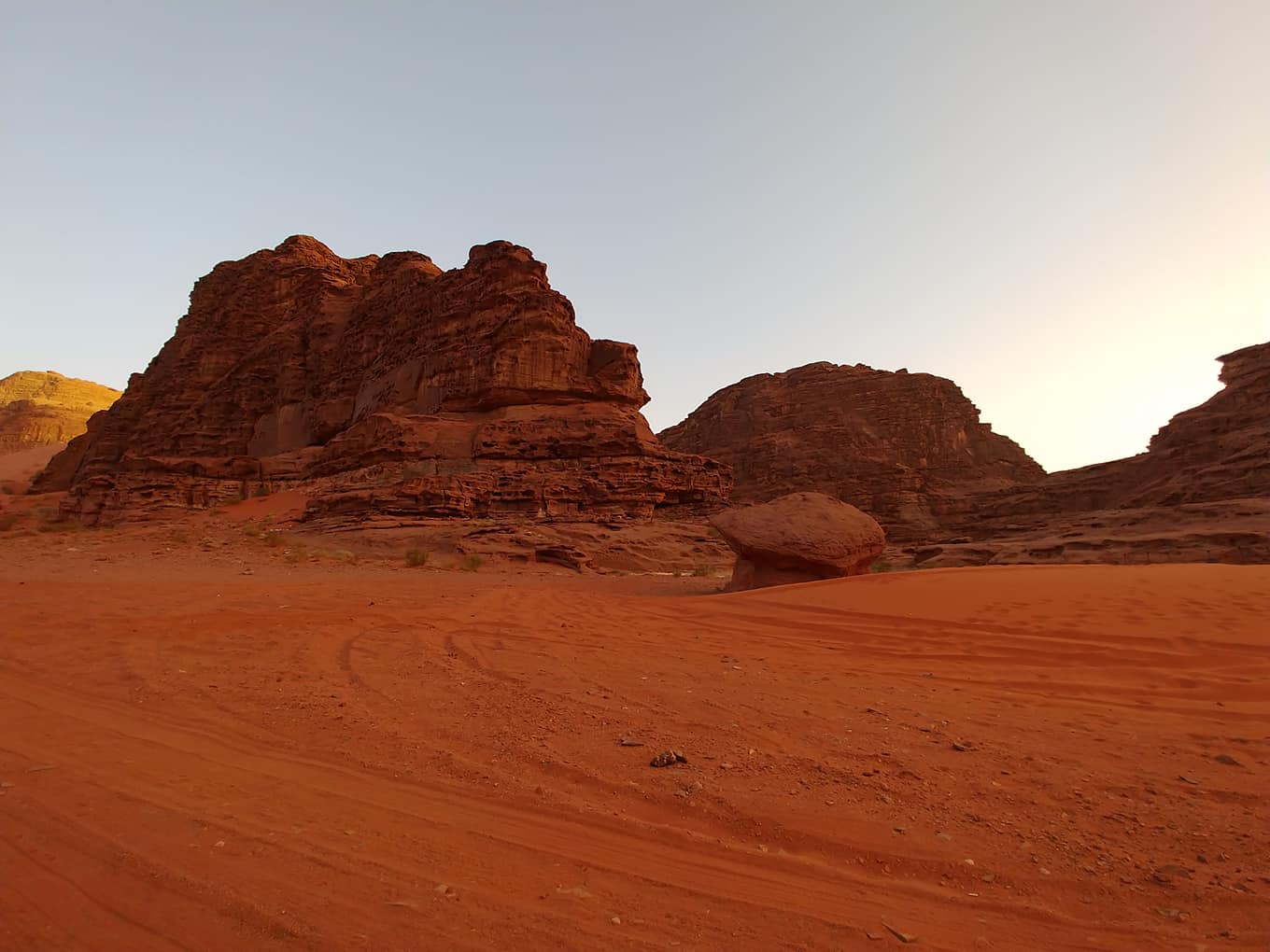 Next up was Aqaba!  This is Jordan’s main port city on the Red Sea!  The Red Sea isn’t at all Red, and it actually a gorgeous and vibrant blue.  The whole group opted to rent a boat and take a snorkeling trip together!  Since I had already been diving in the Red Sea, I was happy to stick around with my new friends and explore the water from the top. 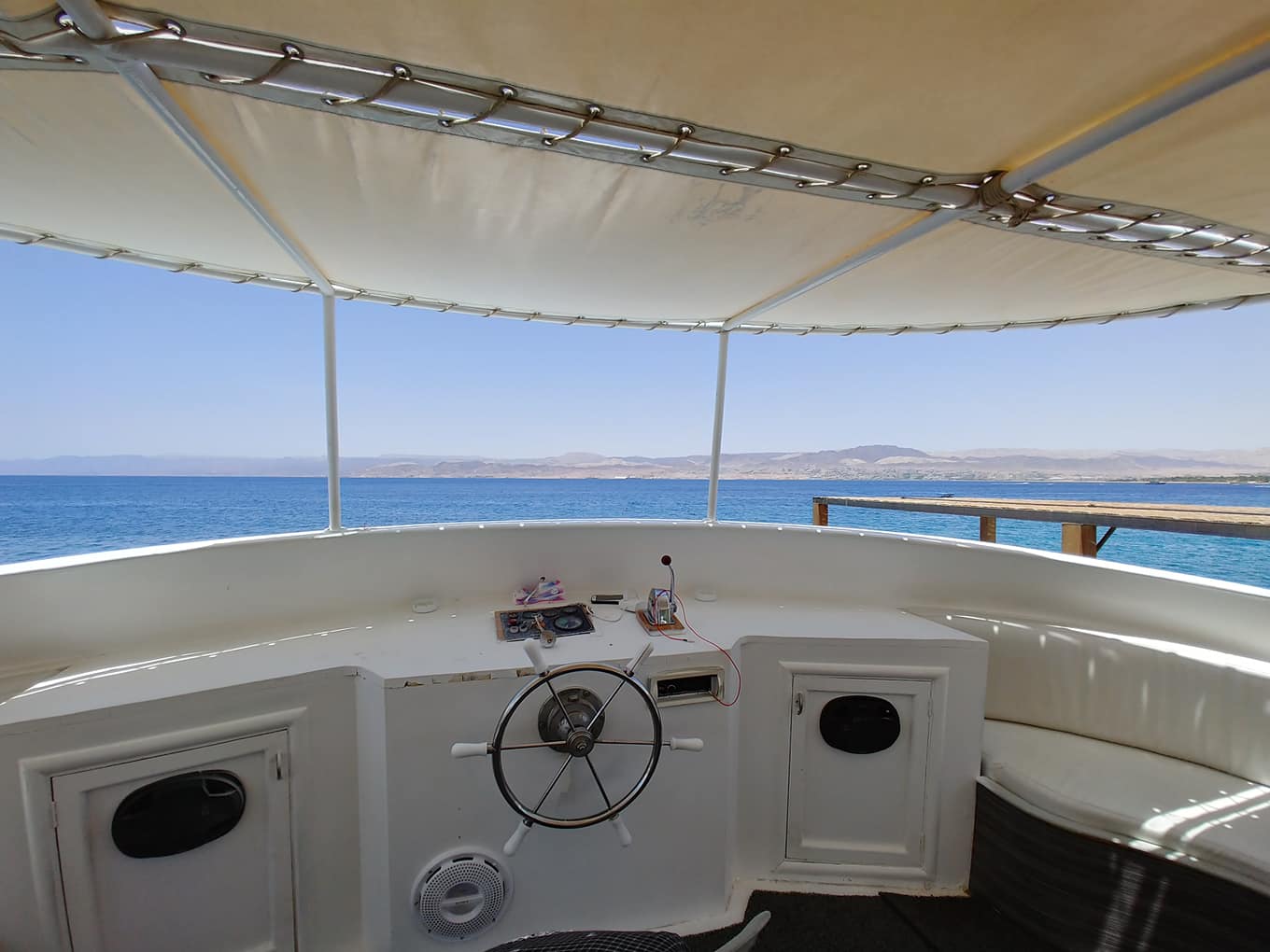 The water is definitely not red! Blue blue blue!

Aqaba was a fun spot, but only for the night!  Then it’s back to Amman! Along the way is one of the G for Good Moments at a community cafe with included lunch, and a few other stops if everyone agrees to it.

This was a Classic tour, so the rooms were in hotels instead of hostels.  I shared my room with another girl who was also doing some solo travel in Jordan. All of the hotels were very nice looking, although one of them had a slightly harder bed than I prefer, but still, overall, I liked the hotels.

My favorite hotel included in the tour was the Oscar hotel in Petra!  They had a giant Oscar statue and a lovely terrace to watch the sunset. 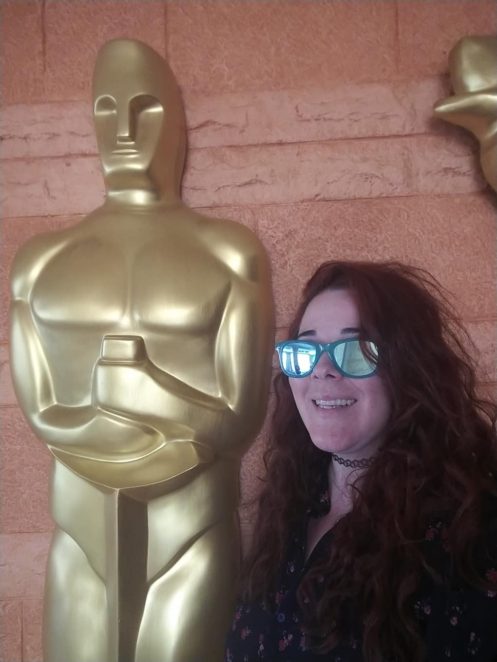 As I mentioned above, I did sneak away from my tour to stay in the Bubble Hotel.  It was obviously not included in the price of the tour, so I just booked it on my own.  That was a whole other experience! You can read more about my experience there in my Jordan Budget.

Transportation for Tours from Amman to Petra

Luckily, my tour group wasn’t full, so several of us ended up having the seat next to us free!  In my particular van, on one side there were single seats, and on the other was a two-seat space.

The van always made frequent stops to get snacks, drinks, and bathrooms.  It was comfortable and clean, and the only recommendation that I could suggest is maybe to have a cooler of water as I’ve seen on some other tours.

Food During Your Adventure Travel in Jordan

There weren’t too many meals included, but the ones that were were pretty good!  The breakfasts were a buffet with a variety of cheeses and veggies. There were occasionally some eggs (more often than not).

Lunches always had a wide spread of meats and sides.  I was surprised at how many casserole type dishes they had.  I guess casserole might not be the best way to put it, but they were a mixture of lots of foods into one. 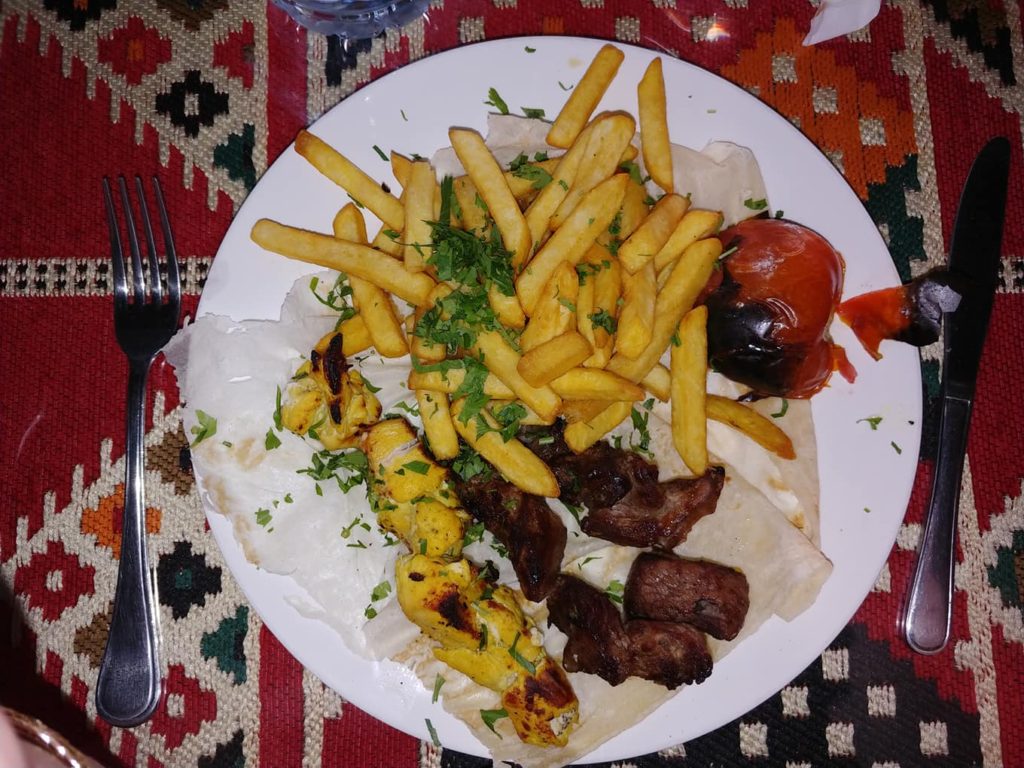 Dinners weren’t included anywhere but at the Bubble Hotel.  I actually don’t mind paying for meals separately because then I have more control over what I get to eat!  I was happy to be able to choose from a menu!

The desserts were very interesting. I feel like they were mostly gelatins!

We pretty much always ate with the group with the exception of a few times when we had time to ourselves.

I would say that we were afforded some free time almost every day, and then, of course, there’s always the structured free time.

Anytime we went to a new place, Zuhair would tell us about where we were and take us around.  Sometimes that meant the whole group toured around together, sometimes that meant he’d give us some background info and then we were free to wander ourselves and be back at a set time, and sometimes we were given options of what to do.

Most of the time, the group ended up all picking the same options.  The only times that weren’t true was when I snuck off to the Bubble Hotel alone and one other participant was the only one who signed up for the Hot Air Balloon ride.  I probably would have gone on that too because I’m all about maximizing my experiences, but I had just done one a few days before in Egypt, so another one seemed a bit excessive at the time.

The most free-time I experienced was in Petra!  Zuhair took us all through the Siq and the Treasury (the two main sites), and then people split up from there.  Most of the group went ahead to the Monastery, and some (like me) just wandered the trails alone. I actually really enjoyed being alone in Petra because it was such a special place. Going at my own pace helped since I didn’t want to be rushed, and I wanted to see the carvings.  Bonus: I also ran into a fun couple from my Egypt tour in Petra and was free to walk around with them!

Of course, I also ran into several small kittens and felt no remorse in playing with them 🙂 And another time, I ran into a very charming little boy who convinced me to buy him some snacks with his slick hair and his sweet Transformers bike lol. 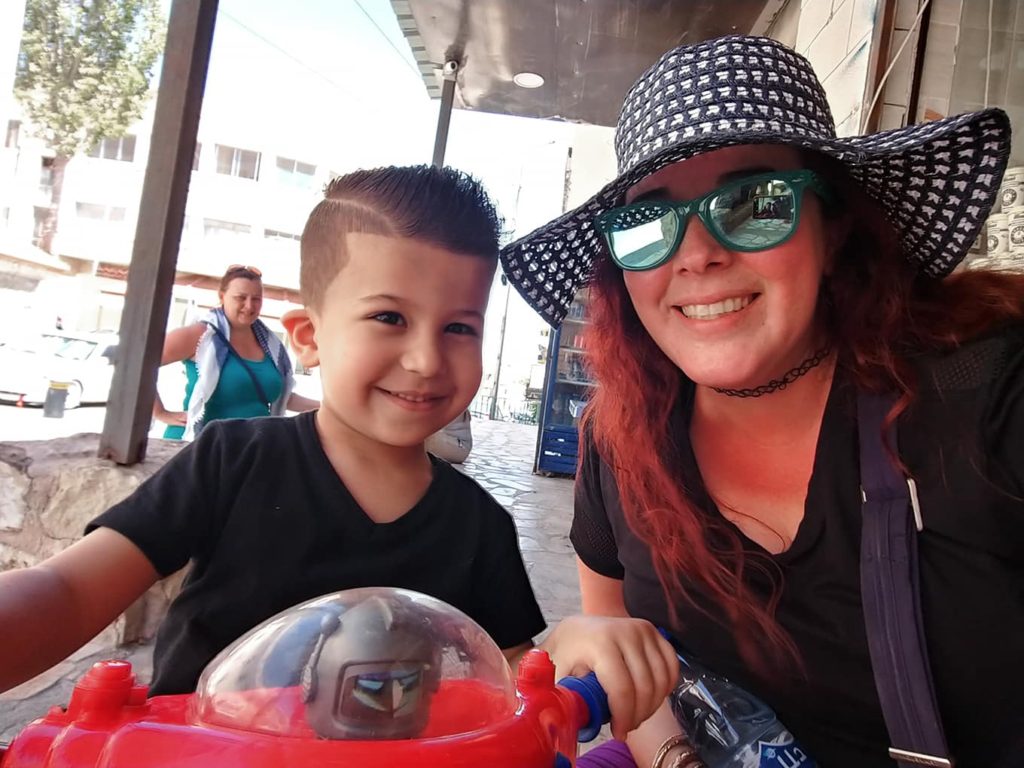 Oh gosh, this one is so hard because there were so many standouts!  I guess I have to go with Zuhair and the customer service! Not just for me, but Zuhair always went above and beyond to make everyone’s trip as perfect as possible.  He was also very patient in taking way more pics than necessary of all of us! Like that pic? – Learn more about how to make Tiny Planets with a 360 camera!

This was one of those amazing trips where nothing went wrong ::knock on wood::  Everything went very smoothly, and the only real problem was my own fault. I missed the welcome meeting and then forgot to wear my bathing suit for the visit to the Dead Sea.  Oh well… just walked in in my clothes and air-dried lol. Other than that, I wouldn’t really say it was bad, it just would have been nice to have the water bottles in the van, but not a huge deal.  I just made sure to buy a lot.

The most comparable tour to the Highlights of Jordan by Gadventures is the Intrepid Travel Jordan Discovery.  It goes to pretty much the same places, however, the price tag starts at $1500.

A more thorough rundown of what I spent on the whole trip (included and not included) is on my Jordan budget, but overall the price was $999 (although prices vary based on departure date) which is a comfortable per diem for the tour length.

How to Book
1. You should definitely consider using me as your travel agent!  It’s no extra cost, I can sometimes hunt down some freebies for you, and I put together a folder to make sure you have everything you need to have a smooth trip!2. You can book directly with G Adventures yourself.

3. You can book on a site like Tour Radar.  If you are new to Tour Radar, this 5% off code might work for you.

I think the price for G Adventures Highlights of Jordan is definitely worth it because of the quality of the hotels, transportation, guide, and sites visited!

Please comment any other questions you have about Jordan, G Adventures, or small group tours! 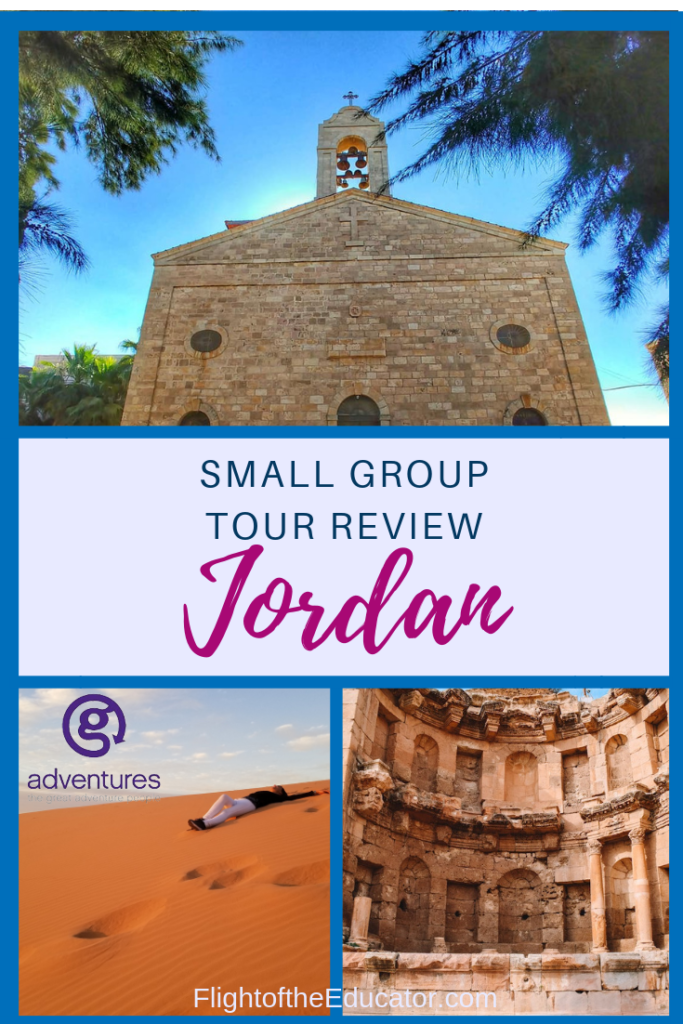 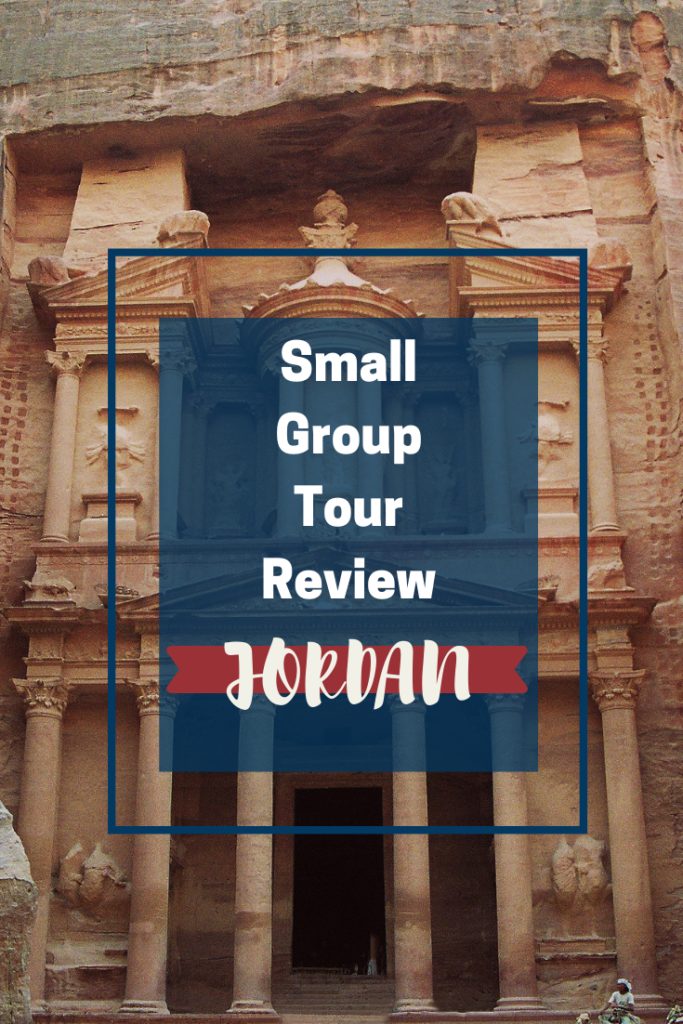 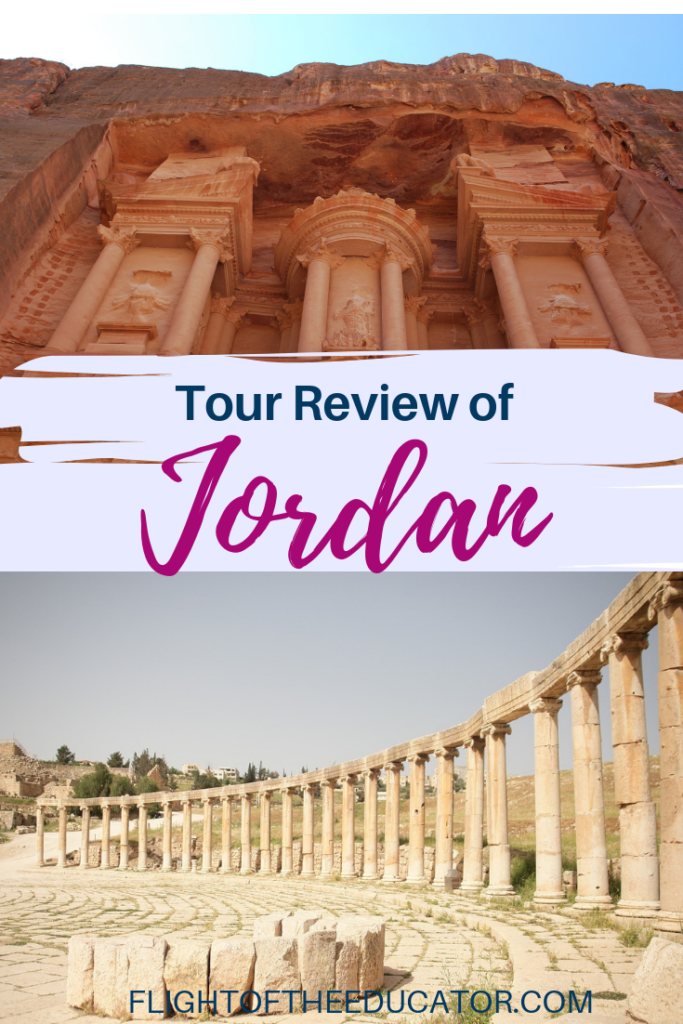 8 Travel Must Haves for a Relaxing Trip