Top Posts
8 Travel Hacks to Save Money on Flights...
How to Get Paid Market Research Studies and...
10 Things No One Tells You About Iceland!
Iceland Budget
22 Things to do in Peru besides Machu...
Israel Budget ~ How Much Does a Trip...
The 7 Best Bars in Barcelona to Have...
14 Reasons to Road Trip to Florence Alabama
My Cuba Budget
24+ Best Places to Visit in China Besides...
Home TipsCompanies Review Fun things to do in Berlin: Alternative Berlin Street Art Tour

During my quick layover in Berlin, I rifled through the brochures at my hostel and stumbled across the Berlin Street Art Tour and Workshop by Alternative Berlin! It was my third trip to Berlin, and I’d never heard of anything like this before! I’ll tell you what though, I’d certainly seen the graffiti, and I was keen to learn more about it!

So since I’d already puttered around Berlin, I wanted to try something different!  If you have the time, I suggest making your own $3 Hop on Hop off Berlin sightseeing tour the next day to see if you spot any more graffiti!  Especially if you have time for a 2 or 3-day itinerary! 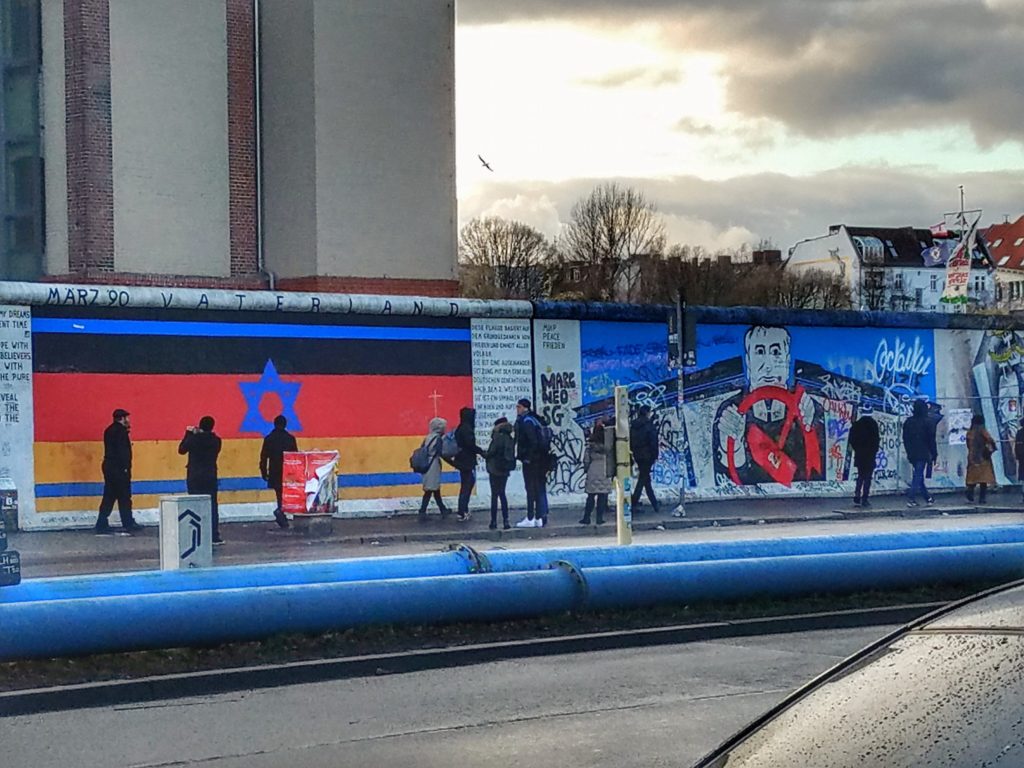 Berlin’s most famous use of graffiti is the Berlin Wall!

According to the brochure in my hostel, it was an 18 Euro tour, but once I got there, it was actually 20 Euro. Apparently it was an old brochure, but I guess it beats them having to carry around a bunch of 2 Euro coins. I’m pretty cheap, but I think the tour is worth it, especially considering all the cool stuff you get! 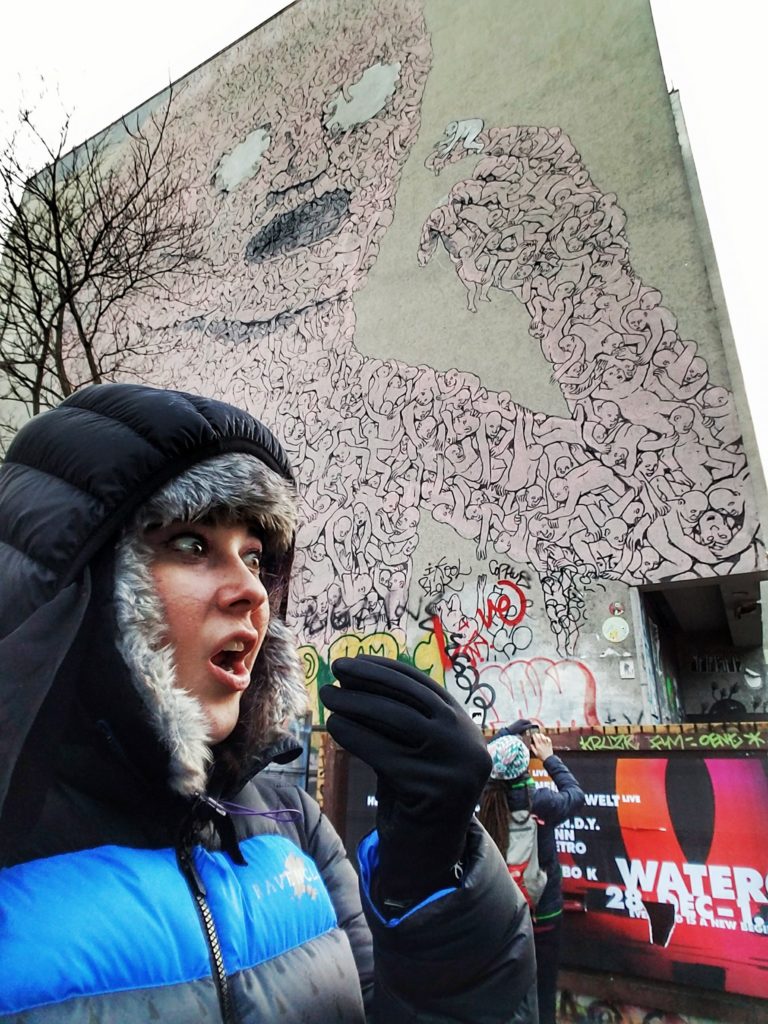 I definitely wouldn’t have found this gem without it. You’ll have to take the tour to learn what it means!

You get a dedicated tour guide that not only knows the city, but knows graffiti! My tour guide, Declan, actually said he has experience creating, and (as he said), “The arrests to prove it.” 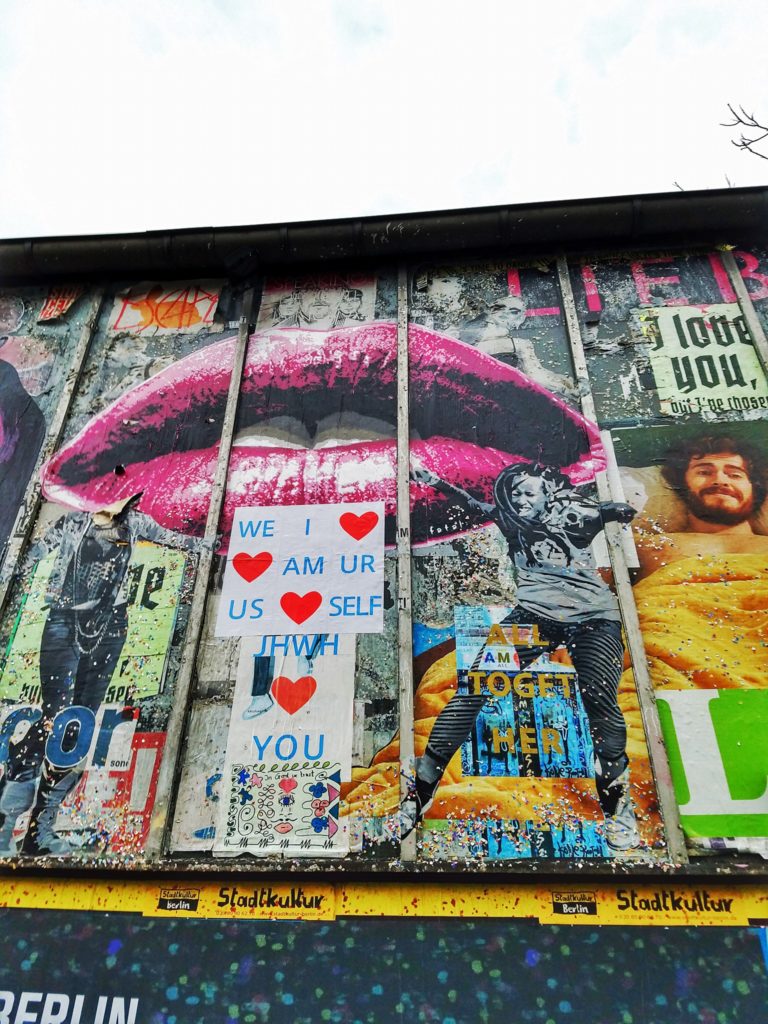 With his first hand experience, he was able to tell us about the different techniques used to make graffiti!

The tour started a little after Noon and went until after 5. The walking tour itself was only about two hours. My back gets stressed out from walking pretty easily, and I managed it. You get to see some really impressive wall murals, some graffiti that’s not impressive in itself until you learn how they did it, and I even recognized a mural by the same guy that did one when I was in Panama! So this tour upped my appreciation for what I thought were just scribbles not only in Berlin but worldwide too! 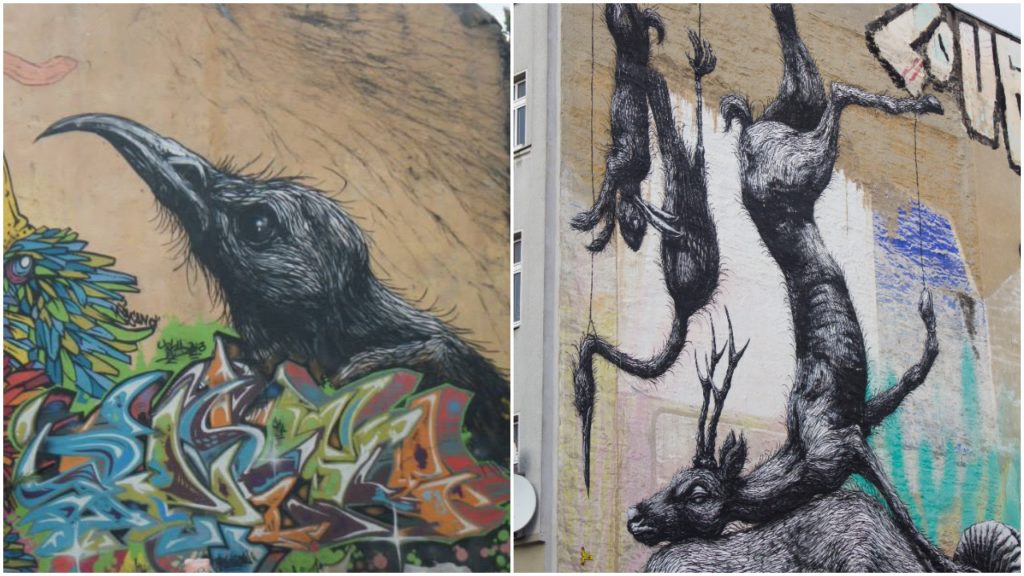 Left~ Cool Street Art I saw in Panama! Right ~ Street Art in Berlin that I learned the story behind. Same guy!

During the walking portion, you’ll be shown a variety of types of street art, graffiti, and taught the different vocabulary for them all! After the walking tour portion, they take you back to the warehouse where the real fun begins! You get to choose from a variety of stencils, or if you’re feeling frisky, you can make your own like I did! 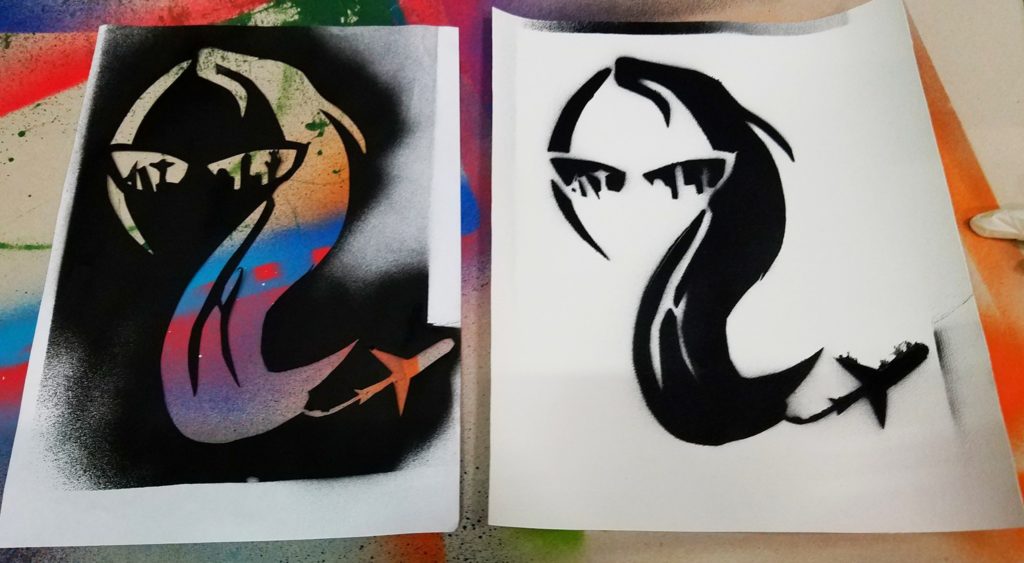 They have patterns available, but you can also make your own! I made my logo!

After you have a stencil, they show you what to do with it! They show you how to do a variety of techniques to make your very own street art. How cool is that?? Declan and Curtis were both guides, but we met back up with another guide named Rob. All 3 were readily available and helpful. I had a bunch of questions on how to make my logo, and they helped me make it. 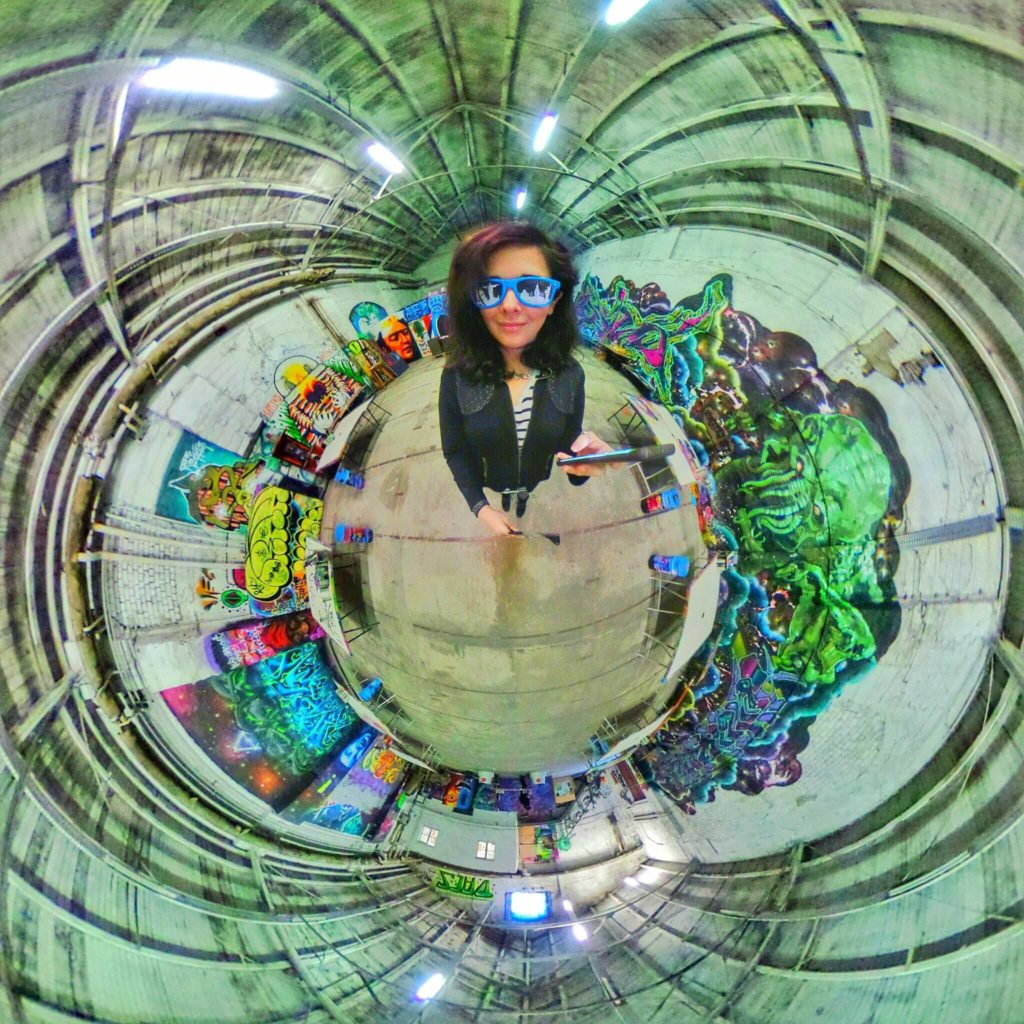 You have full access to their workshop! They showed you techniques, and you’re surrounded by inspiration!

You need to buy a separate rail/tram/bus ticket for the movement between different locations. I went ahead and got an all day pass for AB for 7 Euros. One way is about 3, so if you’re riding more than twice, it seems to make sense. 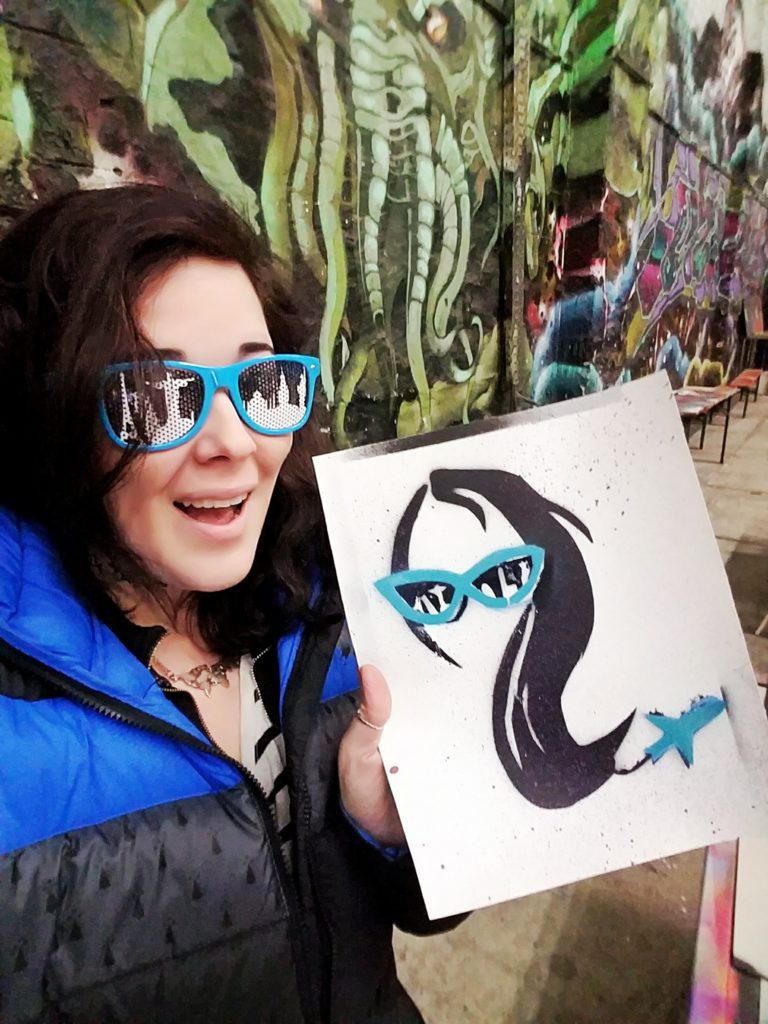 Know what else isn’t included? My awesome work of art. Make your own!

There is a quick lunch break, and you have to provide that yourself. Just fine with me as I really wanted a doner. I’m not sure if you’d stop at the same place we did, but the kebap place I went to was probably the best one I’ve had in forever.

Hopefully you’re convinced to go! The meet up is right outside the Starbucks at Alexanderplatz. Coming from the S-bahn (and I think U-bahn as well), head toward the giant tower and look to the left! Since I was there during winter, I huddled inside until I saw a few people milling around holding the same brochure that I had. 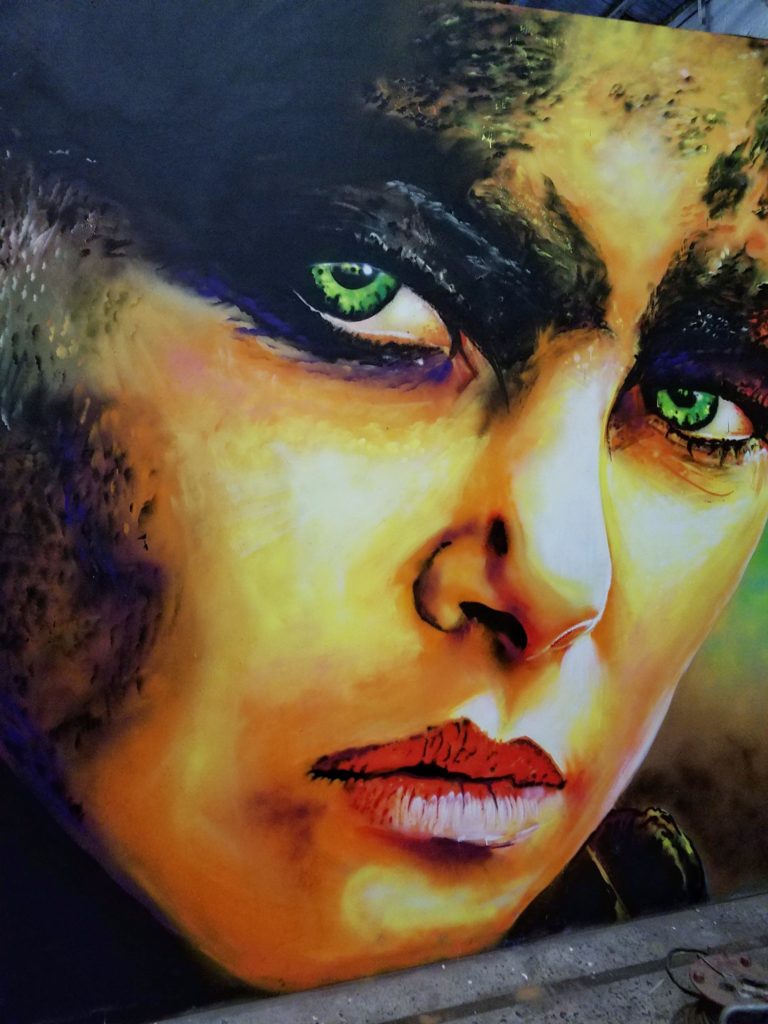 Some people think Street Art is just a mess, but it’s amazing what they can do with Spray Paint!

This tour only runs on Monday, Wednesday, Friday, and Saturday at Noon.

Other Tours by Alternative Berlin

I didn’t have the time to hit these other ones up, but they certainly look fun!

Also, check out these other offbeat activities, place to get coffee before or after your tour, or even a day trip to Warnemunde!

[…] Berlin and I can tell you this: you won’t be disappointed. It has 1.3km of a lot of history and striking street art. It’s a collection of murals which someday in the past divided the city, take your time to […]

This looks so cool! After the 2 hour walking tour part, does the make your own graffiti actually last 3 hours or what else does that remaining time entail? And do you just do your artwork on a canvas or on a wall as well? Thanks!

Well, I was there for about 3 hours because I was really taking my time, but you’re able to leave when you want. The art is just on a canvas. I would’ve liked to paint on the wall, but I couldn’t bring the wall home with me!

Spot on with this write-up, I actually feel this web site needs much
more attention. I’ll probably be back again to read through more, thanks
for the advice!

This is the coolest and most unique thing I have ever seen to do in Berlin. I adore your artwork. We are planning a big European trip in 2019 and this will definitely be on my list!

Thanks so much! They helped me so much; they will definitely help you too!

this is such a cool post and you look so cute! I am dying to see anywhere in Europe at this point, never been!

Girl, we gotta get you out there! Let me know if you need help planning!

I love street art. I get bummed when people think it’s just vandalism. What a great review and very informative!

Well, the tags I still kinda think are obnoxious, but at least it’s more interesting to me now. Especially knowing how they managed to do it! But if someone ever spray painted my house, I’d be pretty pissed!

Berlin street art is super cool – I will never forget the art murals on the remaining sections of the Berlin Wall; for those of us who are too young to remember the Cold War, it’s a sobering reminder. Walking tours are the best way to explore European cities; I loved the Free Europe tours of Prague, Munich, and Barcelona while i was backpacking.

Especially that free part! But you’re right, walking is so much better to get the vibe!

Super cool guide ! It’s crazy that you saw a mural by the person that did one in Panama! I’ll definitely do something like that next time I’m in Berlin!

So crazy! And Panama was…. three years ago?? But it was so distinctive, I remembered! My guide said he goes all around the world!

I’ve done the Free Walking Tour in Berlin and it was honestly the most interesting and insightful tour I’ve ever been on!!
When I was in São Paulo I tagged along with a free graffiti walking tour only because the “cultural” tour was too far from my accommodation and oh my word it was incredible! I didn’t realise just how much goes into creating one piece of street art!
I’m actually heading to Berlin next month but I’ll only be there for 24 hours and didn’t want to redo all the typical tourist stuff I’ve already done there, so I’ll definitely keep this tour in mind!

That’s actually one of the main reasons I did it is because I wanted to try something a little different! I hope you do and enjoy it!

Berlin is one of my favourite cities to visit but I am always going to the museums. I have never thought of doing a tour looking at stree art but after reading your post I am definitely keen to give it a try.

You get to create your own graffiti??? That’s so neat! If I ever find myself in Berlin, I’ll try them out!

Definitely the selling point for me!

Did the Pub Crawl with them and absolutely loved it. They are such a great bunch and take you to the coolest places. Really cool that you’ve left your mark on the warehouse walls of Berlin 😉 will have to try this tour with them the next time I’m in town.

I like that they have a different vibe! You totally should! It was so fun! I actually wanna try some spray paint now that I’m home!